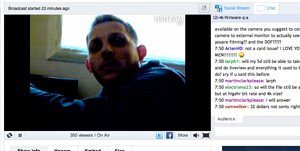 If this is legit it’s gonna change the way we shoot HDSLR:
Right now someone called Earz62801 is (update: was) broadcasting via webcam on ustream. He’s answering questions about a firmware hack he claims to be releasing this Saturday. Join the broadcast here

There’s still no evidence that the said firmware exists, all we have is this nameless guy’s word, but after listening to the guy for 30 minutes I can confirm that he’s probably not a crackhead but at least knows a little hdslr tech. I can’t think of a motive for a hoax of this kind but please take everything you hear with some grains of salt:

This is how it’s supposed to work:
– U can use Canons firmware, u can use Magic Lantern Firmware, you gonna drop the new firmware “on top”.
– U extract the new firmware to a memory card.
– U setup shot in normal firmware and then activate new firmware.

More stuff he said:
– No liveview.
– Says better moire behaviour with his firmware.
– Hates the hackers who ask the hacker stuff. He’s not disclosing info now. U can play with the firmware once it’s out.
– No 25p also for future releases.
– His associate is the programmer, he’s the “helper”.
– Says he hasn’t slept for 6 days (you could tell)
– First firmware versions are free so they can get feedback, gonna make money of it later on.

Even more stuff he said (thanks to user tolstis):
– 60p in 1080p mode possible
– Color-Space 4:2:2
– Moire and aliasing “fixed”
– Writing 6 Seconds of 4K footage to card takes about 30 seconds.
– No playback in-camera
– Has built in limiter so you won’t brick your camera
– Battery will be sucked up pretty fast.
– Will NOT record in 16:9 (coming in future release)
– Monthly updated planned on each months 1st
– “Rolling Shutter isn’t much of an issue”
– No drop frames
– Sourcecode will also be released
– Works only with fast Class10 cards
– Working cards are: Sandisk Extreme III class 10 8gb and above. Transcend class 10 16gb and above and Lexar Pro class 10 32gb.
– 7D Security is a pain in butt because of firmware counter. So no support yet.
– Not T1i (they don’t have one)
– Development took about 2 month in total

Some of what I heard sounded reasonable, some sounded fishy. Let’s wait and see what will happen on Saturday at 11:11. We’ll keep you posted.