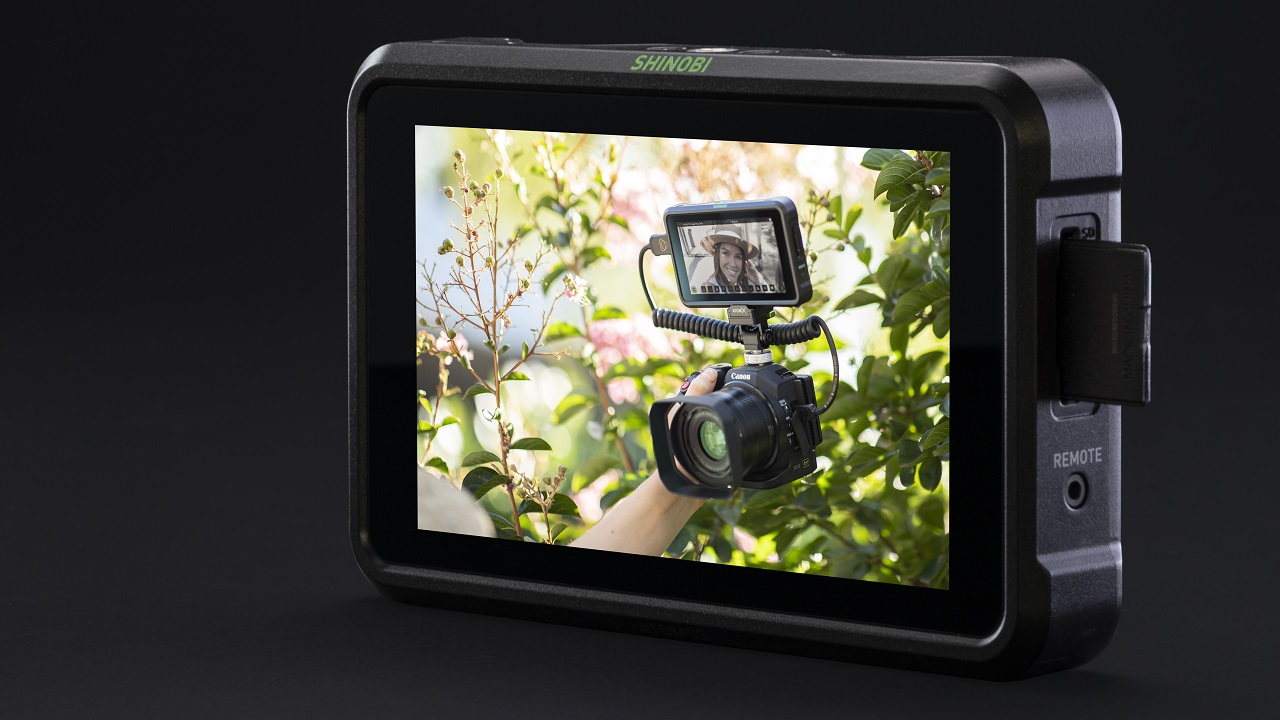 The Atomos Shinobi is a new 5″ HDMI on-camera monitor with a 1000nits 1920×1080 HDR screen, known from the Ninja V. It is lightweight, runs on one Sony NP-F750 type battery and offers lots of features to help monitor the image and even sound levels. It is shipping now for $399 USD (and €399) plus tax. 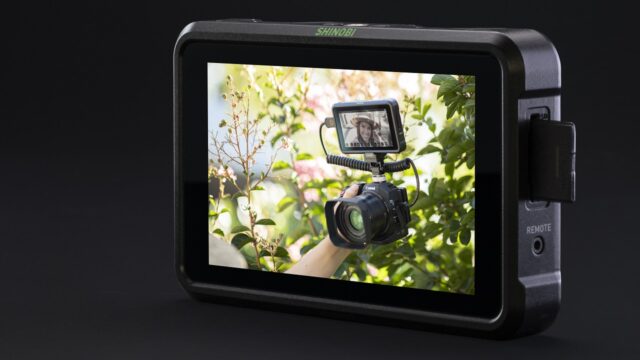 In the industry, Atomos is mostly known for their HDMI and SDI on-camera video recorders, which happen to have great, bright HDR screens. The company is now launching their newest addition to their portfolio – a high brightness 1000nits 5″ 1920×1080 HDMI monitor, named Atomos Shinobi. The specs sound familiar? That’s right – it consists of the same HDR monitor as the popular on-camera recorder Atomos Ninja V.

With its 200g (7 oz), the Shinobi is a lightweight device. For reference, the Ninja V weighs 320g (11.3 oz), not including the weight of the battery. The body of the monitor is made out of polycarbonate and should be durable. It has ¼” – 20 mounting points on the top and bottom, to allow flexible mounting. There is a headphone jack on the side, which allows users to monitor audio from most cameras – even if they don’t have a built-in audio headphone jack (So sound travels via HDMI). Clear on-screen audio level meters help monitoring audio, too.

As mentioned above, the Atomos Shinobi shares the same HDR 1920×1080 display and color processing found in the Atomos Ninja V recorder. The 1000nit brightness screen makes it easy to monitor the image clearly, even in daylight.  It has a pixel density of 427 PPI (pixels per inch) and is factory calibrated for color accuracy. The screen can display 10+ stops of dynamic range, when being used with Log or HLG HDR outputs. Atomos’ color science gives a complete range of in-built gamma presets to match popular cameras when shooting Log or HLG. 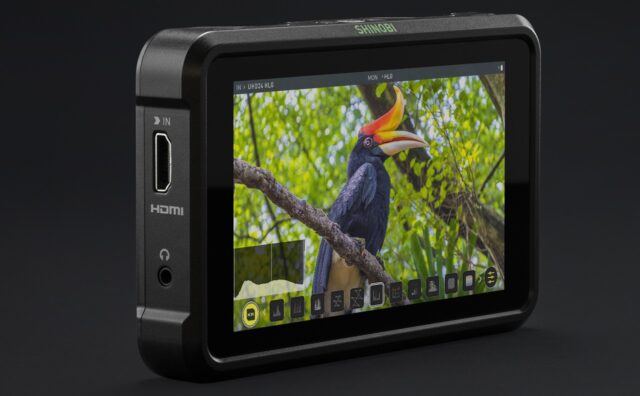 There is one HDMI-in port and a headphone jack on the left side. Source: Atomos

The Shinobi can run for up to six hours on a single Sony NP-F750 type battery, which lots of filmmakers probably already have in their kit. A clear on-screen battery gauge shows the status of the battery, indicating when it is running low. The battery plate is positioned in the centre for better balance when mounted to mirrorless cameras. There is one HDMI-in port, which can accept signals up to DCI 4K (4096×2160) at 30fps, or HD video up to 60fps. 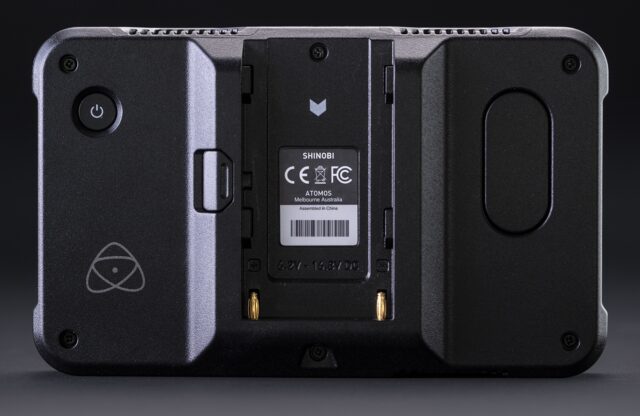 Atomos Shinobi uses the AtomOS 10 system with the same touch-screen interface as all the other Atomos products. It allows users to quickly magnify the image or engage peaking to check focus, pull up false color, a histogram, zebras or waveform to gauge exposure, or add guides or markers to aid composition. With one swipe, all of the menus go away for a totally clear view of the image and its framing. 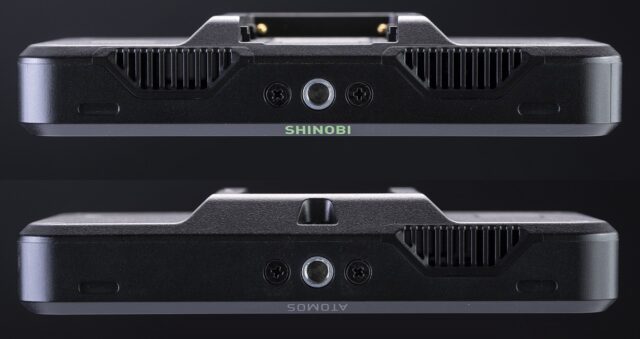 The Atomos Shinobi looks identical on the top and bottom side. Source: Atomos

For Log image monitoring, it is possible to easily load compatible LUTs directly into Shinobi’s built-in memory via SD card. The internal memory can take up to eight LUT files. In addition, countless LUTs can be kept on the SD card and loaded when needed. The same SD card slot can also be used to install any future firmware updates.

Atomos’ new multi-tool called Analysis sounds (and looks) quite interesting to me. It simultaneously shows the image, plus waveform, histogram, vectorscope and audio-level meters. In addition, there are multiple options inside each of these tools. This gives the operator a complete picture of what is going on within the image, at any time. 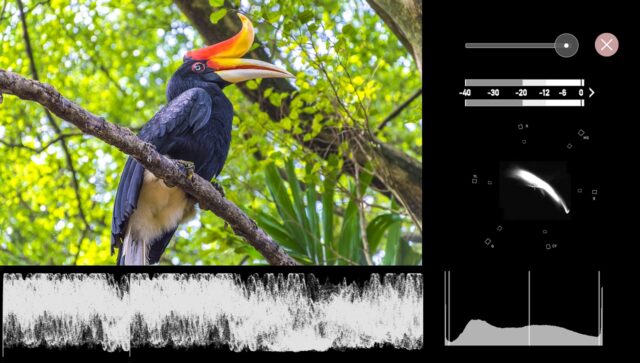 A major benefit of Shinobi is that it can be properly color-calibrated, using the free Atomos software and the X-Rite i1Display Pro probe. All monitors’ colors drift over time and routine calibration ensures that the colors remain as accurate as they originally left the factory. Also, there is a flip-screen function which mirrors the image – a valuable feature for vloggers.

The Atomos Shinobi is available for purchase now. The price is set at $399 USD (€399 in Europe) plus local taxes. I can see this bright monitor appeal to lots of mirrorless filmmakers, who don’t like external recording, and maybe even to beginning focus pullers, as the brightness is quite impressive.

What do you think about Atomos’ latest offering? Do you use a monitor for your work or is the camera’s viewfinder more than enough? Would you choose the Atomos Shinobi over the Ninja V? Let us know in the comments underneath the article.