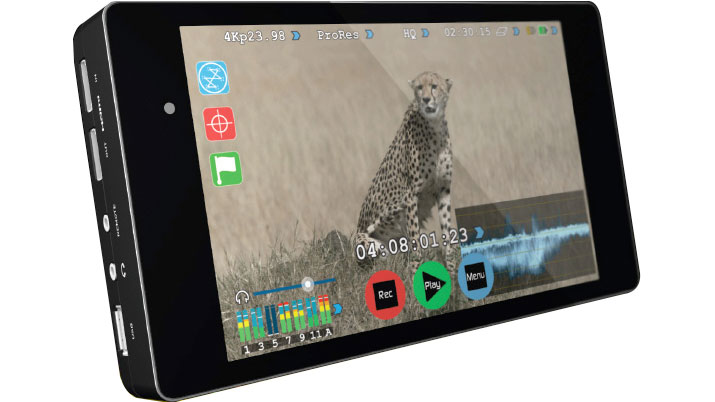 Atomos has been incredibly prolific with new releases this year. Cine Gear last month saw them enter into the recording media market with their CFast card line, and earlier in April at NAB they announced two new on-camera recorders.

Their 4K Shogun recorder was perhaps their highlight of the show, which is now available for pre-order.

In case you missed it, here is an interview we put together with Jeremy Young of Atomos discussing the Shogun recorder.

The Shogun gives us HDMI in/out, 3G SDI in/out as well as genlock and lanc peripherals. You can also get balanced XLR audio via a lemo breakout cable. mic/line level plus phantom power is also supported.

Like all Atomos HD recorders we get all flavours of 10-bit Apple ProRes 422 and Avid DNxHD in 1080, as well as the same ProRes support plus Cinema DNG Raw in 4k.

The Shogun has a slightly larger screen than other Atomos recorders, providing a 7″ IPS display. The screen is calibrated to SMPTE Rec. 709 with 100% gamut and D65 white point, and is compatible with the Atomos Spyder screen calibrator. Like all previous screen based Atomos recorders, the panel is touchscreen, and utilizes a 2.5″ bay for HDDs/SSDs. It’ll also take a 2TB RAID drive to deal with 4k data rates, holding around 2 hours of 4k footage.

Users of Atomos recorders will be familiar with the start/stop recording control via SDI/HDMI. In addition the Shogun also offers control over wifi with smart devices.

3D LUTs are also introduced for acute monitoring control and viewing. I have an upcoming video review of the Ninja Blade and feel this was a missing features with the fullHD recorders.

This product will be a great partner to the Panasonic GH4 and/or Sony A7S. In the perfect world a smaller screen would’ve been more ergonomic for smaller mirrorless cameras, but for 4K footage monitoring there needs to be a compromise. Early pre-orders of the Atomos Shogun get a free Atomos Spyder Calibrator.