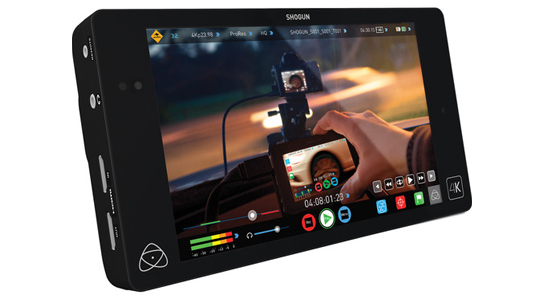 The official release date for the Atomos Shogun 4K recorder has been pushed back. CEO of the Australian based company Jeromy Young has spoken out, stating that whilst units are ready to ship, the firmware isn’t quite there.

“First of all, I’d like to thank everyone for the positive comments and support we receive on a daily basis for Shogun. It is truly overwhelming.

To all those at recent events and trade shows excited to see the Shogun first-hand and the filmmakers who are eagerly waiting for the Shogun to unlock the potential of their 4K camera, we thank you for your support. In particular to those who have made official pre-orders on Shogun we value your loyalty and have worked with our resellers to ensure the initial batch of Shogun units are shipped to you first.

With the original launch date now passing, I felt it was important to personally address where we are at with the release of Shogun. In terms of hardware, we have closely monitored the build of the first production units and are proud of the manufacturing quality. There is nothing preventing us from shipping the Shogun and its accessories from a hardware perspective. Although the Shoguns are physically built and ready to ship, the firmware is taking longer than expected to finalize taking into account our high standards of reliability.

We know that the cornerstone of our success in the last 4 years has been delivering the technology professionals need at the right time & price without any sacrifice for reliability & performance in the field. So while we feel everyone’s pressure to have Shogun available, we refuse to release a single sub-standard Atomos feature. We will not treat our community of users as Beta testers and will not release the Shogun until the standard we are famous for has been met.

We absolutely understand everyone’s disappointment and appreciate that many shoots have been planned around the Shogun becoming available. We ask that you continue to be patient as we finalize our firmware and release a product that will be worth the wait.

We expect the product will be delivered within days of the final firmware becoming available and expect all back orders to customers to be fulfilled by Christmas.

Thank you to our community of Atomos users, our team continues to be inspired to make better products based on your creativity and feedback.

We first caught the Atomos Shogun at Nab 2014, it looks like a fantastic on-camera recorder; the perfect partner to the Sony A7S that will only record 4K via the HDMI output.

Whilst the 4K and raw capabilities of this device are no doubt among its USPs, the Shogun shouldn’t be known for these features alone, it’s not simply the 4K version of the Samurai/Ninja. Firstly, the main difference between the Ninja and Samurai is the fact that the former is HDMI and the latter is SDI.

The Shogun is both; it will receive and output either peripherals thus enabling an internal signal conversion (HDMI/SDI IN/OUT).

It’s often been a marketing ploy to reserve a particular product for SDI or HDMI only (Atomos themselves are a perfect example of this with their Ninja and Samurai recorders).

It’s great to see that the Shogun offers both; a feature I’m hoping becomes the norm for all monitoring/recording/conversion devices.

Another overlooked feature is higher frame rate capture in FullHD resolutions. The Samurai and Blade recorder max out at 30p/60i, so it’s great to see the Shogun supporting up to 120p in 1080 (up to 30p in 4K).

Finally the lemo breakout to dual XLR in/out is a great feature for enabling professional audio workflows. You can now output from your sound device/mixer directly into the recorder via XLR, without having to rely on consumer 3.5mm jack.

None of this is fresh news, but it often gets overlooked just what this device packs. Here’s a specification list of the Atomos Shogun