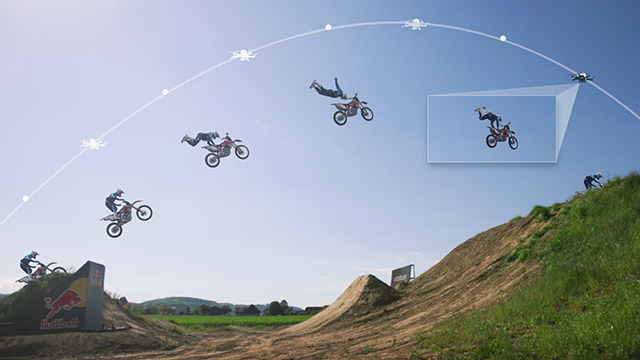 A few weeks ago we stumbled across a company called NextLevelAerialFilming, a company producing interesting looking auto pilot software for drones.

Before we had a chance to gather all relevant information for a blog post, they’ve managed to release a Kickstarter campaign with their own autonomous drone and smash their target by over 10 times.

A competitive company has also pulled through the ranks of crowd sourced funding, releasing a similar automatic drone system also reaching their goal.

So, what are autonomous drones? Simply put, they are automatic flying devices. Think a DJI Phantom minus the remote control. An autonomous drone will use GPS to track its subject; no further application is necessary, the drone will fly itself. First we’ll look at how the Hexo+ works, which is the first product produced by originally named company – NextLevelAerialFilming.

The Hexo+ is a 6-blade drone with 2-axis gimbal compatible with the GoPro 3+. Using GPS it tracks the relation between the drone and your smartphone, and using the smartphone’s app you can alter the framing of your shot via altitude and distance. Set your device up with the app, place your smartphone in your pocket and go.

One aspect that may spring immediately to mind is safety. The Hexo+ features “Fail-safe software features and six propellers mean a safe landing in case of a problem”. A little vague and this doesn’t cover collision with other objects, I asked the question to Hexo+ creators and this was their response:

“Safety is our first concern and priority. From all of our tests, it shows Next Level Aerial Filming device improve(s) reliability and safety from drones and I truly believe using computing to fly drone is much better than piloting it yourself.

Part of the team are experts in embedded aeronautical software….. everything we develop is safe. We implement lots of failsafe scenarios to maximize safety. We have not yet looked at obstacle avoidance, but this is something which we plan to do in the roadmap.”

So for the mean time, whilst the software is optimised for safe flying it does not cater for obstacles, so keep these devices well clear of areas where collisions could occur.

There’s a host of different rewards packages on the Hexo+ Kickstarter page, $999 will get you the drone, 2D gimbal, app and GoPro Hero 3+ Black Edition. The next autonomous drone to be mentioned is the also successfully funded Kickstarter AirDog. AirDog works in the similar way to Hexo+ using GPS to track the subject, however perhaps in a less graceful manner the AirDog requires the AirLeash remote in order to work. It also utilizes a 2-axis gimbal compatible with the GoPro Hero 3+.

The AirLeash is a waterproof remote that you attach to you person (wrist, pocket helmet); the AirDog shares GPS information with this remote. You can also make flight adjustments via the button pad. AirDog has justified the use of a remote over sole smartphone use (like the Hexo+).

They state that the GPS signal in their remote is stronger and more reliable, and claims it’s also a much better form factor for extreme sports, with specific reference to the fact that it’s waterproof.

AirDog does have its own dedicated app also, so further adjustments can be made here. They also provide a selection of flight modes to cater for certain situations. To name a few these include the drone position relative to its subject and magnet north, circulating continually around its subject, and simply tracking behind the subject at your required altitude and distance.

As filmmakers, the autonomous drone maybe a frightening prospect; you have no control over your shot as it is happening. However these are not necessarily targeted directly at filmmakers, the immediate target audience are the subjects themselves. There is autonomous hardware and software available for filmmakers, offering more control, albeit at a much more expensive cost. We could see a lot less GoPros on the ends of poles and helmets, and more cameras trailing extreme sports enthusiasts 10 feet behind in the sky.

The success of both these Kickstarters is just a glimpse of the potential demand in this market. Both have reached their goal with relatively little time pledged. Hexo+ has been particularly successful, pledging $50,000 and currently sitting at a little under $550,000.