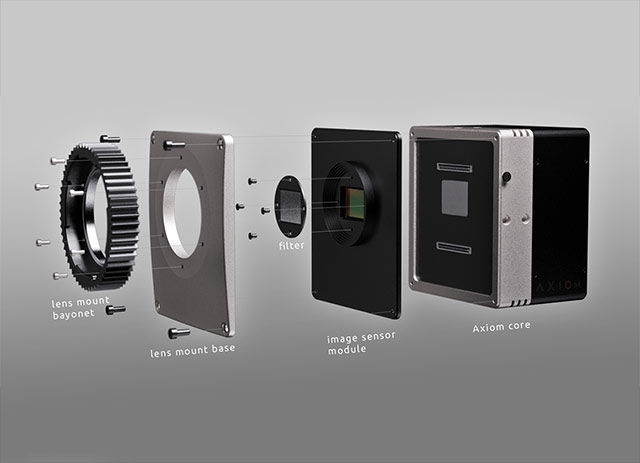 We’ve been following the development of the Apertus° Axiom camera which has been going on for quite a while now. It’s a serious, affordable cinema camera with all the features indie filmmakers could wish for.

If you’re not familiar with this project here’s a summary: The Apertus° Axiom camera development was started by independent filmmakers with the idea of a small sized, hardware updgradable, open source software, 4K camera that can do 150fps at full resolution featuring a global shutter and 15 stops of dynamic range at a price “well below $10k”.

Today Apertus° presented their “extended Axiom open module concept” describing in more detail what they are going for in terms of hardware upgradability.
We already know the lego approach of how different modules could be combined behind the camera head (sensor) to form a wide range of camera hardware compounds.
This new concept announcement shows how the sensor as well as the lens mount will (probably) be swappable.

They are also thinking about offering different sensor vrsions ranging from “Super16, Four Thirds or Full Frame Sensor or a module that allows fine-tuning the sensor alignment shift for Stereo 3D”. They advise however not to change sensors while in the field with “an approaching sandstorm” emphasising the fragility of said component.

In terms of mounting options they plan on using the “IMS Mount system from P+S Technik, allowing us to mount: PL, Canon EF, Canon FD, F-mount, B4, C-mount, Leica M, Leica R, panavision and BNC-R lenses to the Axiom.” and say they want to make the IMS mount itself interchangeable as well.

To cover the development of Axiom Apertus° say they will soon launch a crowd funding campaign and start taking pre-orders. So far it seems they are still working on perfecting the prototype.

More info on the Axiom minisite