Bright Tangerine, a UK based manufacturer of professional camera accessories, announced a couple of updates at this year’s NAB show. Robert Eagle of Bright Tangerine talks us through their new products, namely the Titan articulating arm, a new kind of filter tray and their Revolvr follow focus.

There’s no question about it, the Titan was the spotlight product at the Bright Tangerine booth. It’s a fresh approach to a classic pro-camera accessory: the articulating arm. The Titan has some unique features to it such as the ability to lock it down on two joints while the third pivoting joint remains adjustable. This means your director won’t break the arm (or the camera) when trying to turn the attached monitor towards him/her. 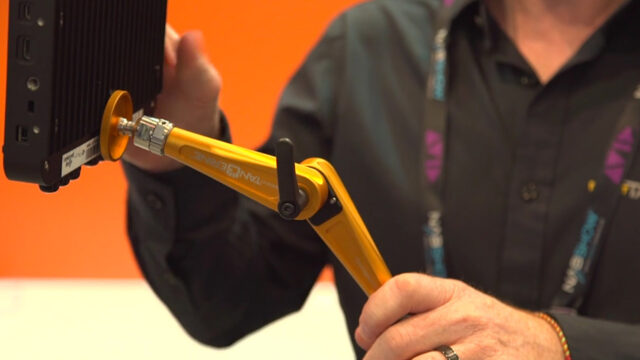 The arm has a massive payload of 16 pounds (8kg), which is more than you’ll ever need. Actually, you should be careful as an 8kg payload will probably break your camera’s mounting point before the weight will drive the Titan to his knees. One can assume the engineers at Bright Tangerine wanted to build a product like a tank, which will serve you well in every shooting situation.

The arm is self-supporting, so even when it’s completely loose, it will hold your valuable monitor and won’t let it crash. It’s self-servicing, too: you can disassemble it on your own and repair it if needed. One of the most common scenarios of breaking an articulating arm is to overtighten it. Not an issue with the Titan, as it has a built-in deadpoint, which prevents this. After having broken so many articulating arms myself, I’m happy that finally someone came up with a solution like this.

The Bright Tangerine Titan is set to be released in about 9 weeks, and will be around $250.

Bright Tangerine is well-known for their line of matte boxes and accessories such as the Strummer DNA or the MisFit Atom. At NAB 2016, they announced a neat new accessory in the form of a filter tray called the Gripper tray. 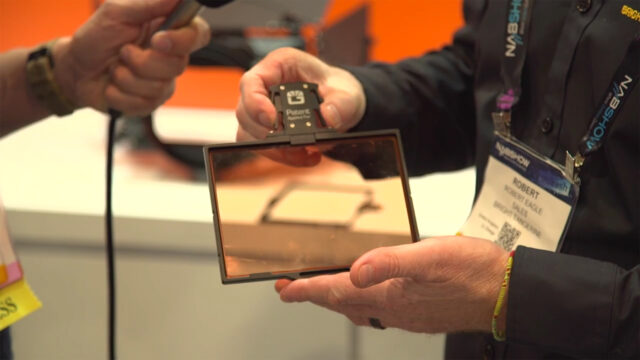 This tray has a new kind of quick lock mechanism, which, according to Robert, is even possible to operate with a pair of gloves on. Could be useful for on-location productions like The Revenant, for example.

Bright Tangerine announced their new follow focus line back at IBC 2014. Now, it’s almost ready for the filmmaking community. Robert told us it’s due for shipping this summer.

The Revolvr has been designed to be a very high end follow focus, and is a very modular system with a ton of features, so it’s not really on the cheap side. The price ranges from $1,598.95 for the Mini Kit up to $3,798.95 for the full 19mm rod Studio Kit. Check out the company’s website for more information!