In this Canon 18-80mm review I’ll be finally taking a look at Canon’s compact servo video lens. It is one of only a few such lenses made for large-sensor cameras, has a “cine” touch with autofocus functionality and could be a very useful asset for many large-sensor shooters. 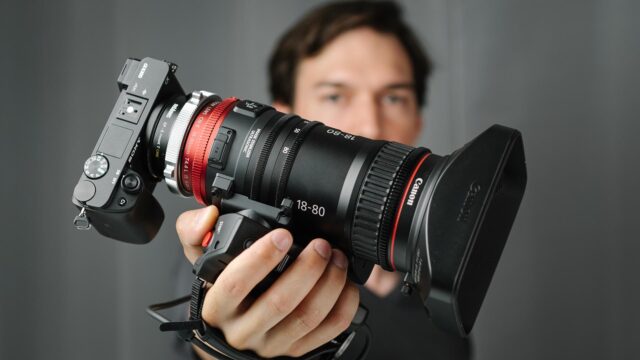 Back when the Canon CN-E 18-80mm T4.4 Compact-Servo Lens was announced in 2016, many large-sensor video shooters had their eye on it as it seemed to combine the lightweight design of photo lenses with some “cine” properties and offered a zoom rocker, all at a relatively affordable price. Later we noticed that this lens, marketed as a “cinema zoom lens”, had no hard stops, making it quite hard to use as an actual “cinema lens”. But regardless of the “cine” labelling, this lens still looks pretty interesting for many large-sensor shooters, so I took it for a test drive to the park (see video with test shots above) and put it on the test bench.

Canon 18-80mm – Most Important Features at a Glance: 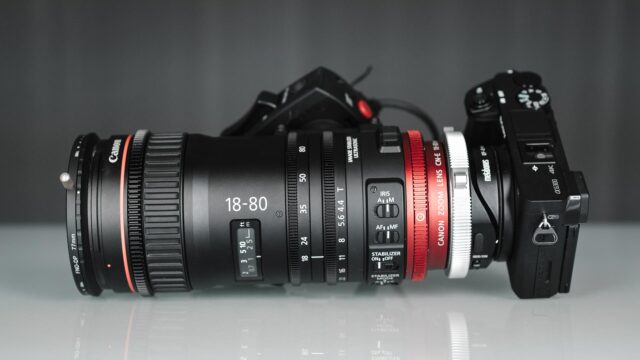 Hands-On Experience with the Canon 18-80mm

Compact cine lenses are awesome. In my book, the Canon 18-80mm already has a plus, just because it is so small, lightweight and thin! In terms of size, it is comparable to the FUJINON MK Cine Lenses. I recently reviewed both the FUJINON MK 18-55mm and the MK 50-135mm.

By now I think I have tested all compact and “affordable” cine/video lenses on the market, and this field is still very young. Manufacturers are only now slowly starting to realize that photo lenses simply don’t cut it for most large-sensor shooters, and that we need video equivalents with a large-sensor coverage. In the case of the Canon 18-80mm, it works with Super 35mm and APS-C sensors, and I used it on my small but capable Sony a6300 to put it to the test. Unfortunately I didn’t have much time, so this test shoot was not as elaborate as some of my previous ones. I had, however, worked with the lens on a different project before, so I already had a pretty good idea of how well it performs.

The focal range of 18-80mm is the first thing you should bear in mind when considering this piece of kit. Sony offers a 18-110mm lens that arguably has the best range in this field. However, one should keep in mind that the change in field of view is exponential, so the gap between 81 and 110mm on the Canon lens is not as large as it appears. During my shoot, for example, I noticed that I was able to zoom in more than I expected. In practice, the 18-80mm range is limiting, but does offer an extra tele “touch” when compared to a lens like the FUJINON MK 18-55mm for example, and is definitely very convenient to use this lens as a wide-angle and mid-range zoom. For me, the servo is the biggest thing about this lens and it is a delight to use. Not only does it allow you to get a nice grip on your lens (and in my case also the camera, seeing as the  Sony a6300 I used is so small), but it also has a smooth motor that lets you control your focal length much more precisely and quickly than with any other lens at this size and price. In comparison to the Sony 18-110mm Cine Lens (Review Here), Canon’s servo feature is in a different class entirely. The Sony only has a miniature zoom rocker and offers less precision. 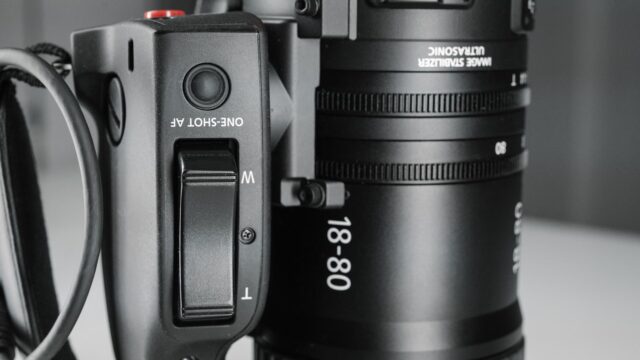 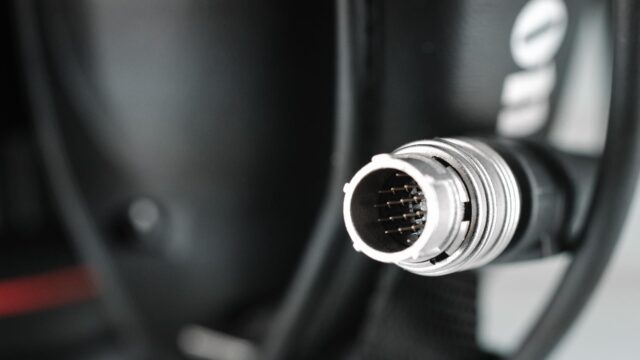 In terms of speed, the servo of the Canon CN-E 18-80mm T4.4 gives you a large amount of control. You can quickly zoom in, get your focus and zoom out, as it holds focus at any focal length just like cine and video lenses should. In terms of smoothness, I must say I did expect a little more. I felt the servo of the Canon 18-80mm had fewer steps of speed than professional and more pricey video zooms. During the last test shot in my video, I zoomed in and out on that tree and as you can see it was a bit hard to get a completely smooth zoom. I would not use this lens in a broadcast environment where smooth zooms are sometimes crucial. 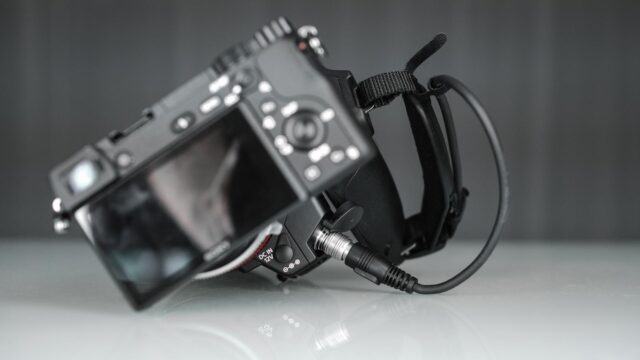 Servo Cable of the Canon 18-80mm T4.4 obstructing and being stressed when the camera is on a flat surface.

Another thing that bugged me about the servo is the cable that connects to the lens. It sticks out and points down right into my wrist. After only a few hours of shooting with the lens I already had a bruise. Another downside of this design is that the connector is the main point of contact when I put the lens down on a flat surface. This is especially true when the lens is used with a small camera like the Sony a6300. Zacuto sells a solution to this problem –  the Zacuto Right Angle Extension Cable – but in my opinion they ask for a ridiculous amount of money for it. If the cable is a problem for you, another solution would be to simply have a right angle connector soldered onto the lens. If you don’t need the grip, note that it can easily be detached. Unfortunately, a tool is necessary to move or even reposition the grip. 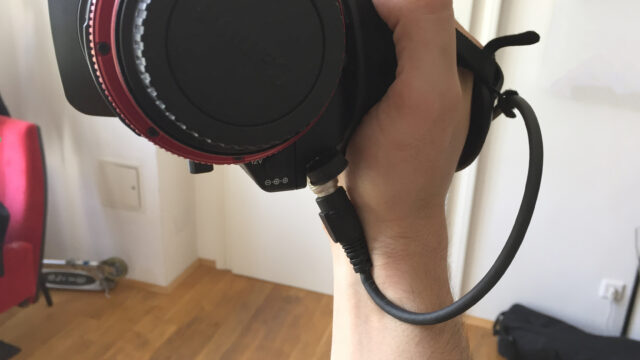 Cable that connects the servo with the lens, sticks out into the wrist.

Another positive thing to say about the servo is that it works with Metabones adapters on Sony cameras and gets power through the lens mount. All in all, I really like the servo on the Canon 18-80mm T4.4 and the convenience of it alone is a reason to get the lens, even though it might not be up to broadcast standards.

The Canon 18-80mm T4.4 has a gear ring for focusing with a follow focus or remote focus, but lacks hard stops just like with traditional Canon photo lenses. Video shooters and cinematographers alike will have a more difficult time controlling focus, especially when using focusing tools. One could argue that the lens is not intended for cinema applications – frankly I find the lens is a great option for single shooters, a setup which rarely requires a follow focus. However, marketing the lens as “cine” can be misleading for customers and I am not a fan of that. 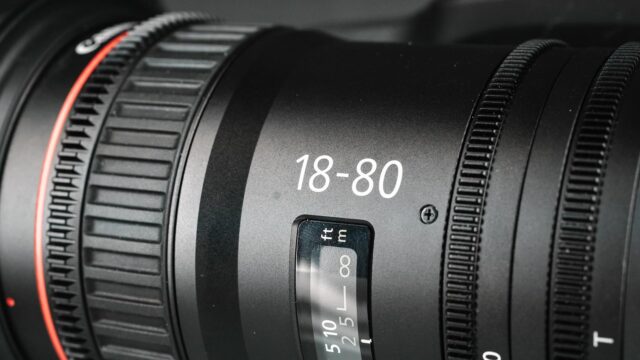 According to Canon, they had to incorporate soft stops on the lens in order to achieve the much-applauded Dual Autofocus functionality. I must mention that the Canon Dual Autofocus system has impressed us and really makes autofocusing an option in the world of large sensor shooting. For many, myself included, the tradeoff with the hard stops is acceptable as long as we are aware of the lens’ limitations.

For my Canon 18-80mm review I grabbed our test chart and took some shots that I compared to the Sony 18-110mm F/4 lens. I noticed that the Canon seemed to have good optical qualities altogether, both in these test shots as well as in my short video. I noticed very little chromatic aberration and, as far as I could tell, the lens had a little less sharpness in the corners compared to the Sony 18-110 (without digital optimization), but it was still ok in my book. There is one aspect in which, in my opinion, the Canon falls short in comparison to the Sony 18-110: the Sony offers in-camera optimization which basically entirely removes the optical flaws of the lens. This is a killer feature. On the other hand, the Sony lens cannot be used on Canon cameras.

Distortion appeared stronger on the Canon than on the Sony, although I had disabled Sony’s digital optimization feature for my test shots. The Canon also seemed to exhibit more vignetting. I would say the distortion on the wide end is comparable to the FUJINON MK 18-55mm, although the problem of the FUJINON is that it distorts strongly in the opposite direction as soon as you start zooming in. This is not as pronounced on the Canon 18-80mm T4.4 (see screenshot below). 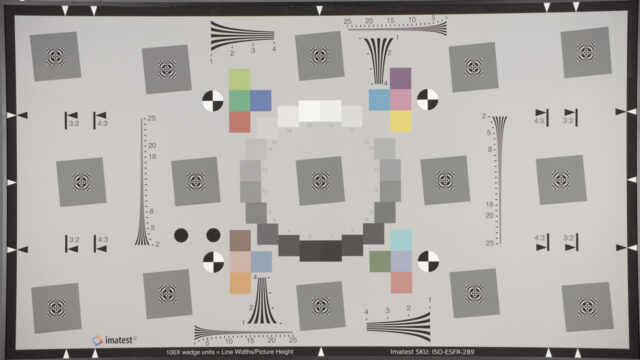 Another great thing about the Canon is its minimum focus distance. Although there is no macro, a distance of  1.6′ / 0.5 m at 80mm allows you to get some decent close-up shots. I was surprised at how close I could get to the bees in my test video. The Sony 18-110mm F/4.0 lens is less convincing in this regard with its 0.95m minimum focus distance (Review Here). 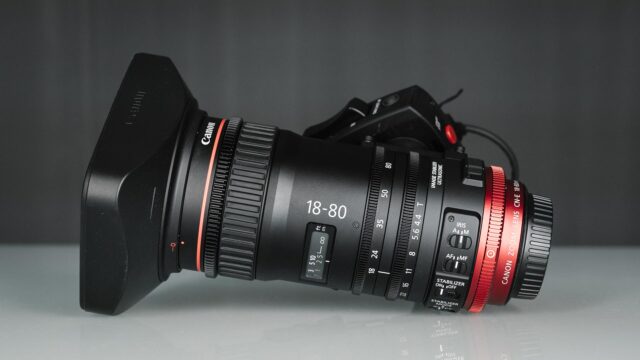 This is a good lens that I want to like, but the optical image stabilization of the Canon 18-80mm T4.4 doesn’t do it for me. It looks just like the stabilization you get on some Canon photo lenses, where the movement does not appear natural. I think this becomes apparent in my test video in the wide shot at 0:40, which I shot entirely handheld. The biggest problem for me is that the rotation axis is not stabilized well – if at all! – thus resulting in distracting mini rotations in almost every shot. For a lens that costs over $5,000, this is a bit upsetting.

There are three optical stabilization settings (A, B and C). It seemed like mode B and C are simply weaker. I used mode “A” for my test video, but if I use this lens on future projects I will be leave image stabilization off. 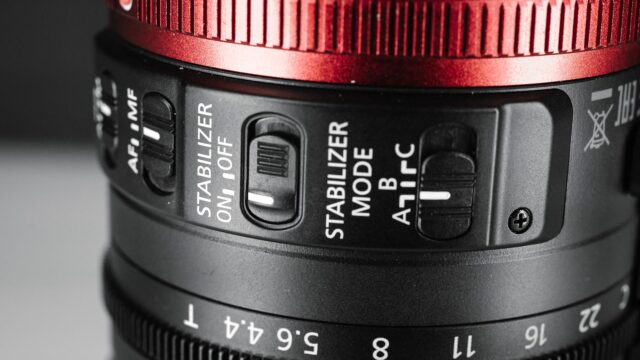 The Canon CN-E 18-80mm T4.4 Compact-Servo Cinema Zoom Lens is a very interesting lens. The idea of combining cine properties with the strengths of photo lenses to give you a lightweight and compact solution with a full servo grip is a great approach. Also, right now it is the only “cine” zoom of this type and price for Canon cameras.

When I started my Canon 18-80mm Review I think my expectations were a little too high. In my opinion, this lens has little “cine” about it (especially due to the lack of hard stops), so I will simply call it a lens with a”cine touch”. It is clearly a video lens that has inherited a few features from broadcast zooms thanks to its full servo grip. BUT, the grip is a delight to use. I wish I had something like that on all the lenses I use, and it is definitely the one reason to get the lens as it adds so much more convenience and improves ergonomics a lot. If you have no other grip solution, or if you want to revive your DSLR or mirrorless camera, look at the Canon 18-80mm T4.4. Even though the motor smoothness seems a little basic, I think the advantage of precise zoom rocker control can make a huge difference on documentary style productions.

Putting aside that the optical image stabilization is not the kind I would use on my projects, overall the lens offers a good balance between performance and size. If you’re struggling with photo lenses, you should definitely try the Canon 18-80mm T4.4 and experience the difference it makes. The price of over $5,000 may not make it a very attractive proposition for everyone but, if you can afford it, the Canon CN-E 18-80mm T4.4 Compact-Servo is definitely worth considering and we welcome it to the very small family of compact video lenses for large sensor cameras.