The outdoor activity camera concept from Canon will be a customizable rugged and waterproof camera with big carabiner on its body.

During CP+ 2019 show in Japan, among other camera concepts, Canon presented their outdoor activity camera concept. Saki from cinema5D talked with Watanabe-san from Canon development team about this new concept camera and its features. Please note, that CP+ is a local show taking place in Japan and as such, most japanese company representatives speak japanese only. We chose to highlight this product and bring you the video in japanese with english subtitles. 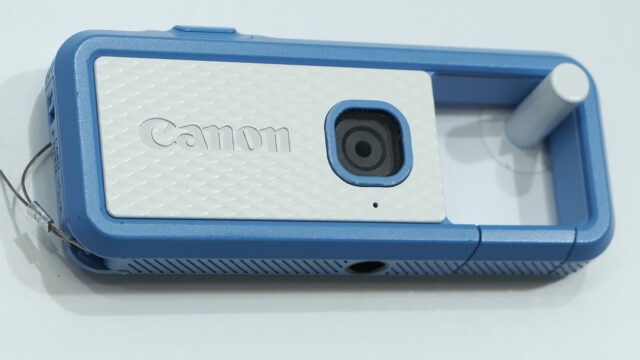 There are unfortunately not many technical details about this camera yet as it is still in the development stage. Canon only presented this device as a concept. We did not find out what kind of sensor is going to be inside, but my bet is somethng like the GoPro’s 1/2.3″ sensor size. The camera will have a fixed focal length lens. As we found out Canon aims to have 1080p 60fps recording capability in the device when it gets released. That’s all the information there is for now regarding image quality.

Canon is positioning this particular camera for situations where it is difficult to use smartphone for taking photos and filming. Watanabe-san mentioned snowy mountains, swimming pool or sea side. Therefore the camera body is waterproof and rugged. The camera’s design includes a rather big carabiner on the side that allows it to be clipped almost anywhere. 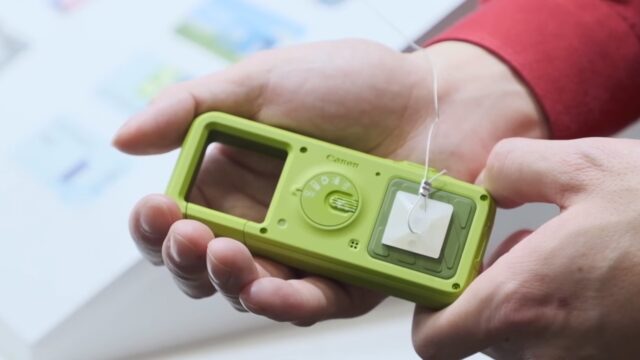 The front cover is removable and it is being held in place by magnets. Canon is aiming to offer many custom aftermarket designs to easily exchange the front panel and cutomize the look of the camera’s front panel. It will be available in various colors and designes – at CP+ only black, green and blue designs were presented, but Canon is considerng bringing even more designs when the camera gets released. As we can see on the photo – the black version of the camera – has a floating accessory mounted. That means when the camera gets dropped in the water, it will not sink to the bottom, but it will float. Kind of like the floating back for GoPro cameras.

On the back we can see a simple dial to switch between different camera modes. The camera will record the media to microSD cards. Slot for the card is on one of the short sides of the camera. There is no information about the price or availability yet. I expect the price to be rather low given the target group and the design of the camera.

What do you think of this concept outdoor camera from Canon? What specs would it have to include to be interesting for you? Let us know in the comments underneath the article.