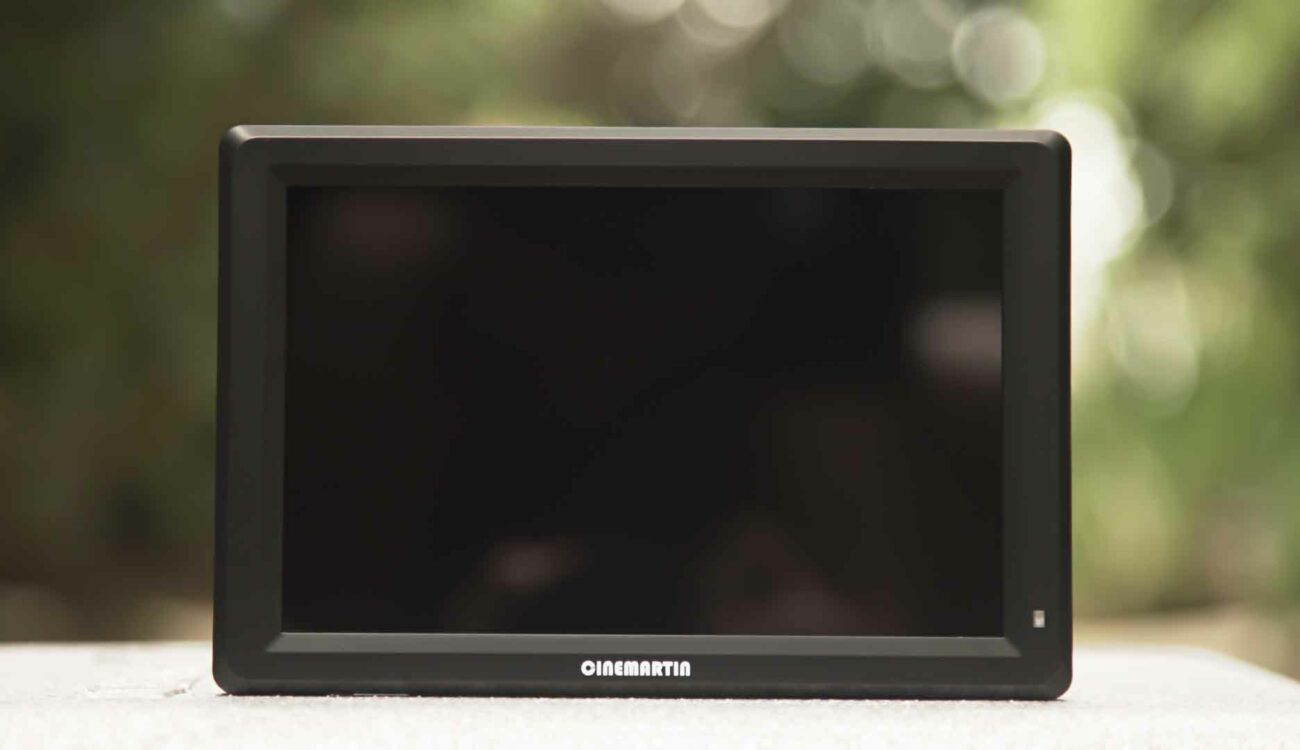 Manufacturer Cinemartin promises a great image and a whole host of tools in their new 3840×2160 550-NIT 1000:1 Cinemartin Loyal LT monitor, and all for one of the cheapest prices around. Does this monitor deliver on its promises? Let’s take a look. 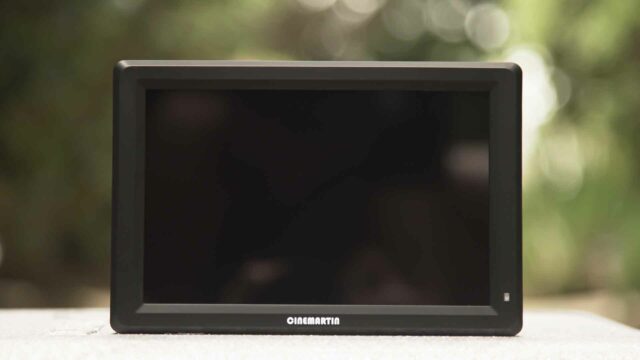 Author Correction: Since posting this article a few months back I have been made aware of several issues with this monitor and my article and I felt the need to update this post. The monitor is, as one commenter pointed out, native 1920×1080 (HD, not UHD as advertised) and should not have been titled as a UHD monitor. It seems likely that this monitor is being upscaled to UHD (3840×2160), at least in the case of the LOYAL LT S4K 7 version.  The title has been changed to reflect that.

In terms of cost the monitor is listed at 99€ on the website and I can’t find a Loyal LT monitor currently being sold for that. With shipping cost, this monitor will likely cost significantly more than advertised — no longer making it as attractive on the cost side.

Also, as mentioned in my initial post, the process of ordering is convoluted and should be undertaken with care. The company has also recently announced that this particular monitor line will cease production in June. – Graham Sheldon

We announced the Cinemartin Loyal LT monitor line back in January, and it was the price-tag that originally had me the most excited: for a full HD on-camera monitor. Too good to be true?

Actually ordering one from manufacturer Cinemartin is a bit of a process. Once you click the buy button, you’ll be given a reference code and are directed to contact their sales department, whose email is listed at the bottom of the page. So there are some kinks to work out here in order to streamline the process and become more consumer friendly.

Shipping is around $50 dollars or more through DHL (depending on your location) in addition to the listed pricing for the monitor itself.

For this review, I received the LOYAL LT S4K 7 inch, not to be confused with the 1920 x 1080 Loyal LT base model. The S4K version has a resolution of 3840×2160 and a brightness of 550 NIT, and will cost you around $200.00 once you purchase the shipping and accessories included in the Cinemartin “Shooters Kit”. The base model is slightly cheaper and is 50 NITs brighter.

The monitor comes in fairly standard packaging, and my “Shooters Kit” came with an HDMI cable (Mini Type C to Full Size), sun shade, Sony F970 battery plate and a small ball head cold shoe mount. The battery plate comes with lots of tiny screws, and you’ll need a very small phillips-head screw driver (not included) to mount the battery plate to the back of the monitor. 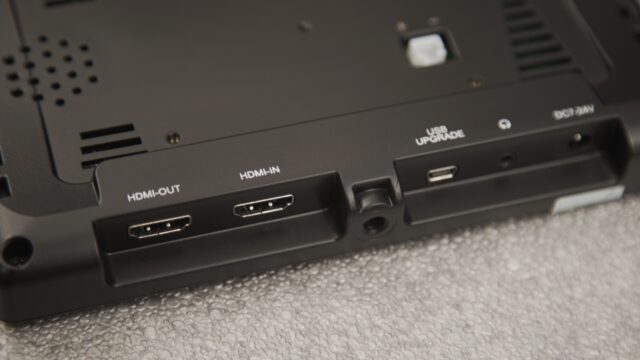 Lets get this right out of the way — the thin form factor monitor feels like it’s made from cheap plastic, but that does make for a very lightweight monitor that doesn’t even reach a full 1lb in weight. Given the build, this is not a monitor that will likely withstand extreme environments or even slight impact, but that type of performance isn’t necessary for all camera ops out there.

HDMI-Out and HDMI-In ports as well as headphone, USB, and DC ports all line the bottom of the monitor, with 1/4-20 mounting points directly in the center of the bottom and the top. 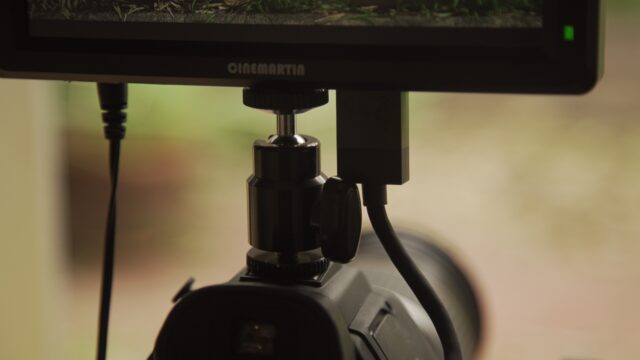 I plugged in an admittedly bulky HDMI cable into the monitor and attached the other end to my Canon C100. The included cold shoe mount comes very close to the HDMI cable and makes for a tricky fit (see above image).

Installation of the sunshade is particularly easy, though. It clicks right into place, requires no screws, and the shade itself velcros to a frame that clicks easily onto the face of the monitor. 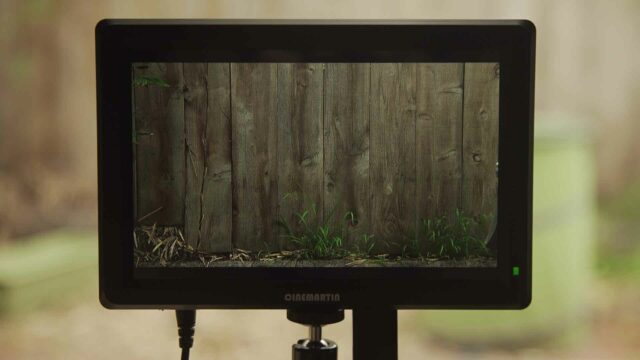 The monitor turned on quickly and connected with my Canon C100 instantly without needing to mess with any input or output settings on either the camera body or the monitor itself. To my eye, the image was very impressive and infinitely better than my Canon C100 display. The colors looked great and the image felt crisp and detailed all the way from the center to the edge of the monitor. Exposure was easy to judge as well. 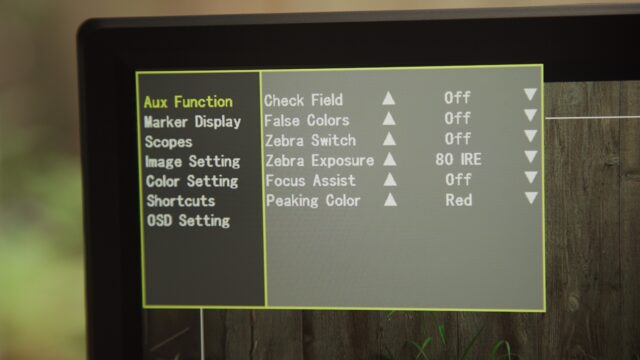 You can select a variety of different tools (see above image) from peaking to false color and even a histogram using a plastic wheel at the upper right of the monitor. I played around with a few of the tools and everything worked well. Peaking, in particular, worked as intended, but I would have liked to have been able to turn down the intensity of the focus assist.

Given the cost, you may want to pick one of these up even if you shoot on a heavier duty body than a DSLR. This could be the perfect backup monitor to throw in your kit for travel.

For me, the major selling points of the Cinemartin Loyal LT S4K still come down to weight, image quality and price, even if it isn’t as cheap as first suspected. With its HDMI inputs, this is clearly a monitor aimed at the DSLR user, and the weight is a major plus for that type of shooter. For the price, there aren’t many other competitors out there that can deliver great looking UHD resolution on such a bright screen.

Cost:  (TBD) depending on model type and shipping location.

What do you think? Will you be picking up the Cinemartin Loyal LT S4K? Comment below!