The US-based company Core SWX has been offering powering solutions for filmmaking gear for years. They sell various battery packs, battery plates, chargers, and so on. They recently announced the new NEO 150 Mini battery packs and the GP-X2 Mini chargers. As part of the cinema5D Virtual Show, Nino talked about these new products with Zac Shannon from Core SWX. 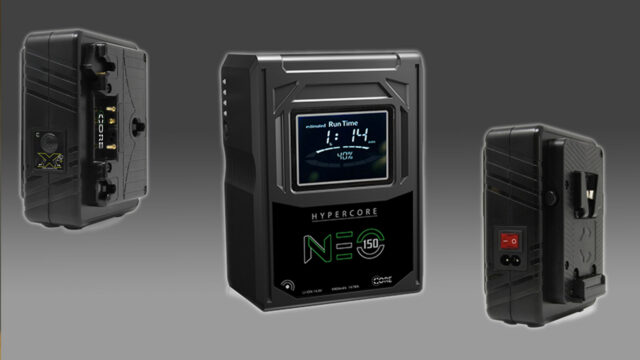 The new Core SWX NEO 150 Mini lithium-ion battery packs offer 147Wh (9.9Ah) capacity (14.8v). They are capable of 16A peak load and 12A continuous load which should be enough to power any cinema camera. According to Core SWX, normal Runtime with 25W draw is around 5.9 hours per battery pack. They come in both V-Mount and 3-Stud (Gold Mount) versions.

As Zac told us, the mini form factor of these battery packs is beneficial for use with cinema cameras. The weight of each pack is 1.8 lbs and the size is 3.54” x 4.65” x 2.38”. They have a high-resolution LCD display for useful information like remaining runtime, remaining charging time, etc. 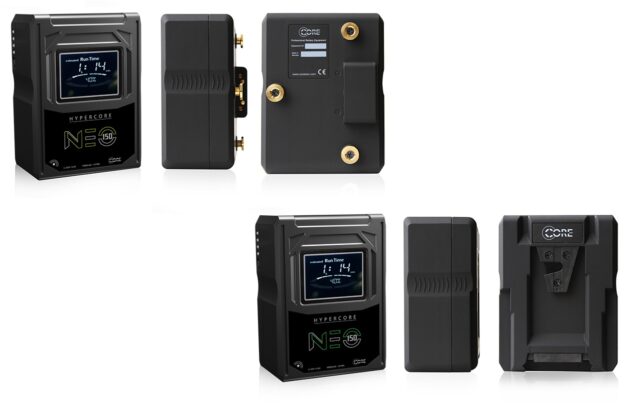 The NEO 150 Mini packs can communicate with cameras and chargers with both one-wire and two-wire protocols. The hibernate/sleep mode is activated after 48 hours of no movement or battery usage. There is a smart 12VDC p-tap as well as a 5V USB port integrated with the battery.

Through the RFID functionality, users can now check the battery pack’s health and status via smartphone with any NFC reader app (both iOS and Android).

When it comes to the warranty for these battery packs, Core SWX offers 2.000 cycles plus two years warranty (whichever comes first). According to Zac, these are the best conditions offered in the industry.

This dual-channel charger is basically the smaller version of the Core SWX GP-X2 charger. It can charge two battery packs simultaneously. When charging two packs, the charger outputs 1.5A per channel. As an example, with one battery mounted it charges 3A, which can charge one 98wh pack in under 2.5hrs.

The size is very compact at 4.5″ x 5.5.” x 3″ and it weighs only 1 lb. The charger comes in both V-Mount and 3-Stud (Gold Mount) version. Trickle charge maintenance program ensures the batteries are always at maximum capacity.

The Core SWX NEO 150 Mini battery packs are already available and shipping for around $485 per piece. The GP-X2 Mini chargers are available as well for around $250.

Do you use Core SWX battery packs? How do you like them? What do you think of the new NEO 150 Mini and GP-X2 Mini chargers? Let us know in the comment section underneath the article.