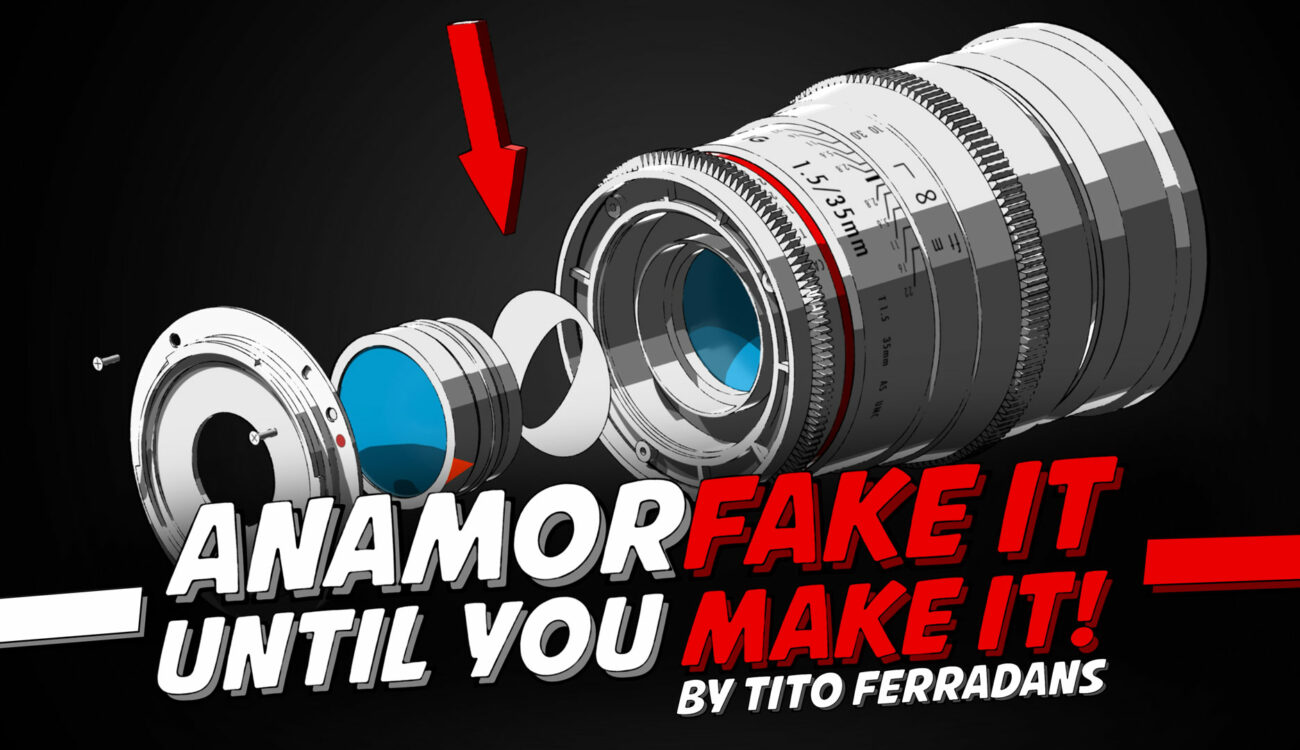 This is a guest post by Tito Ferradans, a filmmaker from Brazil who’s based in Vancouver. He is a tech guy, passionate for sci-fi narratives and he runs a Youtube channel about anamorphic lenses. This time, Tito wrote for us about how to “anamorfake” the fairly affordable Rokinon/Samyang 35mm T1.5 Cine Lens.

So you want to achieve the anamorphic look or make your footage more “cinematic”, but you’re not ready or you don’t have enough time to figure out anamorphic adapters. You also don’t have enough money for cine anamorphics (who has it?). Lucky for you, I spent the last three years breaking down what makes the anamorphic look into components that can be created separately without any anamorphic glass. That’s my Anamorfake It Until You Make It! guide. More about it later! If you wanna rush in make sure to use the code C5D for 10% off at checkout! 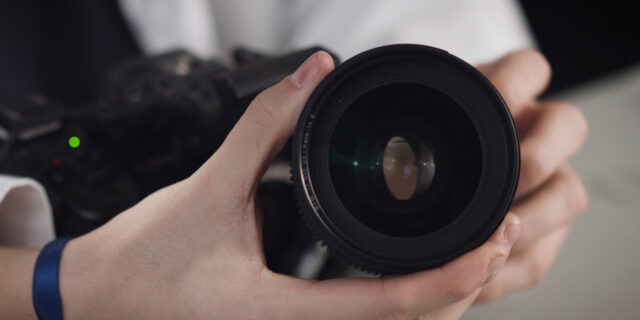 In this tutorial, we’ll be modifying the popular Rokinon 35mm T1.5 Cine version. This 35mm is a very versatile lens. It has great minimum focus and features a fast aperture which boosts bokeh for the smart shooter. 35mm is a mandatory focal length in any set, acting like a normal lens on S35 cameras and a mild wide-angle on full-frame. The one I’m using is in EF mount as it’s the most versatile budget mount on the market. In the following steps, we’ll open up the lens, take out some elements and add an oval insert to the aperture mechanism.

Modifying a lens can feel like a daunting experience if you have never done it before. I still get shivers every time I’m opening a new lens. The secret to staying cool and safe is to take notes and film/photograph the process, paying close attention to what piece goes where, as well as its orientation. The mod we’re attempting today is a simple one.

In this video, you can see me doing it all in just over ten minutes. I usually don’t share these in writing anymore, but I teamed up with cinema5D to provide you with an illustrated guide here so you can do the process at your own pace!

For this mod, we’re gonna need the lens (obviously), a lens wrench (not mandatory), scissors, a Phillips screwdriver (#000), marking tape, a permanent black marker, and oval inserts you can get from me on eBay.

Before I even touch the lens I paint the oval insert black. The ovals come in thin transparent acrylic. Use the permanent marker for that. Paint both sides of the disc and do two coats. Set it aside.

Now get the lens and notice how the locking pin on the mount aligns with the line for the aperture mark. That is important for reassembling the lens later. Get the screwdriver and remove the three screws that hold the mount in place, putting them on a safe place. 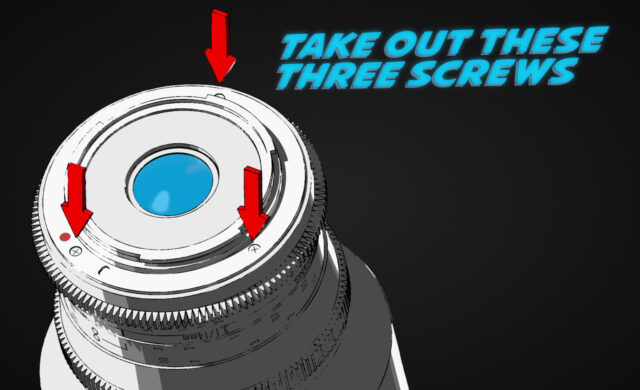 Then take out the lens mount and set it aside too. 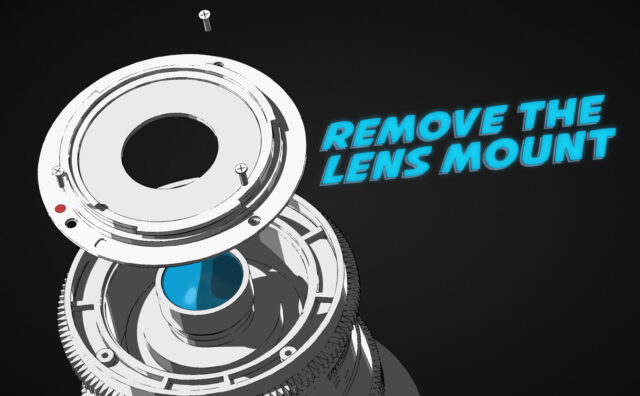 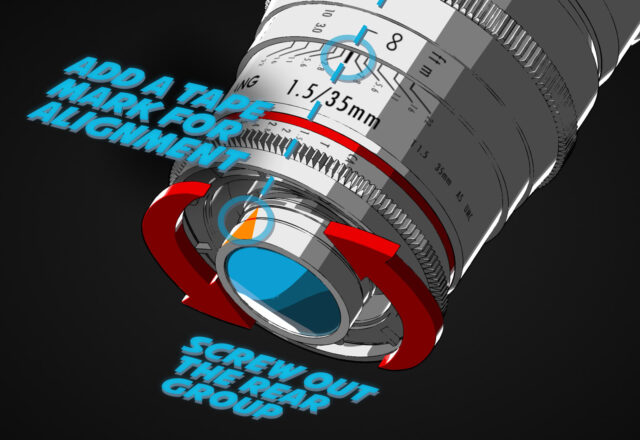 You’ll notice two little grooves on the housing around the glass. You can use the lens wrench here to loosen the initial tension. If you don’t feel like getting a lens wrench just for this one mod, get a firm grip around the rear group (rubber gloves help) hands and twist it out. There’s a lot of turns on this one.

This gives you access to the aperture mechanism. You can open and close it, see how it works up close. You’ll also see that there’s not a lot of room in there for our oval insert. We’re going to have to attach it to the rear group itself.

Use the triangle mark to align the oval insert. Considering its narrowest diameter, the oval must be perpendicular to the triangle. This ensures that when you screw it back into the lens, the oval will be in the proper orientation – I learned this the hard way. The cheap option to stick the disc in place is using little loops of tape. The fancy way of doing it is using double-sided tape. Make sure you stick the tape to the metal housing around the element, not to the glass itself! 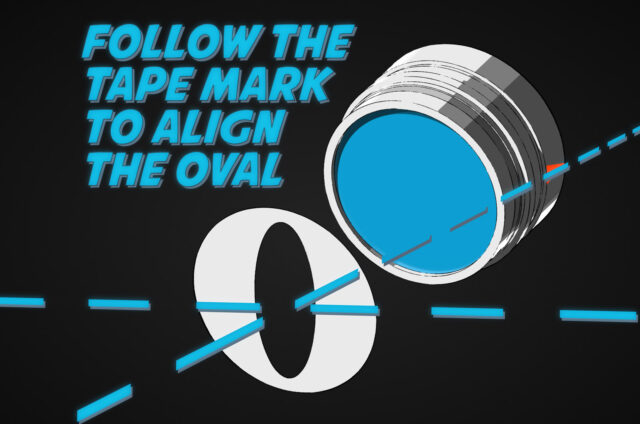 All that is left to do is screw this little guy back in place and reinstall the mount. Be prepared, though: there is a good chance that the oval will not be perfectly aligned. Here’s trick I learned after doing a dozen of these mods and adjusting the ovals to perfection: reinstall the lens mount using only one screw.

Make sure the notch in the mount is aligned with the aperture line as we observed early on, and install the screw closest to that point.

Then mount the lens on your camera and check how the ovals are looking. For me, they were a bit off to the left. To fix that I need to reopen the lens, get to the oval again, and twist it a little bit in the opposite direction. 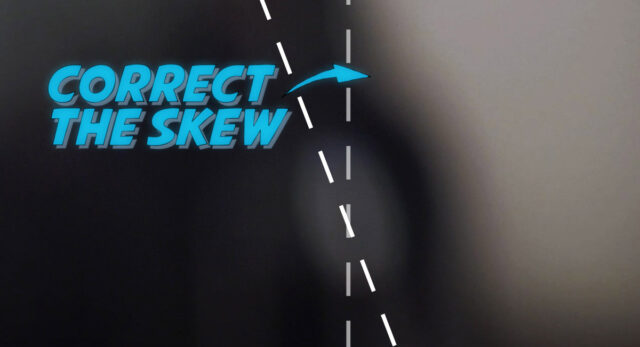 This is the only challenging part of this mod. Sometimes it takes me up to three tries until I get it perfect. Take your time, think it through and make the adjustments.

Once you are happy with the alignment, install the rest of the screws, locking the mount in its original position! 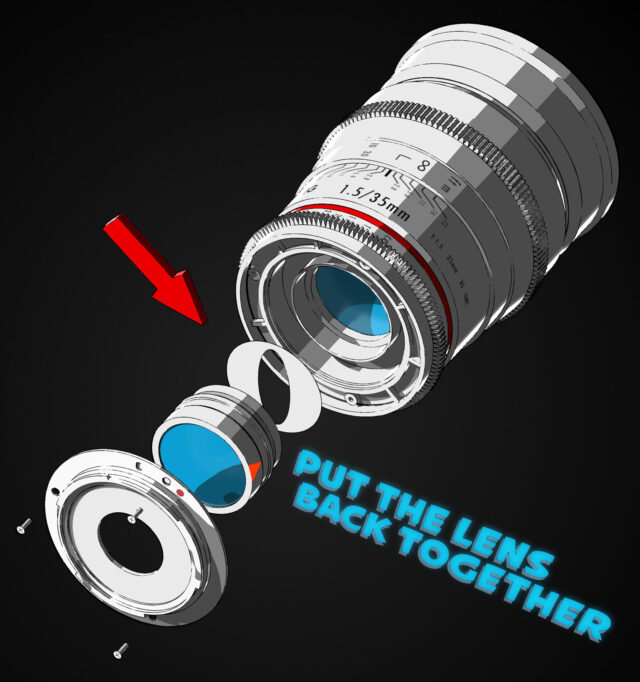 This concludes the modding process for the Rokinon 35mm. Go out and shoot some good-looking oval bokeh! Notice that the aperture mechanism still works perfectly, allowing you to stop down the lens. The downside of doing so is that the oval shape will start to get cut off until it disappears completely. After installing one of these mods, I also throw a variable ND on the lens and use that to control exposure, instead of the aperture ring.

In terms of crafting the anamorphic look, this mod won’t make your lens squeeze the footage or produce streak flares. This is the cleanest style of modification. The Anamorfake It! guide includes several other aspects of creating an anamorphic look with distortion, lens flares, detailed instructions for modifying over fifteen lenses, how to make your own mods plus video tutorials and a ton of resource material that you can use in your projects. This is all without actually changing the way you shoot – if you ever used adapters, you know they require a lot of compromises. To inspire you a little more, use the code C5D at checkout for a 10% discount!

What did you think of Tito’s guide to anamorfake your lens? Or do you prefer actual anamorphic lens shooting, now that they’re getting more affordable? Let us know in the comments below! 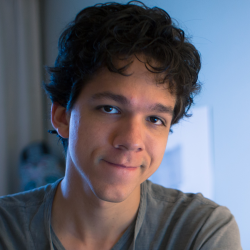 Tito Ferradans spent the last six years researching, writing and making videos about the anamorphic format and how to achieve it without breaking the bank on low-budget productions. He's obsessed with the technical aspects of his projects and how each piece of glass in front of the sensor will affect the final look.