In episode 25 of ON THE COUCH, I was happy to welcome filmmaker O’Connor Hartnett and Mark-André Voss from F&V Lighting.

In this second part of this episode, O’Connor talked about his first larger shoot on which he was able to exclusively shoot on LED lights. He talked about the advantage to have dimmable tungsten lights in form of LEDs, and how to combine them using several of F&V’s Z180 lights, which can be attached to each other and then dimmed and controlled together at the same time, using only the dimmer button of one light.

He mentioned a narrative project using the 2×1 lights, throwing them through a 4×4 silk and lighting an entire room with it. He is looking forward to using exclusively LED lights in the future at some point.

There are flicker issues with HMI’s, even the “deflickered” ones, but there are no such issues with LEDs, so these lights are great for high frame rate shooting. 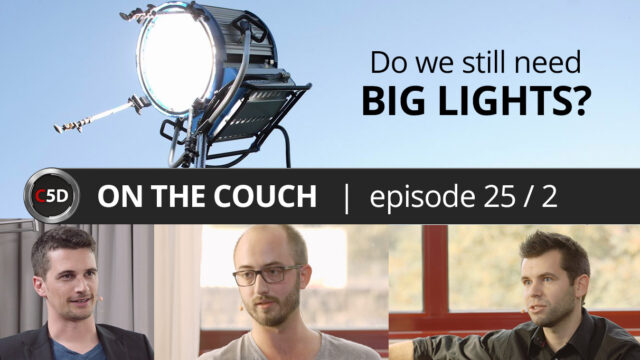 Mark added that lights really become tools to shape the look, but not to illuminate the scene any more as cameras get more and more light sensitive. I added that cinematography might be more and more about reducing the existing light in the future – and to work with shadows. In the past, the original lights at a location needed to be replaced with stronger counterparts to recreate that mood in a film camera, which was cumbersome and difficult work. Nowadays it’s easier to capture what’s already there – however cameras are already almost too light sensitive for many places.

In the 3rd and final part we talk about F&V’s Spectra HD4 EVF and where the camera accessory industry is heading in general.