The Canon EOS 7D mkII was announced a week ago. For a long time the old Canon 7D was one of the best video shooting DSLR’s. Now the new addition to the Canon DSLR family offers many improvements in video mode. At cinema5D we took the camera into the field and tested it thoroughly to give you an impression of what it offers

Note: This review and footage were shot on a beta camera. There may be improvements in the final production version of the camera.

I got into a nostalgic mood when I sat down to write this article, as the original Canon 7D served me very well despite its limitations. Be it a BBC news pieces or a National Geographic Video, that camera was truly a working horse for me.

5 years to the date, and its successor landed on our desk raising modest expectations when it comes to the video side, as this camera according to its specifications isn’t offering all the features we would wish for and that other large sensor cameras already offer.

Watching Canon’s 7D mkII promotional video led us to believe that an extensive amount of sharpening was used in post and indeed our own findings support the assumption that the 7D mark II footage is a bit soft. We can tell you the video quality of the Canon 7D mark II is comparable to that of the Canon 5D mark III. Soft but very clean. In the above video, 25% sharpening was used in post in order to make the clean picture “alive”. 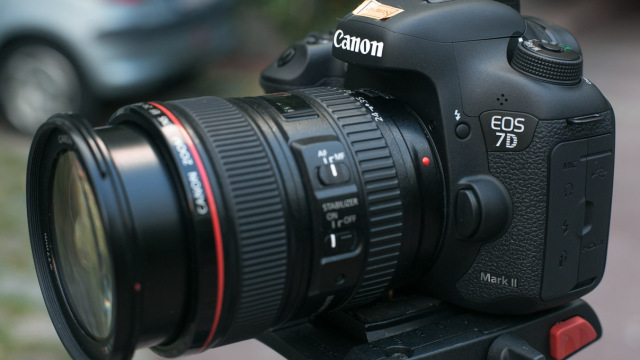 Besides the nice looking clean video mode it seems that Canon for the first time added audio output via HDMI. For a long time this feature was requested by professionals who worked with Canon DSLR’s on news assignments or when using external recorders.

Another enhancement from the original model is the headphone jack. Now it is possible to monitor your audio while recording video, but mind you that on this “beta camera” the preamps were rather noisy. Also audio and video were not in perfect sync as you can see in the video. Probably this issue will be resolved in the production version.

Other than that the added full HD in 50p and 60p mode is a very nice addition, but limited to IBP compression only. Normal video is recorded in ALL-i coding like on the 5D mark III. Other “basic video features” like peaking or magnifying video while recording did not make it into this camera.

Another noticable improvement is the brighter and larger LCD screen, dedicated video overlays, better lowlight capabilities, Dual-Pixel CMOS AF (as on 70D) and the ability to use both CF and SD cards.

All in all the Canon 7D mark II offers surprisingly nice looking and clean video with lovely and accurate colors and no aliasing or moiré. We will go into detail in our upcoming lab test where we will compare sharpness, colors, dynamic range and lowlight to other cameras including the old 7D.

One or two years ago this camera would probably have sold like hot cakes. 5D mark III video in a much more affordable APS-C body and slow motion in full HD. But now that 4K is here for many the video might be too soft.

Many thanks to Sonja Völker from herzilein-wien.at

Music by themusicbed.com
The Light the Heat – Autumn Eyes