Final Cut Pro X update 10.3 has been announced. It is the latest version of Apple’s professional video editing software. Here’s a hands-on review of its new features! 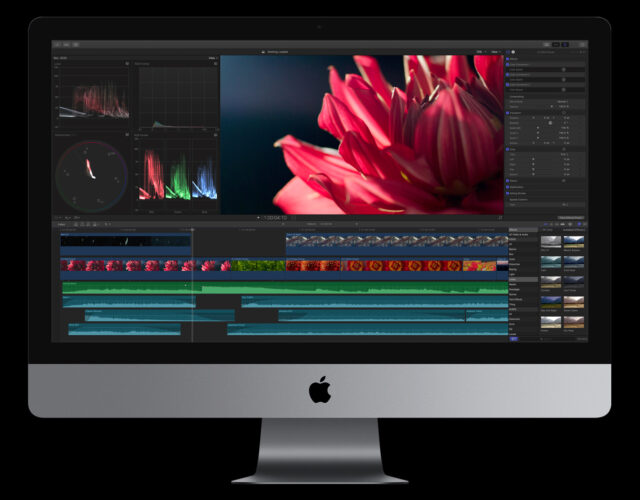 Yesterday, Apple announced a long awaited Final Cut Pro X update, bringing a slew of new features and changes to their professional video editing software. Back in the summer, I was fortunate enough to be allowed a sneak peek at 10.3 and, ever since, have been eager to discuss what is a major step forward for this often maligned, but increasingly popular, software.

Before I delve in to these new features let me just say that, yes, Apple completely screwed up the release of FCP X back in 2011 and, yes, I’m not surprised that a lot of people moved to the more familiar embrace of Premiere after that debacle.

However, FCP X today is unrecognisable compared to five years ago and, whether you realise it or not, it has had a massive impact on our industry. Even Premiere and Resolve have borrowed a significant quantity of FCP X’s features and design cues, which has benefitted us all. So, what’s new in Final Cut Pro 10.3… 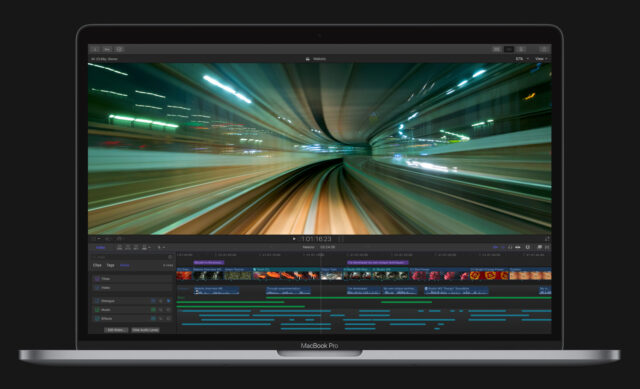 First off, you’ll notice an immediate difference when you open 10.3, as the interface has had its biggest overhaul since X first appeared in the summer of 2011. Like most of Apple’s UI changes in recent years, it is now cleaner and flatter, and I love it!

I’ve never understood this notion that professional software has to look clunky and riddled with tiny buttons. As a professional, I want to work quickly and with minimal distractions, and the new interface gives me just that. iMovie Pro (an oft used, if misguided nick-name) it ain’t!

By far and away the biggest area that has been updated with this release, is the way in which you edit audio in FCP X. Whilst for a long time it has been a bit of a myth that FCP X wasn’t up to “professional” use, it is certainly fair to say that, for broadcast editors, the audio tool set in FCP X fell just short of their requirements, with 3rd party plugins having to pick up the slack in most cases.

Roles metadata has always hinted at being an exceedingly clever way of manipulating and organising audio, but at long last those hints have become fully formed in 10.3.

Whereas in traditional track-based NLEs an editor would have to carefully place dialogue, effects and music on specific tracks whilst building their edit, FCP X frees them up to not worry about where each type of audio clip is being placed in the timeline, and instead allow roles metadata to sort it for them. 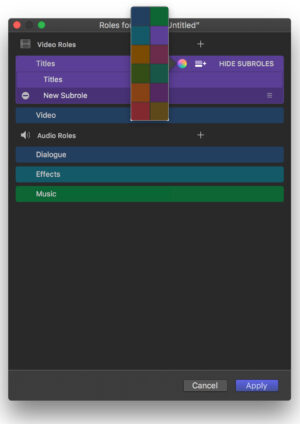 Now, with one click, an editor can have FCP X find all of their dialogue clips (or any other type of role) and rearrange them on the timeline instantly.

In previous versions of FCP X, you could use Roles metadata to highlight or collapse clips on the Timeline, but 10.3 goes much further. It will pull all your selected clips into “lanes” on the timeline, so you can mix them, apply effects or compound them to create submixes and make master audio adjustments.

This essentially gives us a hybrid track/trackless timeline for the first time.

Types of clip are also now much more easy to spot on the timeline, thanks to colour coding that can be either automatically or manually assigned to Roles. Lastly, Final Cut Pro now exports MXF wrapped Pro Res files using audio roles to create broadcast-standard audio channel layouts.

In fact, at the other end of things, FCP X now supports iXML (an open format that allows a sound engineer to tag metadata on broadcast WAV files) for assigning roles during ingest, which will speed up this type of work massively. 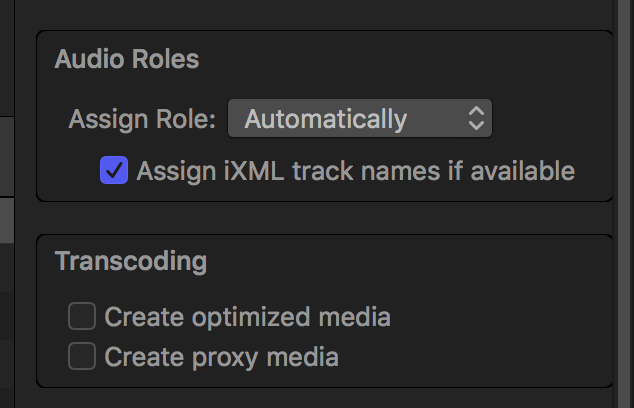 Only time will tell how useful the Touch Bar will be on the new MacBook Pros, but its integration with Final Cut Pro 10.3 looks very promising. It is context-sensitive and will dynamically switch between a Timeline Overview mode, Trimming mode and Audio Controls mode, giving you access to quick navigational and editing functionality that has never been possible before.

As if Apple’s intentions with this update weren’t clear enough, their inclusion of Rec. 709 and Rec. 2020 luma and/or chroma range-checking tools illustrate exactly who Apple are targeting this update at.

You can now turn clipping overlays on whilst grading your projects, making it a whole lot quicker to check your edits before broadcast.

I know a lot of BBC news editors who will love this, as it means they can deliver edits that don’t have to spend as long being onlined by someone else before TX. 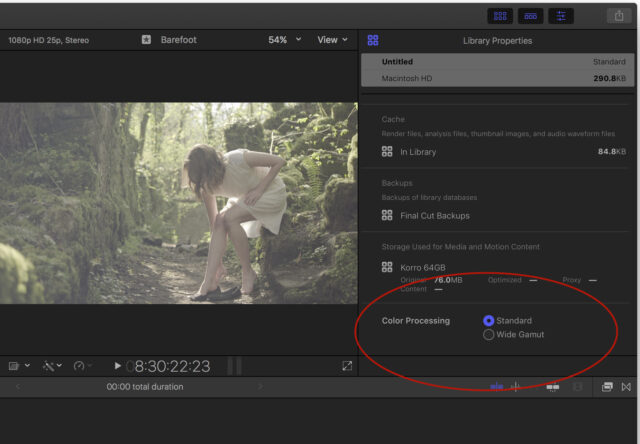 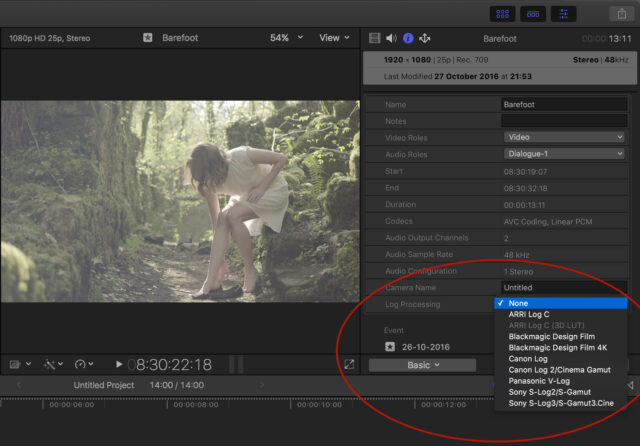 I have never been a big customiser of window layouts and, actually, find the dizzying amount of options for this in Premiere (14 default windows/tabs can be moved to 30 different positions!) a touch silly.

However, I do like to have a few presets for editing, audio mixing and colour grading, as well as multiple monitor arrangements.

So it is nice to see that user selectable Workspaces are back in 10.3 and can be loaded to any edit suite you happen to find yourself at. 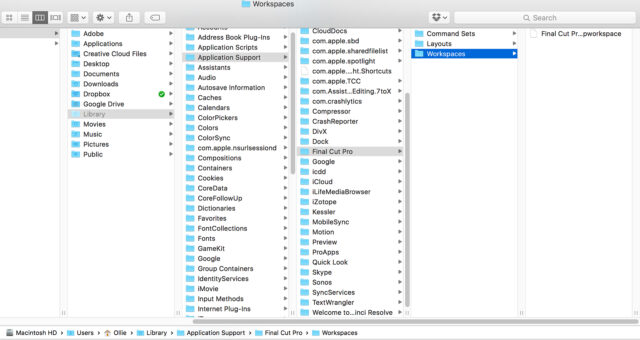 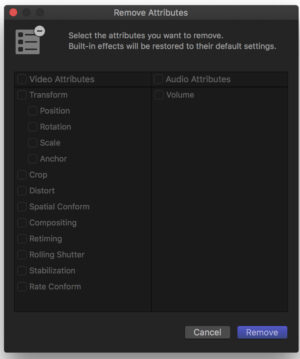 There are tons of new bits and pieces in 10.3 that will keep users playing for hours, but there are also some old features that disappeared and have finally made their way back!

Remove Attributes is back. Copying and pasting timecode into the dashboard is back.

Also – and I know a lot of editors who will be most thrilled about this – source timecode can be shown in the Viewer again! In fact, it can now be burned in to your exports, giving FCP X a great new dailies workflow. 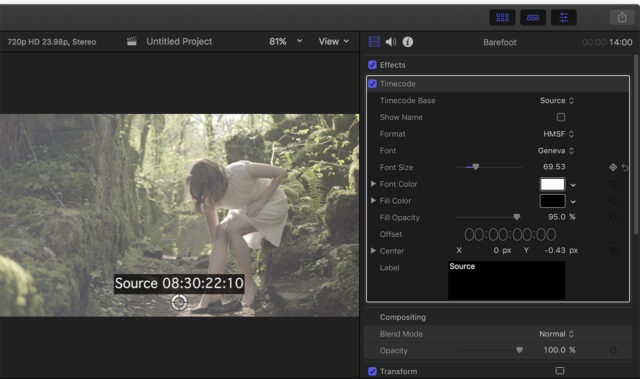 In A World Of Subscriptions…

Finally, not that this is exactly a feature, but this is yet another free upgrade for FCP X.

I bought FCP X for £200 back in 2011 and have paid not a penny since, so it has cost me exactly £3.17 per month to use it, and that figure will just keep on decreasing in the coming months and years.

If you’re a Premiere user reading this, there’s absolutely no suggestion by me or anyone else that you should immediately jump ship to FCP X.

Quite frankly, if you like working with a track based timeline and don’t have time to re-learn the fundamentals of your NLE, then you’re never going to move. But, for those of us who see that trackless timelines and deep, metadata-driven, workflows are the future of non-linear editing, Final Cut Pro X Update 10.3 is a big step along this road.

Final Cut Pro X update 10.3 (as well as Motion 5.3 and Compressor 4.3) is available through the Mac App Store now.