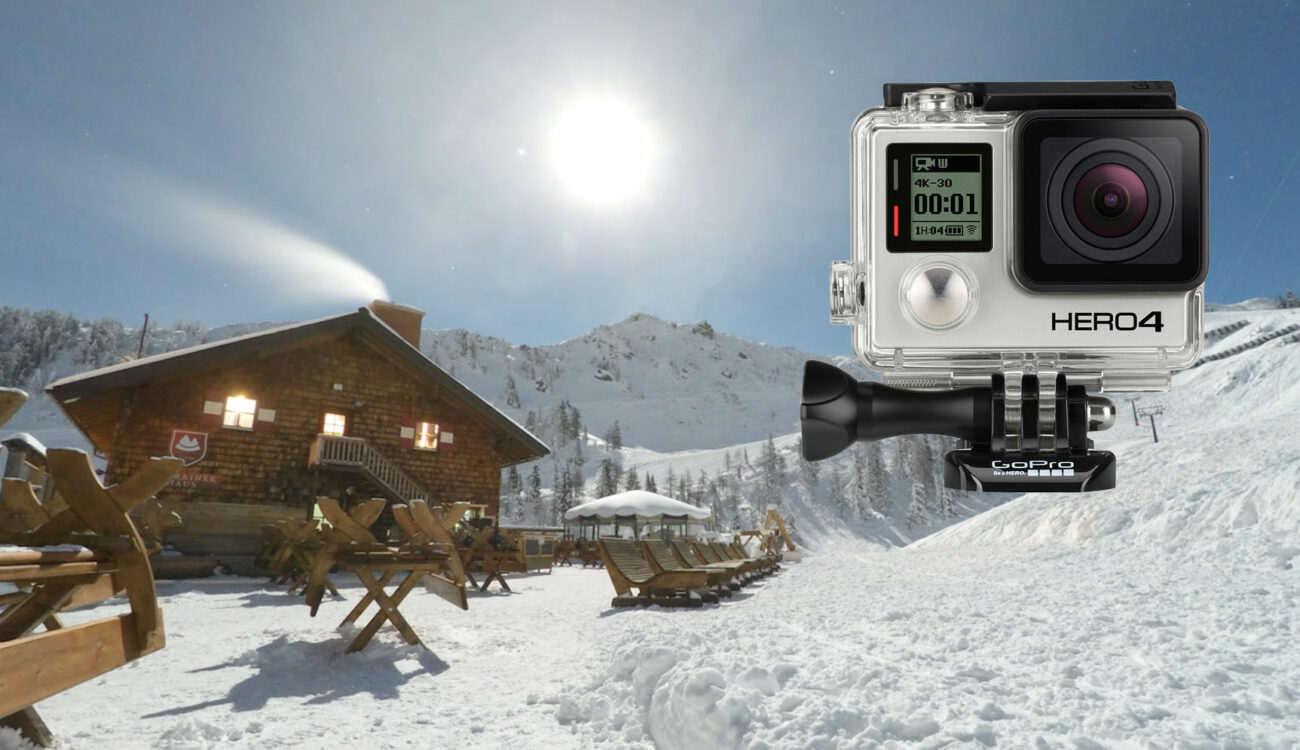 Gunther Machu works for a large engineering corporation and travels the world for business. On his trips, he has started shooting video for pleasure with amazing results that have brought him a lot of fans on his Vimeo account, not only from enthusiast filmmakers but also from professionals. He always uses the smallest kit possible – the Panasonic GH2 and the Blackmagic Pocket Cinema Camera are usually his main work horses. In this guest post, he shares his experiences with the GoPro Hero4 which he tested on his ski vacation last week, using the newly announced firmware update for higher slow motion capabilities (report here). (nl)

When I bought my first GoPro Hero 3 black edition in February 2013, I was quite fascinated how capable such a small camera can be. Using the right video modes (e.g. 2.7K 24p, 1080p60 or 720p120 in narrow mode) it delivered moiré and aliasing free, high bitrate images. Especially the Protune mode provided a flat color profile which can be tweaked quite heavily without falling apart.

Hence, I was not too excited when the GoPro 3+ came to the market. It had too little to offer vs. the Hero 3. This changed with the announcement of the GoPro Hero 4 about a year ago. What really pushed me over the fence was the announcement of a firmware update to be released in February 2015 which included new video modes like 2.7K 60p or 720p240!

Hence, I bought a Hero 4 Black Edition one week ago for my ski vacation, hoping for the release of the latest firmware just in time. 2.7K p60 should be super useful to apply optical correction in post for the fisheye lens (e.g. with the GoPro Studio software or Adobe After Effects (in the effects tab use ‘distort’ à ‘optical compensation’ then tick ‘reverse lens correction’ and FOV values of about 70). Also, additional image stabilization in post (like warp stabilizer in Premiere Pro) further zooms into the image hence any resolution overhead is highly welcome!

Well, what I found is the above statement only holds true for certain modes:

Pah, not for me – squeezed and distorted à looks like wrong aspect ratio 80’s TV Whoa, everything changes with the “medium” field of view. This is where the 2.7K modes shine and really provide the extra resolution they are promising. Also, the bitrate of ~65mbits/s seems enough even when a lot of motion is present in the images – no compression artifacts are visible to my eyes. “Medium” FOV for 2.7K means obviously 1:1 sensor subsampling – clean, moiré and aliasing free images which are much more detailed than the 1080p modes!

“Medium” field of view for 2.7K is less wide than “medium” for 1080p which makes a 1:1 comparison between these two modes impossible, but here are 140% zoomed in frame grabs from a 1080 timeline for both resolutions (click to enlarge): The new GoPro Hero 4 Black Edition with the latest firmware 2.0 is an amazing upgrade from the Hero 3 black I bought 2 years ago. I will only use those modes on the Hero 4:

This video I shot partly with the old, partly with the new firmware (it arrived in the middle of my ski vacation), using mostly 2.7K and 1080p120 in Protune flat and sharpness dialed down as far as possible in cam. One advantage of the high (automatic) shutter speeds having zero motion blur in direct sunlight is that you can further slow down the shots with optical flow algorithms (available e.g. in the GoPro Studio software, or After Effects (timewarp) or Twixtor). I used this effect a few times in the test video. As mentioned above I only learned after the fact that the “wide” 2.7K shots do not provide any advantage over the 1080p modes – hence the action shots appear soft.

Lesson learned, you should always test before you shoot!

Also, I really liked the “Night Timelapse” functionality of the Hero 4 – you can set the shutter & the interval (in my case 20s shutter and 30s interval). The battery of my Hero 4 survived more than 1,5 hours at -10°C for the night timelapse shown at the end, which I find quite amazing! Also, no need to worry if it starts to snow or rain during the timelapse – the camera sits safely in its waterproof housing. Most of the shots were de-fisheyed with After Effects, and image stabilized with warp stabilizer. Vimeo does not take 50p clips, that’s why I rendered everything in 25p – believe me, in 50p the action looks way better!