A Drone Launch Pad? When we saw this on the NAB 2017 show floor, we just had to cover it. What an interesting, awkward and still potentially useful product idea. For most of us, this might seem like unnecessary bulk for your drone shoot, but Bob Schmidt from Hoodman thinks otherwise. Let him run you through the benefits of the Hoodman HDLP.

The idea of a glowing drone launch pad may seem funny at first, but after hearing about what the Hoodman HDLP can do for drone shooters, I’m not so sure that my initial reaction is fully justified anymore. I’ve done a lot of drone shoots (see my Master Drone Footage Tutorial Series Here) and I remember several situations when the grass was too high too take off and it needed to be cut in order to establish an acceptable home point.

Concerning dust, I’ve had lenses get dirty too, which could be due to a dusty takeoff site, though I can’t be sure. The red and contrasty design on this drone launch pad might help finding my home point on the sunlit screen of my drone remote, and its glowing ring could be helpful when planning to fly at night. 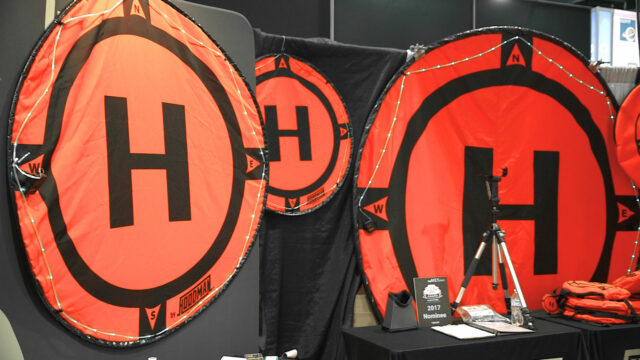 The Hoodman HDLP might not be what one would call a must-have for your drone shoot, but it could certainly help make some aspects of your professional shoot more professional. The design is not as trendy as could be, but there is certainly a practical idea behind it.

The Hoodman HDLP is available now. The price of $60 for the small one seems OK, but $400 for the large pad seems like a bit of a stretch. Bear in mind: the glowing ring is an optional add-on.

Here’s a tutorial video that lets you see the Hoodman HDLP Drone Launch Pad in action:

What do you think? Best idea ever? Or do you have a better way to spend $60? Let us know in the comments!