Insta360 just announced new modular camera system. The Insta360 ONE R offers interchangeable lens design with three available lens mods – the Dual-Lens 360 Mod, the 4K Wide-Angle Mod and the 5.3K 1-Inch Wide Angle Mod, which was co-engineered with Leica. All the mods support Insta360’s FlowState stabilization along with many more new features. The camera is available for purchase now. 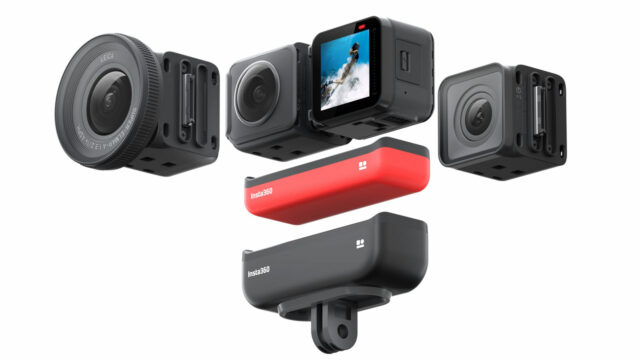 Insta360 is a Chinese camera manufacturer with a lot of know-how in the world of 360 VR video. They offer a wide array of products aimed at various segments of the market. Today, they announced a new camera, which I think might be their most innovative product yet. Let’s take a closer look at the Insta360 ONE R features and specifications. 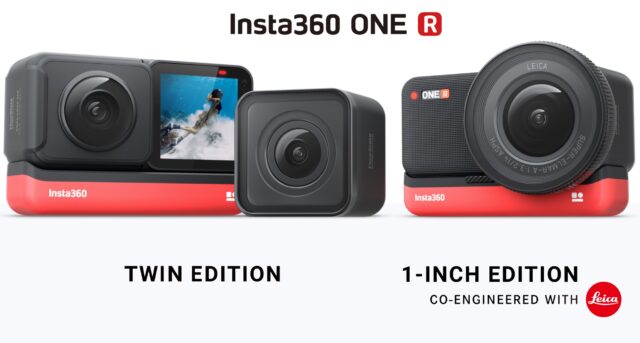 The concept of the Insta360 ONE R is quite simple. It has a battery base module, a processor module with a touchscreen display, and a lens module. Currently, the Insta360 ONE R offers three ways to shoot with three available lens Mods — the Dual-Lens 360 Mod, the 4K Wide-Angle Mod and the (separately sold) 5.3K 1-Inch Wide Angle Mod, which was co-engineered with Leica.

Pure 360 cameras, like for example the Insta360 ONE X, offer the flexibility of “shoot first, point later” workflow which captures all the action around the camera and lets the user pick the angle later. This approach, however, does not provide sufficient image quality for reframed shots. When the action is concentrated in one direction, a classic wide-angle action camera delivers better results. That’s why Insta360 ONE R now gives users the ability to choose the right tool for each situation.

This Mod supports 5.7K capture on two lenses that cover every direction at once. We know this set of features from the ONE X. What is new, is the real-time 360-degree preview on ONE R’s touchscreen module. 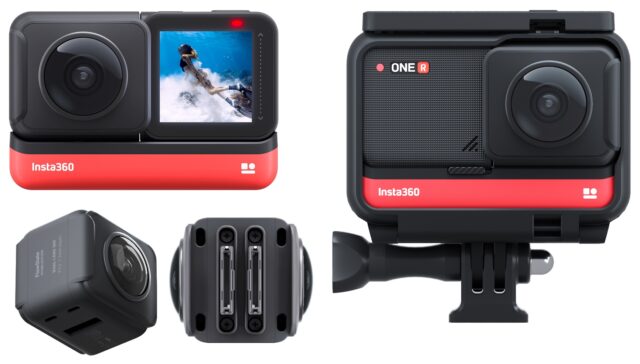 To help with choosing the right angle from a 360 footage, Insta360 developed Auto Frame. It is an algorithm which analyzes 360 footage and automatically chooses the best parts (best angles) of any 360 video and recommends them to its users. There’s still plenty of choices, but the ONE R app’s Auto Frame feature helps users quickly narrow down the shots worth considering and it does the reframing for them.

Another helpful AI-powered feature is the tracking capability of the ONE R. When editing 360 videos, users can simply select a subject to follow with a tap. The ONE R app will automatically keep it locked in center-frame. Even if a subject is obscured by an obstacle, ONE R’s algorithm will remember it and start tracking again as soon as it reappears.

There is also a real-time Deep Track available. ONE R’s “Point to Track” feature lets users lock onto a subject with the voice prompt “Mark that!”. The next time the camera connects to the app, it offers an automatically reframed shot that follows the chosen subject.

Insta360 ONE R (when equipped with Dual-Lens 360 Mod) also has the Invisible Selfie Stick feature known from the ONE X. 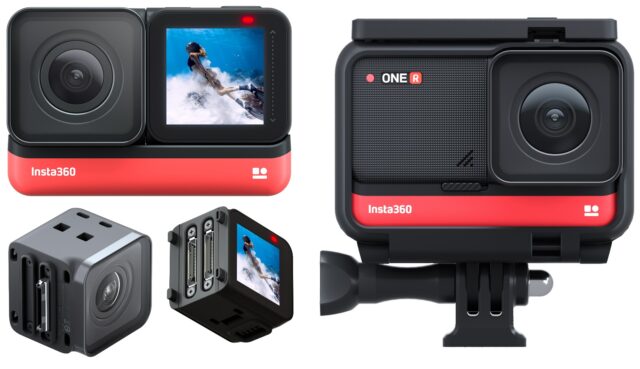 4K Wide Angle Mod is the standard action cam setup. It can capture 4K video at up to 60fps with the f/2.8 aperture 16.4mm (full-frame equivalent) focal length lens. It supports FlowState stabilization and offers up to 8x slow mo in Full HD. Its reversible design lets users quickly flip the touchscreen from back to front, which could be useful for vlogging. 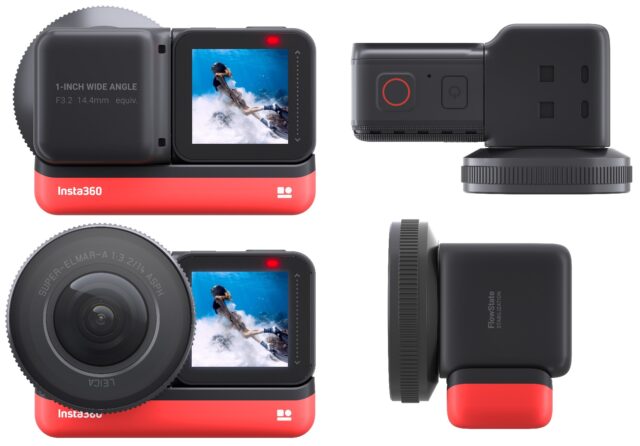 This new 1-Inch Wide Angle Mod is perhaps one of the most interesting mods for me. If I am not mistaken, it is the largest sensor ever included in an action camera (I don’t count Sony RX0 as an action camera). It can capture up to 5.3K 30fps video and 19MP photos. Thanks to the larger sensor it should produce better results in low light and generally in complex lighting conditions.

The f/3.2 lens with 14.4mm (full-frame equivalent) focal length has been designed by Leica. I think they opted for a rather slower lens to keep a larger area in focus, because an action camera has fixed focus and a larger sensor might become a problem here. We are really curious to see the image quality from this mod. (Unfortunately, this is the mod we did not receive for testing yet.) 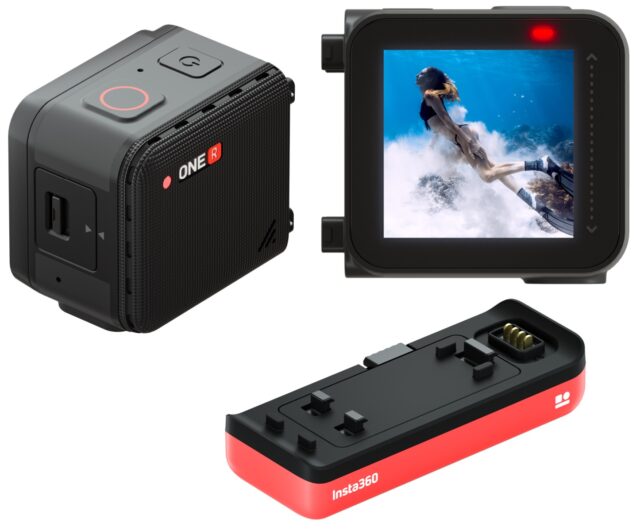 Speaking of low light, as Insta360 claims, ONE R offers a range of both hardware and software upgrades to achieve very good image quality in low light environments. There is a new Night Shot mode for low-light photos and automatic de-noising in low-light video. Insta360 ONE R also supports HDR modes for both photos and video, or Color Plus for automatic, brighter, more vibrant hues.

One of the most important factors of an action camera is how rugged it is and how it deals with water and dust. The good news is, that the ONE R is IPX8 certified – it is waterproof to depths of 5 meters (16.4 feet) straight out of the box. For deeper use, Insta360 offers an optional Dive Case which enables descents of up to 60 meters (197 feet) – only for the 4K Ultra Wide Mod.

Every ONE R build comes standard with two onboard mics and an automatic wind-reduction algorithm. Its USB Type-C port and top-mounted accessory shoe also allow for third-party 3.5mm mic connection.

Like some of their previous models, Insta360 ONE R supports simple voice commands. New Starlapse mode automatically calibrates exposure settings to capture time-lapses of the night sky. The Bullet Time effect has also been upgraded with a smart horizon-leveling algorithm.

The ONE R app comes with a range of new editing features designed to take advantage of all the capabilities of the new camera. The TimeShift hyperlapse effect popularized by ONE X can now be completed with a couple of taps. A new pose-detection algorithm lets users instantly identify and extract every frame of a clip in which they strike a similar posture which can be useful for creating a stop-motion sequence.

FlashCut is the ONE R app’s content-aware editing algorithm. First, it finds shots based on a theme set by the user (like food, travel or pets). Then it automatically combines them with music into an edit. FlashCut can filter and combine footage captured by any ONE R build — 360 or standard. I see a similarity here with GoPro’s QuikStory feature. 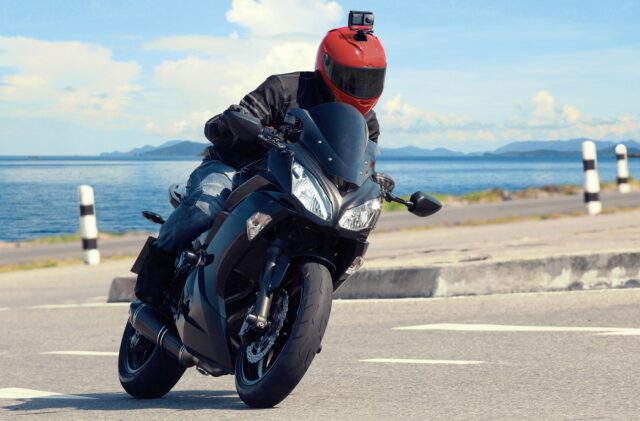 Insta360 ONE R is available now for purchase. Customers can buy parts of this modular camera system separately or choose one of Insta360 ONE R sets. The offer the following packages:

Music courtesy of MusicVine.com – Get 25% off any Pay-Per-Use license with code C5D25 (valid for one use per customer)

What do you think about the new Insta360 ONE R camera? Do you think such modularity is the right way in this market segment? Let us know in the comments below the article.