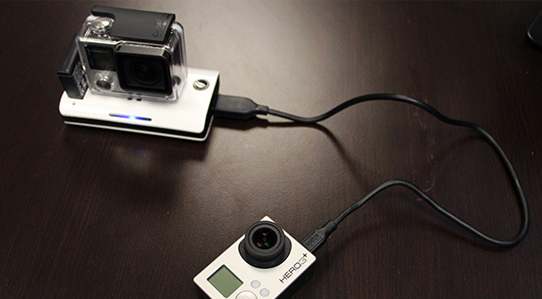 Here’s a Kickstarter campaign that I can see having no problems fulfilling its goal. The MOTA Wireless Charger is a docking station for the Hero 3 and 4 that also charges an additional GoPro battery as well as phones and accessories via USB ports.

The neat design of the MOTA Wireless Charger allows you to charge your GoPro by simply docking it in the device. The wireless pad taps into the USB port on your GoPro, and sits between the camera and its casing.

This is great for use in the field, saving hassle by alleviating the need to remove the casing to charge your GoPro. The MOTA also offers a dock for an additional GoPro battery and adds further charge support via USB and micro USB for your phone, GoPro BacPac or other USB accessories.

The MOTA wireless charge is lightweight, has a capacity of 6000 mAh and has LED status lights to keep an eye on your charge levels. Their goal is a timid $15,000, with over 20 days to go and half the funds already confirmed, I can’t see this having any problems becoming a successful project.

Limited Early Bird packages are still available, which will get you a MOTA Wireless Charger for $55. More info can be found on the Kickstarter page.