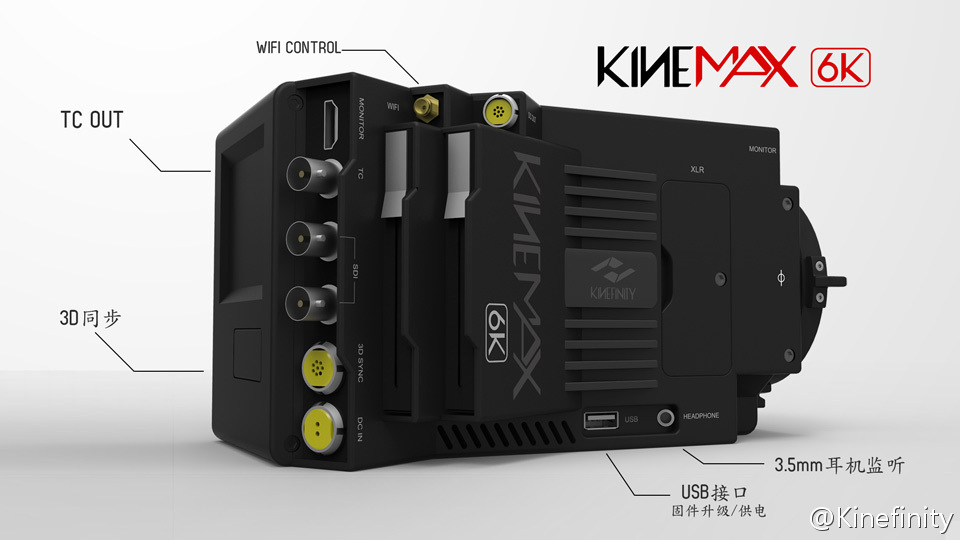 In an online press-conference Chinese camera manufacturer Kinefinity just presented a new 4K and as well a 6K camera.

Unfortunately the entire presentation was held in Mandarin and since most of the details were embedded within .jpg files we only have very limited technical information. The things we could decipher however are very intriguing hinting and towards an improved workflow, connectivity, multiple format output and wireless iPhone remote monitoring.

The biggest things here today are a 4K camera that shoots RAW and 100fps slomo for under $6000 and the 6K version shoots 4K 50fps, but there’s no pricing yet. It looks like the KineRAW Mini we had in for review a couple of months ago has been upgraded to become a 4K camera. Here are more details (phrases) we could read. No guarantees yet:

• SDI connection (the previous camera only had hdmi and a slow 20fps @ 720p output which was difficult for monitoring. An SDI connection seems like a hint that something has been improved here)

• There are 2 USB3.0 connections (interesting)

• The camera has WIFI 802.11AC built in. Maybe the iPhone is used as a wireless remote monitor.

• PRICING:
Seems like the price for the body will be: $3220
Additionally the slowmotion feature and 4K feature seem to be $647 each.
Price for the KineStation can’t be identified.

The premium package including two 64GB mags seems to be $5823. All very affordable if it’s a good 4K.

• Now there’s new pricing. Looks like it’s for the first 100 customers and they get a discount. The specs we could make out: • It also has an iPhone leaning on the camera and WIFI connection. Something seems to be going on between the two.

• Records 6K in cinemaDNG to an SSD mag.

• and there’s also mention of an OLPF filter.

• Something about KineMINI 30%. Maybe that the KineMAX is 30% bigger?

• They now show 3 different kit options, but there’s no pricing revealed in the charts. I think that green symbol means something like “to be announced”.

• The words KineMAX and NAB 2014 show up. We will be there on April 7th and check the camera out. Since these are all 3D renderings I wonder how “ready” the products are and when they can be expected. This might take a little more time. Couldn’t decipher a release date.

They showed a “one more thing” slide and the rendering above followed. Not sure there’s actually anything else coming.