This is a very special (sixth) 50 minute episode of ON THE COUCH, in which we had the pleasure of hosting my friend Rodney Charters, ASC, best known for his work as director of photography on “24”, “Shameless” and now the new “Dallas”, Bruce Logan, ASC, best known for his work on the original TRON, the original Star Wars films and Batman Forever, as well as the owners of Zacuto, Steve Weiss and Jens Bogehegn – both of them shooters with decades-long experience in production themselves! 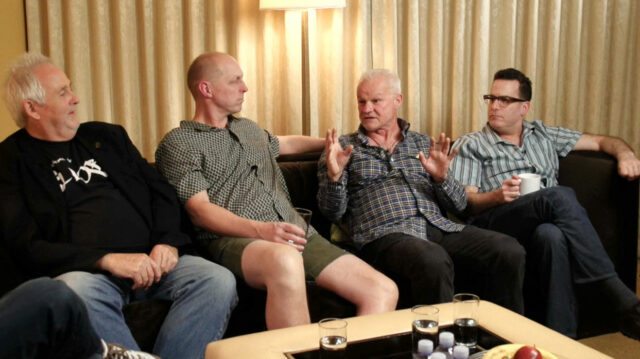 Of course we talked about the new Zacuto products, their nice new Gratical EVF (covered separately in an NAB show floor video here), their new tripod line and some other stuff. However, the main topics were more general about where the industry’s at and where it’s headed now – Rodney and Bruce shared their opinions about 4K and how they can’t see it make sense for distribution anytime soon – they talked about the specific challenges regarding lighting for 4K, especially female actresses.

Rodney raved about a new Rode accessory microphone for the iPhone and we talked about budget audio and the importance of audio in film in general.

Another topic was color correcting and the amount of control a director of photography has over his images in this day and age – where 4K allows the producer, director or editor to reframe shots without the DP’s consent. Also, there is hardly budget for the DP to sit next to a colorist in grading sessions. Consequently, Rodney and Bruce talk about how they often try to apply looks to the footage they shoot (through filters etc.) simply to regain some of that control.

It’s one of my favorite shows that we recorded during NAB and I hope you will enjoy it too. Rodney and Bruce are always very honest and direct and don’t care about the politics, they just want equipment to work. And the great thing about Steve and Jens is that despite being manufacturers, they know it’s not about the gear entirely – filmmaking is a complex process that involves so much more.