In our second session from the Paramount Pictures studio lot during Cine Gear 2014 in front of an audience, we were lucky enough to have Shane Hurlbut, ASC and his wife Lydia Hurlbut on our couch.

Shane is a rare breed of an ASC cinematography, constantly sharing lots of in-depth knowledge and experience on his blog, the Hurlblog. We talked about their reasons to be so open online, and how he came to actually embrace sharing knowledge this much. Turned out that his wife Lydia was the one to get this all started.

We talked about how much the industry has changed over the past 10 years compared to the 50 years before – and what that means for the craft of cinematography in this day and age. Being at Cine Gear, I also asked Shane what excited him most, and he specifically mentioned being particularly excited about the new MoVi M15 which was on display at the show, together with a Easyrig-like contraption that helps support the weight of the rig.

Touching on his recently wrapped shoot of Need for Speed 7 and Fathers and Daughters (starring Russell Crowe), we talked about the different challenges on sets. In Need for Speed 7, Shane had up to 50 cameras (including many Go Pro’s and 1DC’s as crash cameras) rolling at a time. And shooting the drama Fathers and Daughters by director Gabriele Muccino, he was surprised that for the first time in his entire career, he had shooting days that were sometimes only 6 hours long – because the production needed to save money, which allowed him to have more budget for the tools, crew and equipment he needed on the shoot. 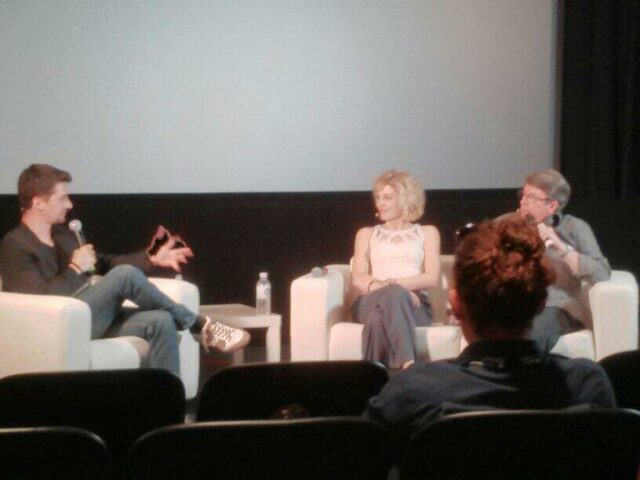 Talking about budgeting, I asked Lydia and Shane about how to budget correctly with a set budget – something a lot of filmmakers struggle with. Running a production company on their own, Hurlbut Visuals, Lydia and Shane also produce their own shorts or commercials from time to time – e.g. the short “The Ticket”, which demoed the 1DC. Shane mentioned how expensive acquiring the location permissions was (the ferris wheel in Santa Monica, for example) and what that meant for the rest of the budget.

Among many other things, we touched on storage workflow on sets like “Need for Speed” and how the DIT managed to keep track of all the cameras and store all the footage safely including backups. They shot over 400 TB of footage on that movie.

Lastly, we talked about work / life balance and how to achieve it. Lydia had very interesting things to say about that, having a lot of experience with Shane’s crazy schedule over all the years they have been together. She talked about how it is never a balance, because the partner is away for so long at a time during feature shoots – but then the time for family has to be made after such a job is done. It’s a tough industry to work in to have relationships for sure, but Lydia and Shane seem to be one of the few couples that have been together for a very long time successfully and happily in an industry that is not exactly relationship-friendly.