We welcomed our sponsor Vitec Videocom at an On The Couch show recording that we did at Cine Gear 2014 in Los Angeles recently.

Vitec Videocom already were guests at an On The Couch episode from NAB which you can watch here – but they had so many new products to share it made a lot of sense to host them again.

David Linstrom, a cinematographer based in Los Angeles, was also part of the discussion. He is one of the camera operators on the TV show “Wilfred” which is about a man dressed in a dog’s costume – and for that show, they are using Nikon D800 cameras only. We talked about why they decided to do that as it’s quite an unusual decision for a large TV series to shoot exclusively on DSLRs. David also talked about the advantages of the Anton/Bauer battery systems that they are using to power their units as well as their use of OConnor accessories and several tripods. 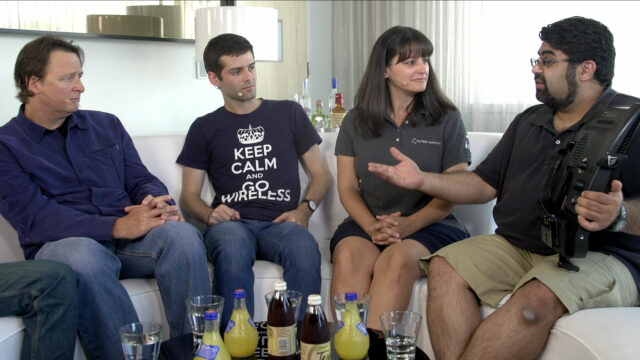 Michael Gailing, director of marketing of Teradek, which has also become a Vitec company last year, was in our show for the first time too. He talked about their wireless HD transmission product line-up which was massively extended and updated.

Sherry Fragomeni from Anton/Bauer clarified the new naming structure for the V-Mount batteries which are now going to be sold under the Anton/Bauer brand rather than the Sachtler brand (both Vitec companies) like previously planned.

Ali Ahmadi was the only repeating guest on the couch but he had great news to share: The new Litepanels ASTRA 1×1’s which come in a new modern housing with much larger LEDs like the 1×1’s we know. It’s also an incredible 4 times brighter. Combine that with the fact that a lot of Litepanels products have gone down by 45% in pricing, and you’ve got a veritable wonder on your hands.