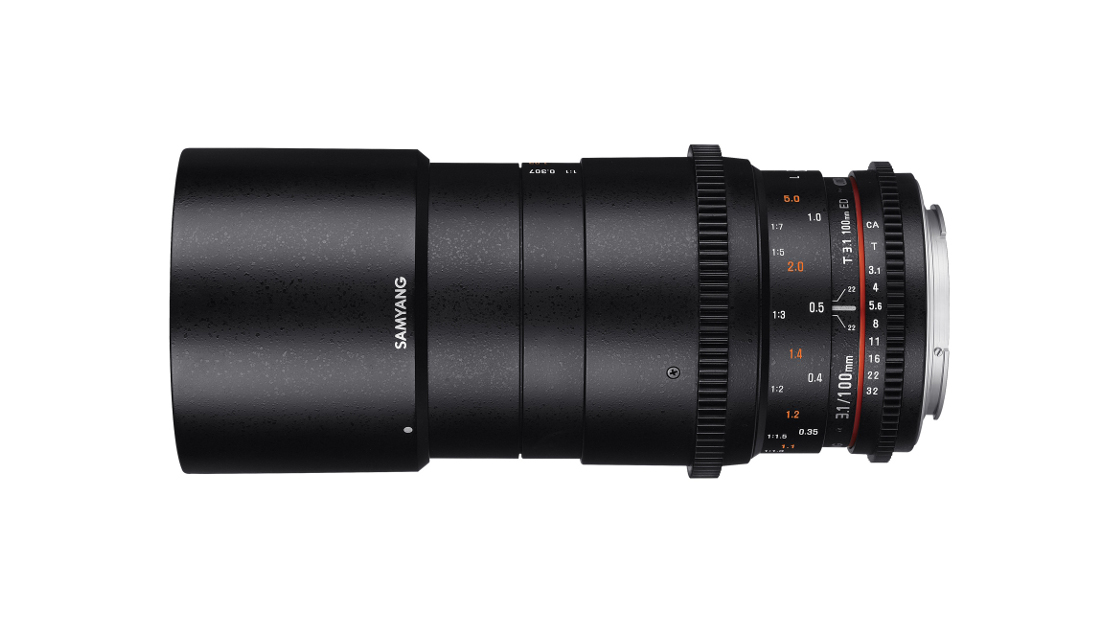 Samyang / Rokinon has announced another lens to its affordable manual focus lens line. The 100mm Macro will become available immanently in both Standard and Cine form, the latter sporting a de-clicked aperture, lens gears and T stop value.

These family of lenses are known as the many-brands, Bower, Vivitar, Rokinon, Walimex and first and foremost Samyang to name a few are companies to share the same spec of lenses, only the name changes. Rokinon and Samyang seem to share new lens releases, with the rest following suit shortly after.

In typical many-brand fashion, the lens spec replicates that of Canons L Series line; 100mm Macro f/2.8 (or T3.1 on the Cine version).

The 100mm Macro is built up of 15 glass elements in 12 groups, it has a 9 round-bladed aperture diaphragm and viewing angle of 24.8° on full-frame. Yes, this lens is compatible on both full frame and APS-C cameras. As expected for a dedicated macro lens, the Maximum Reproduction Ratio is 1:1.

Speaking on the Cine version, as per all Rokinon/Samyang cine lenses, the 100mm Macro has a de-clicked aperture ring, permanent lens gear for follow focus/aperture units and a T stop rating.

This means that Rokinons Cine lenses are a small and compact as they can be (great for shooters using small cameras setups), but do change in length therefore not optimised for seamless mattebox setups.

Unbeknown to some however, both lens gears are designed to match up throughout the line, providing consistency when switching out focal lengths but keeping your follow focus unit unchanged.

As with any Rokinon/Samyang Lens, the Rokinon 100mm Macro offers a huge price saving over the Canon L series counterpart. The big differentiator (as per usual) being the lack of auto focus.

The difference is perhaps at it’s most critical in this comparison. At a 1:1 ratio pinpoint focus for photography is often very reliant on autofocus; you have no option for it here if you’re a dabbler of both video and photo, or are a fan of the recent influx of video-able auto focus systems now available in video cameras. The 100mm Macro is a very effective focal length. As an owner of the Canon 100mm Macro f/2.8 IS L I can vouch for its broad use outside of dedicated macro work. Due to 1:1 magnification ratio, and close minimum focus distance, it can operate as a compact close range tele focal length lens; achieving angles a 70-200mm would very much struggle with due to it’s longer minimum focal length and/or larger physical size.