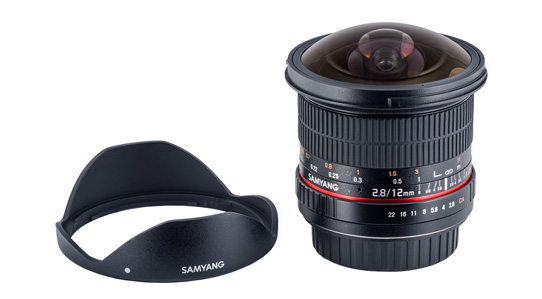 Samyang will present a new lens at Photokina; the Samyang 12mm is an f/2.8 fish eye that covers the full frame image area.

This is the first fish eye from Samyang to cover the full frame 24 x 36mm format. The lens optics consists of 12 elements in 8 groups, this includes 3 elements made of low dispersion ED glass and 2 aspherical lens elements to help reduce chromatic aberration and sustain image depth.

The full name of the lens is the Samyang 12mm f/2.8 ED AS NCS Fish-eye; NCS tells us that this (like 2 other wide angle lenses from Samyang) features the new nanocrystal coating to help with contrast and anti-reflection. Like the newer revisions of their other fish eyes, the 12mm fish eye will feature a removable hood.

There’s limited competition in the full frame fish eye class, with a maximum aperture of f/2.8 and likely price tag the Samyang 12mm fish eye it’s likely to become a popular choice.
Currently Canon only produce one fish eye lens, the 8-15mm f/4 L. It’s a stunning lens (I own one myself) but does carry a price tag that may put some off considering it’s a specialist lens.

Like all current Samyang stills lenses, this lens is manual focus only, it does not have auto focus; for this is a feature you’d have to turn to the more expensive Canon 8-15mm (or Nikon counterparts if you’re that way inclined), however some may overlook this feature as the fish eye look lends itself widely to deep depth of field shots, lessening the need for autofocus. Like all of these many-brand lenses, keep an eye out for the 12mm f/2.8 to appear under other brands such as Rokinon or Bower.

I’d also expect a cine version to be released, which would offer a T stop rating, de-clicked aperture and focus gear.

The Samyang 12mm fish eye will premiere at Photokina from the 16th September, if you’re attending be sure to check it out alongside their exciting new 50mm f/1.4.