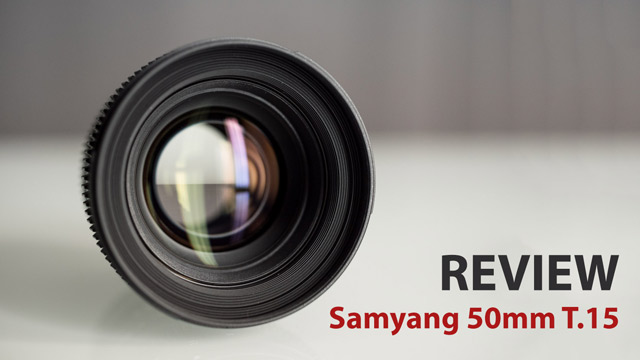 The new Samyang 50mm T1.5 Cine lens is here. Announced in August it is already available and we’ve now taken a close look and compared it to 3 other important 50mm full frame lenses. Samyang 50mm Cine Review – 50mm is the one missing focal length in the broad Samyang Cine Lens Lineup. It is now finally here and what we found is impressive. Read on to find out more.

Notice: We used the Sony E mount option of the Samyang 50mm T1.5 Cine and shot this test on a full frame Sony A7S.
The other lenses with Canon mount were used with a Metabones IV adapter.

These are the Samyang 50mm Cine’s advantages over a normal photo lens:
• It has geared focus and iris control for follow focus and iris control.
• The focus ring has hard stops on either end for accurate focusing.
• The Iris can be controlled manually and is “de-clicked” / has no steps.
• Full focusing ring rotation is about 160°.
• Standardised front diameter of 77mm among most Samyang Cine lenses. An attribute missing in comparison to more professional Cine lenses is a standardised front diameter and gear diameters among all Samyang Cine lenses for easy lens swapping when using a follow focus and mattebox.

The Focus and Iris rings operate very smoothly over the whole range.
Not too stiff and not too loose. Hard Stops seem strong enough to withstand a motorised focusing system.

How did the others perform in comparison?

The Zeiss CP2 50mm T2.1 Makro Cine of course offers all functionality a Cine lens should have. It has a total focus travel of about 270° in its makro range, but focuses from infinity to the Samyang’s 0.45m within an angle of about 90°. Personally I find 90° better for handheld operation.
The Zeiss CP2 50mm T2.1 Makro Cine is all metal and certainly performs in a different class in terms of built quality and functionality.

The Canon EF 50mm F/1.4 USM offers no Cine functionality whatsoever. Well, it’s a photo lens. Disregarding its optical qualities, as a video lens it is not ideal. The focusing ring has a play of about 1 millimeter which makes it somewhat inaccurate to use, but it has a travel angle of about 180° which is great for a photo lens.

The Contax Zeiss 50mm F/1.4 Planar (Retro) was equipped with a native Leitax mount hence offering a strong connection to the camera. In terms of Cine it does offer the advantages of strong hard stops, a focus travel angle of about 180° and a manual iris. The iris however is not de-cklicked and the focus ring has to be upgraded with gears in order to use a follow focus.

We test our gear optically with an Imatest ISO chart for up to 6K resolution. In this test we compared 4K files.

In terms of vignetting and distortion we could see a an obvious difference when compared to our Zeiss CP2 50mm T2.1 Makro Cine. Even though the Zeiss is a stunning lens it has a downside in terms of vignetting and wins when it comes to distortion. Comparing both lenses at T2.1 the Samyang has much stronger distortion while the Zeiss has only very little of this.
On the other hand one of the characteristics of the Zeiss CP2 line is very strong vignetting when used wide open. This can be a nice effect but can also be regarded as a negative point about a lens. Personally I like vignetting.

I won’t go into too much detail about technical stuff here, but will give you an overview of the lenses performance:

Distortion:
Of all tested lenses Samyang has the strongest distortion. However compared to the Zeiss CP2, all other lenses are very very similar. I would give the following ratings:
Samyang 100%, Contax 95%, Canon 90%, Zeiss 20% distortion.

Vignetting:
Of all lenses Samyang has the least vignetting when shot wide open. Canon and Contax come in slightly behind and on the CP2 as mentioned vignetting is quite strong.

Breathing:
Of all lenses Samyang seemed to me like the one with the least apparent breathing. This is a subjective observation. While all tested lenses breathe (zoom) when focused the Samyang performed best in this test, followed closely by the CP2. The Contax had more breathing and the breathing on the Canon seemed most severe.

Sharpness:
This is where the Samyang really shines. Shot at T1.5 the Samyang lens is impressively sharp into the edges of the whole image, a lot sharper and cleaner than both the Canon and Contax at the same aperture. See the image below for an optical comparison. The detail is taken from the top right hand side of an image with 4K resolution. This difference will also be noticeable in HD.
The CP2 is not compared as it is at T2.1 wide open. It certainly is the sharpest lens of the pack when shot wide open though.

Chromatic Abberation:
In terms of color fringing the Samyang also outperforms the Canon and Contax. There is very little color fringing when shot wide open. See the optical comparison below.

When compared to the Zeiss CP2 50mm T2.1 Makro Cine @ T2.8 we see that the Samyang 50mm T1.5 Cine retains very slight chromatic abberation at the edges when stopped down, but becomes slightly sharper at the edges than the Zeiss lens. See the image below for an optical comparison. The detail is taken from the top left hand side of an image with 4K resolution (below is a 100% crop). This difference will probably not be noticeable in HD.

The Samyang 50mm Cine lens offers very impressive optical quality. While it does introduce the most heavy distortion of all lenses tested it is the sharpest of them all and has only slight chromatic abberation and little vignetting when used wide open. One thing that really makes this lens Cine (optically) is that it can truly be used shooting wide open at T1.5 with very minor optical degradation. Unexpected!

These findings as well as the Cine attributes the lens brings make it a no brainer as to whether it is a good 50mm Cine lens for video work. 50mm is among the most popular of focal lengths and Samyang offers a great deal here.

Build quality is not superb (There were some smudges from the factory on the markings of our lens.), but feels quite good and like a professional tool out of the box. It is partly metal and operates very smoothly. We cannot test the lenses lifetime. Certainly the Zeiss CP2 is a tank in comparison, offering extreme precision and optical accuracy. For professional applications the Zeiss CP2 is certainly recommended and we use it internally for all our laboratory tests. For entry level and semi-professional filming and videography the Samyang is absolutely recommended. It offers the best overall package for the money and leaves both photo lenses we tested far behind.

We tested the Sony E-mount version. The lens is also available for Canon EF, Nikon F, MFT and Sony A: HERE

We have an exclusive cinema5D deal for our European readers: (20€ off on any Samyang lens) LINK