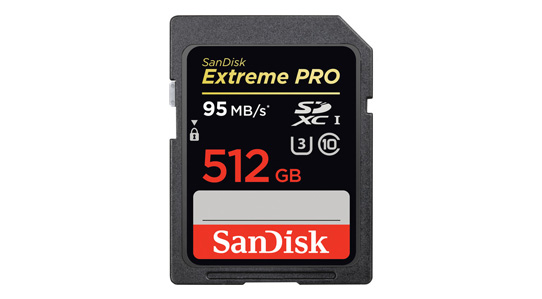 San Disk has announced a new card today that will trump all other top performing high capacity SD cards. The latest addition to the Extreme Pro line will provide users with 512GB worth of storage and transfer speeds of up to 95MB/s.

This is the first reputable company to produce a card of this size and speed – I have seen a few similar capacity cards knocking about from questionable brands, but nothing has ever materialised.

It was certainly only a matter of time before we saw this; previously 256GB has been our cap on SD. Compact Flash saw the ceiling raised earlier in the year, so we knew an SD release was imminent.

It’s pretty crazy to think how much data we can squeeze into such a small form factor. For reference of just how far we’ve come, here’s a picture of IBMs 5MB hard disk from the 1950s!

Judging lower capacity cards in the same line, and the fact that it carries the 95MB/s text, expect the Extreme Pro 512GB SD card to perform up to 90MB/s write speed, and up to 95MB/s read speed.