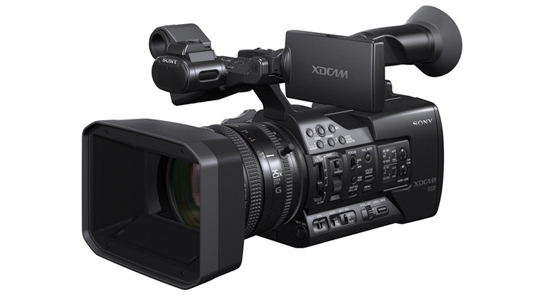 Sony has extended its XDCAM line with release of the PXW-X160 and PXW-X180. Both cameras feature three 1/3″ sensors with a first in its kind built-in variable ND filter.

I’ll start by stating the differences between the two cameras. The PXW-X180 features
Wi-Fi/NFS (near field communication) and GPS.

The Wi-Fi operates alongside a USB dongle, enabling wireless transfer of videos recorded in MP4 format. Which takes me onto another apparent difference between the two cameras; the PXW-X180 can record data rate selectable MP4 proxies. The inclusion of NFS also ensures communication with smartphone devices also. Download of the Content Browser Mobile app enables selection of recorded clips, with other controls such as set in/out points and record start/stop.

With that said, all other features mentioned below seemingly apply to both the PXW-X160 and the PXW-X180.

The cameras feature three 2-megapixel 1/3-inch type Full-HD Exmor™ CMOS sensors. They sport a fixed G series lens, a popular choice in more affordable handheld Sony camcorders. However unlike its predecessors, the Sony PXW-X cams feature a longer x25 lens (26mm-650mm 35mm equivalent) with independent hard stopped zoom focus and iris rings. This is great, not only do the separate rings offers faster operation but the hard stops means you have greater control.

Sony has often been partial to the stop-less lens ring. From the old NX5 cameras to the stock lens of the Sony FS100/700 cameras, as a user I felt you lost control with these endless rings. Especially with the likes of the latter where the inclusion of a variable speed focus ring was concerned (faster you twist the ring, faster the focus moves), you never quite knew where you were. Bringing back the hard stops is a great move in my opinion. Sony has consolidated a lot of its previous line by offering a wide variety of codecs recording media and focal range in these cameras.

Both cameras include two SXS card slots, which naturally support simultaneous recording and auto switch between both slots. Sony has made specific reference to compatibility with SD and XQD cards via an SXS adaptor. Both have been available previously for other SXS slotted cameras (SD has been around for years), but Sony is making it sure this feature is clear to further bolster the cameras wide compatibility potential. A new exciting feature is also included;
a variable ND filter. Both cameras feature the standard 3-wheel ND filter (clear plus two grades) however an additional wheel enables more precise levels of ND ranging from 1/4ND to 1/128ND linearly. I hope to see this feature used much more in future camera releases.

Whilst a small chip camera may not excite many of us filmmakers whom have embraced the large sensor revolution, it’s great to see Sony pushing so many assets into one camera. There’s a whole host of features included in the PXW-X160 and PXW-X180 that now make the FS700 look a little out of date. Cue a variable ND, XAVC and SDI enabled large sensor camera?