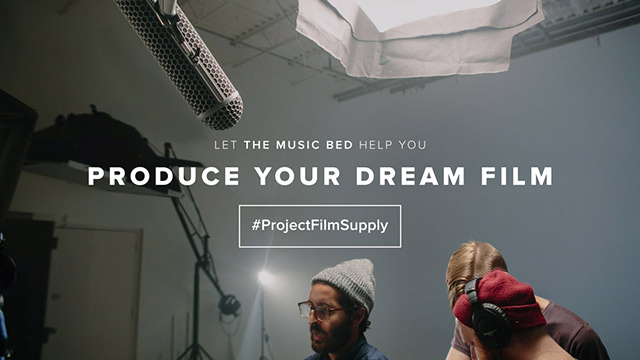 Our friends at The Music Bed have just announced their biggest campaign to date: They’re giving away loads of gear + giving one lucky Filmmaker a chance to have their dream film produced!. The Music Bed has become very popular for small scale productions as they offer quality music and instrumental tracks by creative musical artists. At cinema5D we’re often using their tracks for our own productions and camera reviews.

Today they’re inviting filmmakers to participate on their #ProjectFilmSupply campaign that will be running for one month (starting August 4). They’re asking the filmmaking community to submit a short film idea + mood board for the project they’ve always dreamed of creating.

In the next phase people will vote for the different submissions and finally among the top three, one project will be chosen to become a reality. The two runners up will receive fancy prizes from renown manufacturers. In total The Music Bed will dedicate $50,000 to the winners of the campaign.

The Music Bed says:
Our mission at The Music Bed is to help visual artists tell stories better than ever. That’s why we’re so excited about our latest campaign: #ProjectFilmSupply. The idea is pretty simple. We’re going to help filmmakers bring their dream projects to life.

The emotional promo video above is very well done and worth a watch. It surely catches the nerve of time and encourages to participate in this intriguing campaign. If you have a dream project in mind enter here: www.themusicbed.com/projectfilmsupply. Create CineD Account
mode_comment
We use cookies to ensure that we give you the best experience on our website. If you continue to use this site we will assume that you are ok with it. Learn More