We’ve reported about several interesting inventions by Korean manufacturer Varavon before. This time around at Photokina 2016, Varavon introduced their new 3-Axis VR Drone for the first time.

The Varavon 3-Axis VR Drone is a large virtual reality camera platform with a special gimbal design that holds the camera array steady even during fast movements and strong wind. At their booth at Photokina, the guys from Varavon showed us how the gimbal stabilization works. Unfortunately, they were not allowed to fly the drone in the convention center halls or even outside due to drone laws in Germany. 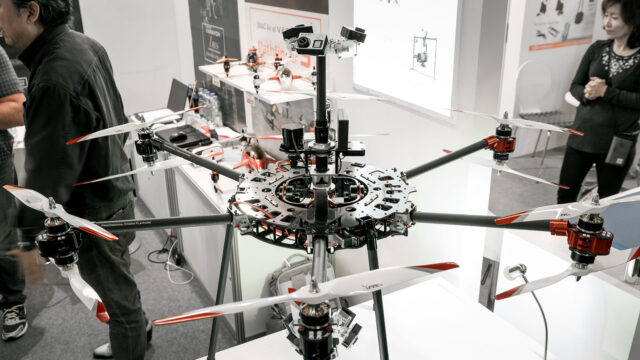 At the moment, the VR Drone market seems very limited. A quick Google search results in several custom built VR Drone setups, but besides one manufacturer there were no other large and commercially available flying platforms with a gimbal like the one Varavon displayed. According to the sales rep at Photokina 2016, the Varavon 3-Axis VR Drone can take a payload of up to 12kg and has a flying time between 12 and 15 minutes. The cost of $27,000 seems quite high, considering that the M600 is available at under $5k and has a similar size, but with no special VR gimbal, of course. But since this is probably the first drone of its kind, I suppose a higher price is acceptable for those looking to create an aerial VR array with so many cameras.

According to Charlie from Varavon, the drone is “ready to sell now”. The fact that it does not show up on the Varavon website yet might indicate that you have to contact them directly if you’re interested in purchasing this flying crazyness.