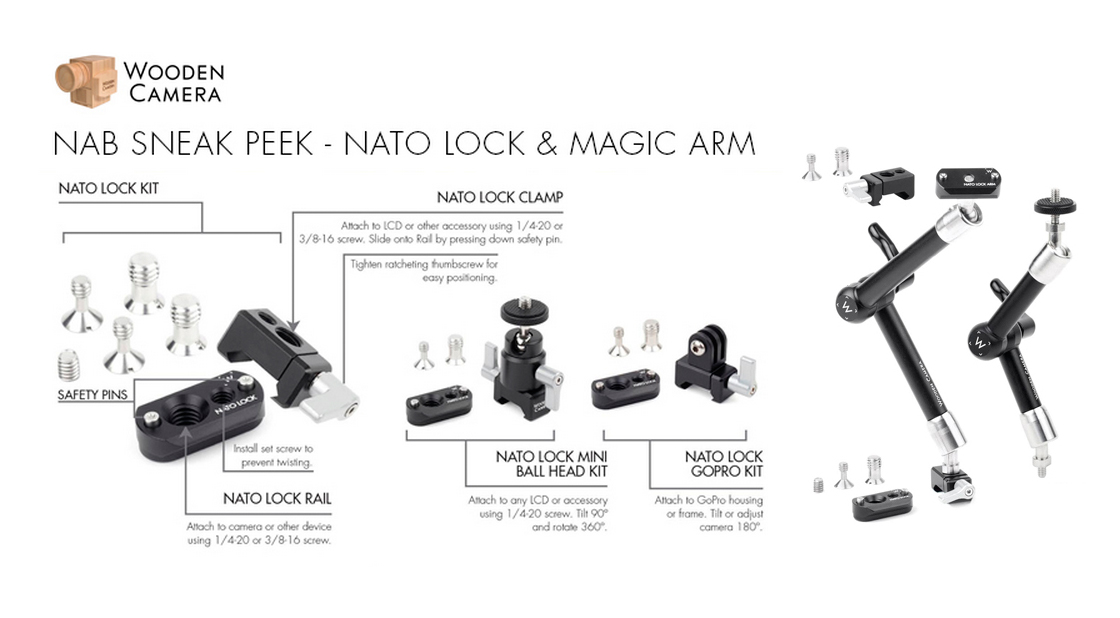 With NAB just around the corner, lots of manufacturers quieten right down with news, waiting for the doors of Las Vegas Convention Centre to open before unveiling new releases.

Some however offer sneak peaks and Wooden Cameras new NATO Lock systems have caught my eye. A very small announcement (both in the physical and relative sense), but one that tackles a very important and often overlooked issue that us filmmakers endure; attaching accessories to cameras by the way of screws and threads.

It’s something we go through on a daily basis, accessory A attaches to accessory B by the point of a 1/4″ or 3/8″ thread. As filmmakers we master the art of spinning our monitors round in circles, slowing down just at the right time to release the magic arms screw from connecting thread.

It’s actually a complete pain in the backside. Compact rigs leaves little room to unthread accessories, it takes time and can be dangerous if you’re not careful.

Quick release is your friend, Zacuto had a light bulb moment when shifting over to levers and 15mm studs. The system is faster, safer sturdier than screw to thread. However it hasn’t had quite the knock on effect I certainly would’ve liked.

Only until only now has another manufacture come up with a different quick release option.

Wooden Camera uses the NATO rail throughout their systems, so it’s no surprise seeing it again here. And usefully so as it means wide spread compatibility with all Wooden Camera accessories as well as some other manufacturers.

The ultra short NATO rails and clamps connect between your accessories by the form of 1/4″ or 3/8″ thread and counter sunk screws. This gives you a quick release mount between camera and accessory.

The new releases from Wooden Camera include a NATO lock Magic Arm, NATO Lock Ball Head and NATO Lock GoPro Kit meaning you can pretty much assign all accessories with a quick release mate.

Comparing to the Zacuto 15mm stud system, it has the ability to be more widely used throughout other accessories, as the length of the rail is up to user, as well as slightly slimmer profile when comparing both quick release components.

I’ll update with purchase links when they become available. If you’re attending NAB be sure to check out Wooden Camera at booth C9948.