The new memory card from SanDisk is the world’s first 1TB microSD card. It is certified as UHS-I V30 for video and A2 for use in smartphones (minimum random read and write for launching and loading apps). The card is now available for pre-order. 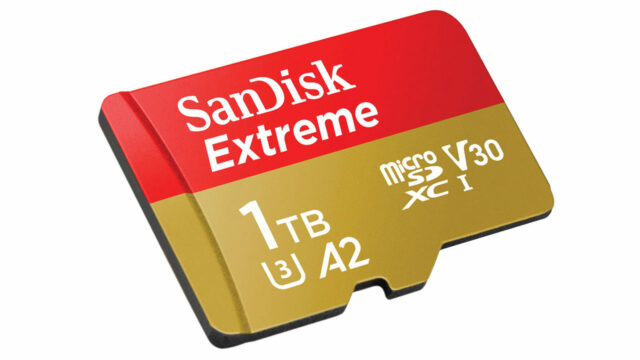 SanDisk, a part of Western Digital, is a popular company when it comes to reliable memory cards. Majority of my memory cards are from SanDisk and, although they can be a bit pricey, they never failed me. SanDisk announced the world’s fastest 1TB UHS-I microSD flash memory card already at the end of February at Mobile World Congress. Now it is possible to pre-order this memory card. What are its features apart from the gigantic capacity?

The 1TB SanDisk Extreme UHS-I microSD card reaches speeds up to 160MB/s (read) and up to 90MB/s (write). The cards reach these speeds by leveraging Western Digital’s proprietary flash technology. For us filmmakers, the minimum certified writing speed is the most important number and that is V30 (30MB/s). That means this card can sustain a bitrate of 240Mbps without any problem. The new SanDisk Extreme card will also be available in 512GB capacity. The cards are shockproof, temperature-proof, waterproof, and X-ray-proof.

Those new cards feature the A2 specification for launching and loading apps. That defines performance as minimum random read of 4000IOPS, minimum random write of 2000IOPS and minimum sustained sequential write of 10MB/s. The A classes are specifically created for use with smartphones which need quick access to lots of small files when running apps directly from a memory card. More information about this application performance class can be found here. 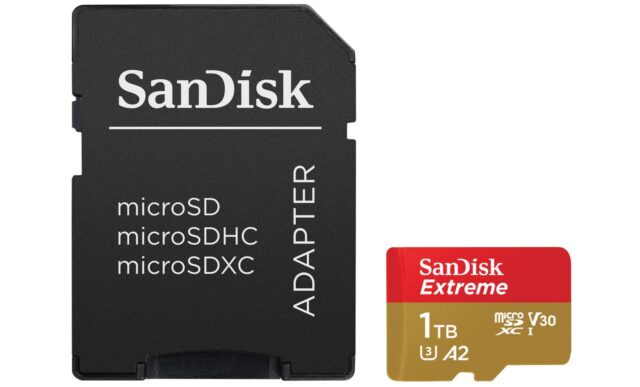 The 1TB microSD card comes with a full-size SD adapter.

On a side note – the SDXC (Secure Digital eXtended Capacity) technology announced in January 2009 supports cards up to 2TB of capacity. When it comes to speed, it maxes out theoretically at 312 MB/s over the four-lane (two differential lanes) UHS-II bus. Previous SDHC had a maximum limit of 32GB. The upcoming technology SDUC (Secure Digital Ultra Capacity) was announced in June 2018 and it will support memory cards with a hard-to-imagine capacity of up to 128TB and speeds up to 985 MB/s.

The possible benefits of such a huge card for us filmmakers could be the use in smartphones, drones and action cameras. 1TB of storage might come handy if you want, for instance, record a very long timelapse with a GoPro and you can’t swap cards. It can also be good if you capture a lot of video content with your Android phone. Now, for instance the FiLMiC Pro app does not allow to record video with the highest bitrate settings directly to the SD cards, but you can transfer those big files there later and make space in your internal memory for more clips. Of course, there’s always a danger of losing a lot of footage of a large card goes bust out lost, so its immense size shouldn’t be the only consideration.

Other than that, the only downfall I see with this card right now is its price. The MSRP of the new 1TB microSD form SanDisk is a whopping $449.99 US ($199.99 for the 512GB version). That’s simply how it is with innovative products. With world’s largest capacity memory cards it has always been the case. Sure, if you don’t need 1TB of storage on one card and you can swap cards, then you are better off with two 512GB cards right now. There are situations, however, when you simply need all that capacity on one card and SanDisk allows that now.

What do you think of the new 1TB microSD card from SanDisk? Did you ever need all that capacity on one microSD card? Let us know in the comments underneath the article.