Announced along their new drone and gimbal, the new Osmo Z-Axis is a mechanical accessory for DJI’s tiny gimbal which adds compensation on an extra axis of movement.

Although the Osmo is a very capable little handheld gimbal solution, its footage still exhibited some of the typical up and down bobbing motion inherent to footage shot while walking. Responding to customer demand for more “Steadycam-like” footage, DJI has release an optional attachment that easily integrates with current Osmo models. 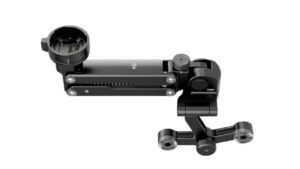 The Osmo Z-Axis is a spring loaded hinge in that attaches between the camera and the handle, compensating movement with each step. It features a small knob, which regulates spring tension to adapt movement stabilisation to your particular needs. Naturally, being only a mechanical solution, it doesn’t draw on the Osmo’s battery as it doesn’t require any extra power.

As you can see in our hands-on video above, the difference is quite noticeable, adding that extra something that certainly gives it much more of a Steadycam feel.

The DJI Z-Axis is already available on the DJI Store for $128, and was announced along with many other Osmo updates and accessories, including the new Osmo RAW capture system, compatibility with DJI’s Zenmuse X5R camera and new power supply options.