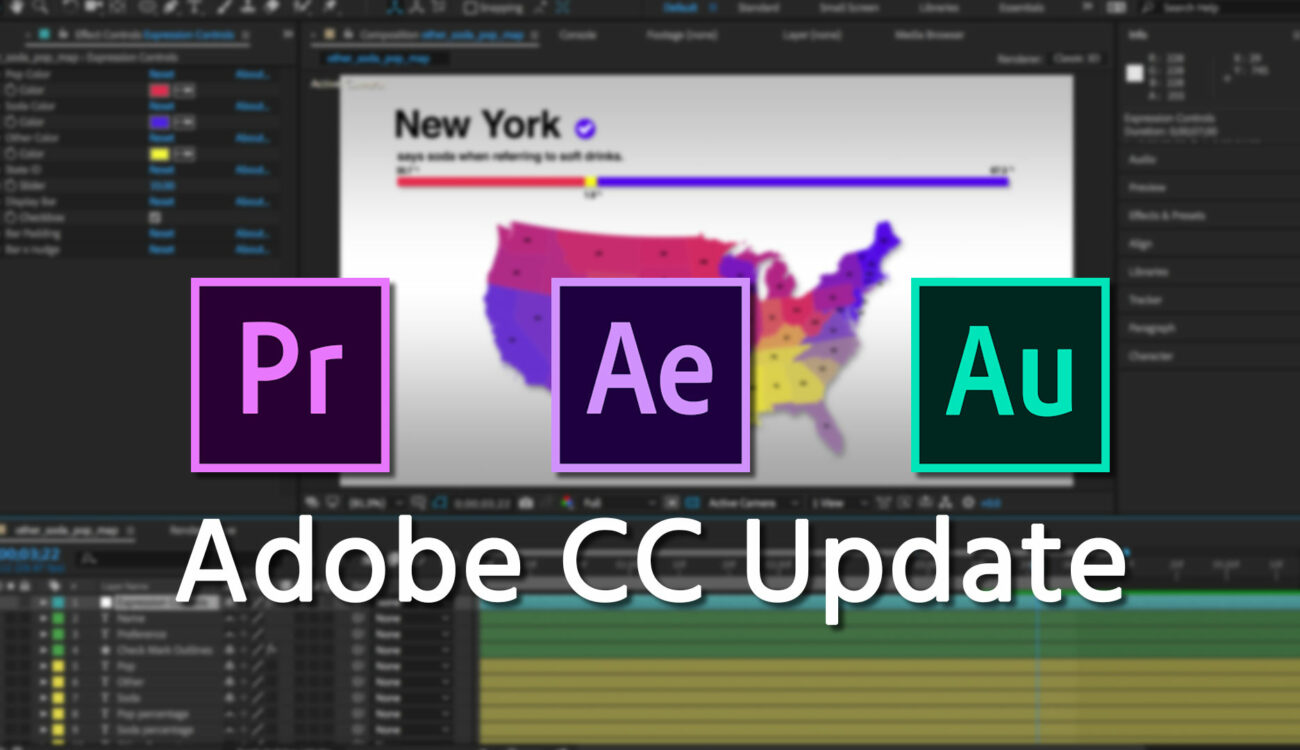 With this latest Adobe CC update, Premiere Pro sees the implementation of simultaneous editing across multiple projects, allowing users to import projects into one another with fully-flexible control over copying extracts of sequences, editing them, or even collaborating and sharing the projects across multiple users. Previously, Premiere Pro CC couldn’t open more than one project at a time, and users only had the option of importing either a whole project or a sequence – a workflow process that lacked fluidity. This improvement is far more streamlined and faster than working in projects separately.

Teams in the same facility now have the option of collaborating on shared projects at the same time. On larger productions or projects with multiple episodes and sequences, simultaneous editing can improve the editing time and overall workflow. Users can be granted specific access, whether it is read-only or fully editable, however this is only available to CCT and CCE users.

The new Adobe CC update also sees improvements in Premiere’s virtual reality and 360-degree video capabilities. These include transitions, composited titles and orientation-based audio in the VR environment. An exciting improvement is Adobe Immersive Environment, giving editors the ability to use a VR headset while navigating through the timeline to have a true experience of the content before finalizing and exporting a project. Keyboard-based edit tools are accessible so one can perform cuts and changes while experiencing the environment in real time. Effects applied to a VR timeline across stitched and stereoscopic media are also now cleaner, without artifacts or seamlines.

The Premiere Pro CC Essential Graphics panel has also been improved. Responsive design features will now respond intuitively to temporal and spacial changes to graphics and text, whether that is changing clip duration, adjusting the frame size and so on, without affecting the in/out animation keyframes. Multiple graphics layers can also be edited simultaneously too, for implementing stacked effects. Fonts can now also be selected as favourites and previewed in the program monitor. The responsive design also works in conjunction with the many motion graphics templates provided in Adobe Stock.

Updates to After Effects CC include better integration of data-driven effects and animations using JSON data files. These can be imported natively into a project and used to develop automatic graphs and charts like those used in infographics, which can be edited over time. Interpolation in the data stream is performed automatically as effect parameters can be simply pick-whipped to the data group, for faster and more efficient animating.

The performance of After Effects CC has also been improved, with the Mercury GPU engine accelerating motion blur, layer transformations and heavier effects while rendering. This is a handy improvement when using the integrated 3D application Cinema 4D Lite to composite true 3D objects in After Effects compositions.

Other updates and improvements for After Effects CC include the ability to animate graphic path points to shapes, layers and effects, linking with the new data-driven functionality. Keyboard shortcut mapping has also been updated with a visual guide on custom shortcuts, and we see the same improvement to the font menu and VR editing that Premiere Pro CC has received.

Adobe Audition CC also has a number of updated features which include Auto-Ducking, where the volume of music is lowered automatically when dialogue or other sounds are audible. The software detects the dialogue and measures it against the loudness of music, reducing the latter in the timeline automatically. You can adjust parameters such as the fade responsiveness and sensitivity much like you would with keyframes, but saving much more time in the process.

Other updates include faster mixdown performance, promising 400% faster processing than the previous CC version, as well as the ability to make changes to effects or parameters while playing through the timeline.

Overall, this Adobe CC update adds a number of intuitive improvements that will certainly benefit many Adobe users. For more information on the new features and updates.  You can sign up for an Adobe CC subscription here.

Will you be using the features in the new Adobe CC release? What updates would you like to have seen? Let us know in the comments.