The Adobe Premiere CC 2017 update was just officially released, so we’re taking the opportunity to publish our recent exclusive interview with Bill Roberts, Adobe senior director of professional video product management. We discuss some of the new features in Premiere CC, as well as some interesting insights about the inner workings of Adobe’s software development. 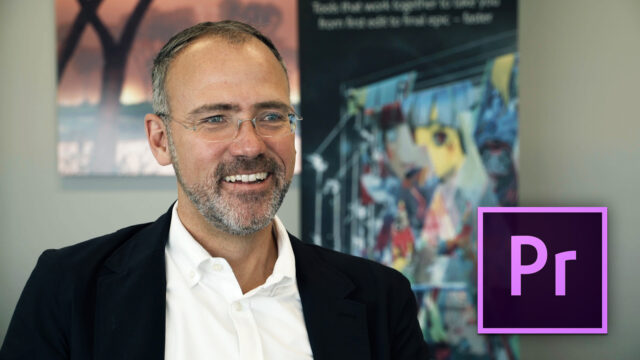 The cloud collaboration engine and the accompanying team projects feature enter version 1.0. With this set of tools, it becomes more convenient when working together on a project. Also a personal undo stack is now part of the project’s history. You can step through each and every creative decision you’ve made along the way and undo anything you need.

Muliple open projects are finally possible with this version of Premiere CC. You can have as many open projects as you like at the same time, and it’s also possible to move objects between these open projects. This one was a big feature request from FCP7 users.

As part of Adobe’s efforts to accommodate the needs of Hollywood’s editing workflows, you can now lock projects while working on them. They will then be read-only for the rest of your collaborative team. Once finished, you can release them again, so you can think of it as a kind of serial collaborative mode.

Adobe has aquired the technology behind the Skybox suite by mettle. This technology has been merged into Premiere Pro CC, with mettle founder Chris Bobotis having taken on the role of head of immersive at Adobe. As a first result, Adobe has launched its so-called immersive environment. With it you can view your content using a VR headset, but now your timeline will be displayed right within it as an overlay, letting you check the final result while interacting with it.

A lot of minor features have been added or updated, such as enhanced motion graphic templates. As with every new release, a lot of other details have been improved too. One feature that stands out here is the ability to remove all gaps in the current timeline with the press of a single button. Yay!

Timeline of Features at Adobe

In the second part of our interview, Bill was kind enough to share some interesting insights about the inner workings of Adobe’s software development.

Bill’s job is to define the longer term (i.e. 3 to 4 years) goals for the product. Meetings will then be set up with the specific teams of the given product or feature. These teams basically work on a never-ending list of to do’s which is mainly driven by customer requests.

The team then tries to distill several milestones for that year’s release cycle. For example, for the last 8 years, Adobe was pushing hard on broadcast. The last two years were a little bit more focused around the needs of big-budget Hollywood productions, which can require quite different workflows from indie film productions.

Adobe, like any other software company, works hard on eliminating bugs and stability issues with every release cycle. Each feature of Adobe’s products is tested by both an automated machine process and a human person (a lot of them, actually). And of course Adobe gathers data from incoming crash reports, which help them identify specific crash scenarios. It really is quite challenging to build an editing software that is compatible with every computer setup it’s running on and with every camera-specific data format out there.

While it doesn’t help to cheer you up whenever a crash wipes out your unsaved work, it’s still good to hear that, according to Bill, the crash rate has been going down with each release cycle. Also it’s good to see that people like Bill keep an eye out for problems and issues on social media or even here, on cinema5D! That way customers have a real face to talk to, which I think makes a big difference.

The Future is Video

As per a recent blog post by Cisco Systems, over 82% of IP-based internet traffic will be driven by video by 2020. Of course, a big chunk of this will be unprocessed streams like conference calls and such, but video is still undoubtedly on the fast lane. Companies like Adobe, Blackmagic Design, Apple and others are working hard to increase their market share in this segment. This creates competition, which is good for us customers, and promotes innovation in general, so keep creating and keep that feedback coming!

What are your experiences with Adobe’s set of editing tools? Not an Adobe user? Which editing software do you use? Let us know in the comments below!