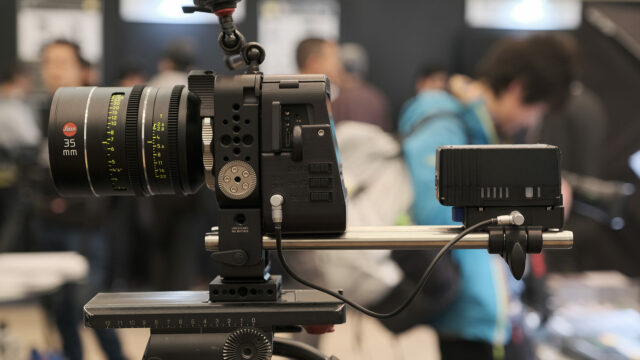 ALPA is a swiss camera manufacturer with a long history going back to 1930s. Nowadays, they do not produce their own sensors – they rather work with digital and analog backs of other medium format cameras. We met with representatives of the company already back in September at Photokina 2018 where they showcased the ALPA PLATON – the Hasselblad H6D-100c housing. The housing provides PL-Mount and it is aimed to improve workflow for filmmakers who want to get the medium format look. My colleague Bato wrote a nice post about it (including our interview from Photokina) – link HERE.

Fast forward to February 2019 – ALPA seems to have a new version of the Hasselblad H6D-100c camera housing which they are showcasing at CP+ show in Japan. We didn’t get any official name of the product as it is still in the testing phase and not yet commercialy available. We are not sure if the name ALPA PLATON still remained, so for the needs of this article, I will only call it ALPA camera housing.

In our interview, an independent filmmaker Matthew Carmody, who has been using the ALPA custom camera housing, told us about the new design and its features.

First (and most noticeable) redesign concerns the powering system. Obviously, when using only the digital back of the Hasselblad H6D-100c without the camera’s grip, there is no battery and it needs to be powered via the DC power-in connector. ALPA decided to replace the previously used powering system based on Sony NP-F batteries with the V-Mount system due to the higher capacity, faster charging and also simply because V-Mount is a widely spread industry standard already included in many filmmakers’ kits. In this particular camera they used the V-Mount Mini battery plate, which sends the power through LEMO cable in to the DC power-in connector on the side of the Hasseblad brain. There is also a D-tap version of the housing, which can be more convenient for gimbal work as it can draw power directly from the DJI Ronin or Freefly Movi battery and therefore stay more compact.

The housing still provides PL-Mount in the front and various mounting threads all over the body. There is now a new small fan underneath the camera body, which ALPA added to the design after getting a feedback from Matthew who experienced some overheating issues when filming in hot environments with the camera.

On the right side of the ALPA housing, there is only a door providing access to memory card slots (SD and CFast 2.0). On the left side, ALPA designed a small panel with three physical switches. One switch is used to turn the camera on or off. This switch would normally be located on the camera’s grip, which is removed in this case. Other two switches are being used to operate the fan located underneath the camera body. One switch turns it on or off and the other one changes between “low” and “high” mode for different fan speeds. There is also the DC 12-24V power in connector on the panel.

The small panel on the left side of the camera does not obstruct the important connectors on the Hasselblad body itself. There is still access to the headphone jack, audio-in microphone jack and HDMI connectors for instance.

There is no official information about the availability or pricing of the ALPA camera rig, but the design looks like it is already fine tuned and should be available relatively soon.

What do you think of the ALPA camera rig? Did you ever use medium format camera to capture motion image? Let us know in the comments underneath the article.