Nino caught up with Ted from Aputure at NAB 2018, to talk about the latest iteration of their incredibly popular 120d, the Aputure 120d Mark II. 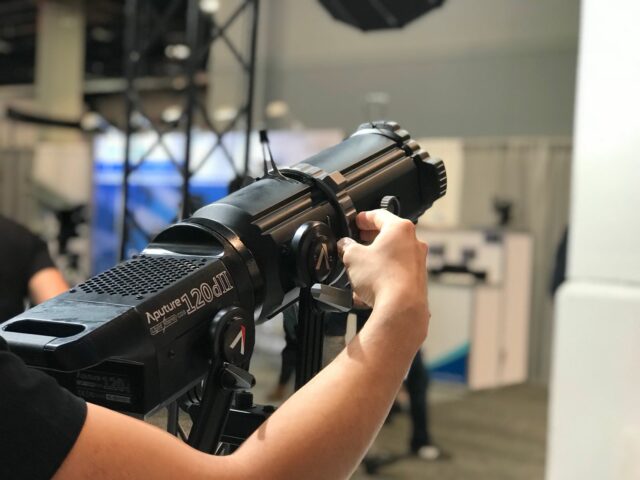 Retaining the key features that users have come to love about the original, the Aputure 120d Mark II keeps the same form factor and Bowens accessory mount. Based on user feedback, however, Aputure have made the 120d Mark II 30% brighter. The 120d Mark II now draws 140w of power (20w more than the original 120d) but the big increase in output, from what was already a punchy fixture, is great news. Also a major refinement is the ability to now make <10% fine adjustments to the dimmer. Talking of which, Aputure have now integrated the controller and ballast in to one unit, making a much neater setup. The new unified controller also features Neutirx locking ports for the included 6m, colour-coded, cables as well as the V-lock battery mount on the back and integrated wireless control. Finally, in response to user and rental houses requirements, the general sturdiness of the yoke on the 120d Mark II has been improved, meaning the mount and threads will stand up to heavier use, and the lock has been changed for a handbrake style lever, giving more rigidity. The new yoke can also now be underslung, giving users more options for locating and mounting the fixture. 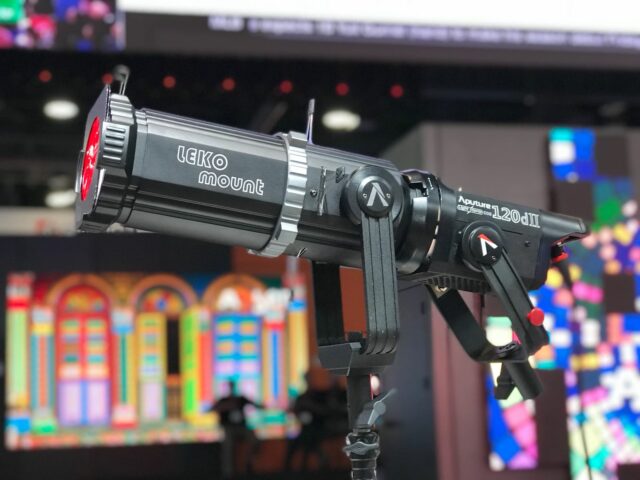 Ted from Aputure also showed Nino their latest accessories for the 120d and 300d, including a new 32-sided light dome. Like the old 16-sided light dome, this is a great way to soften the hard output of the 120d and 300d, allowing for three stages of diffusion (half frost, full frost and ‘magic’ cloth) but now with a much more spherical shape to the light – perfect as a catch light in your talent’s eyes. Aputure say the new design allows the light dome to be set up in two seconds and broken down in four! In addition, a new filter tray holder allows for small amounts of gel to be used inside the dome, making it very easy to add CTB, CTO or any other type of gel. The new dome will be priced at $200 and will be available in “the next few months”. Oh, and there’s also a new mini dome, which has the same quick setup design and will have an RRP of $150.

Not to be outshone, Chimera have also announced new light banks for the LS1 and LS1C which, along with some new barn doors and a Leko mount Aputure have also announced for the 120d and 300d, means there are now some really compelling modification options for Aputure’s popular LED lights. The Leko mount in particular, opens up a whole host of light shaping options, by giving users the ability to project and focus the output of the 120d and 300d, in 19, 26 or 36 degree spreads, using their different lens options. Users can also add slashes and other shapes using the integrated barn doors, as well as allowing the use of Gobos for creative patterns or logos to be projected. Aputure say the big thing is there is also absolutely no colour fringing when using the $400 Leko accessory, which is due to ship by “end of year”.

If you are an owner of the original Aputure 120d, share with us your thoughts about this light in the comment section below.