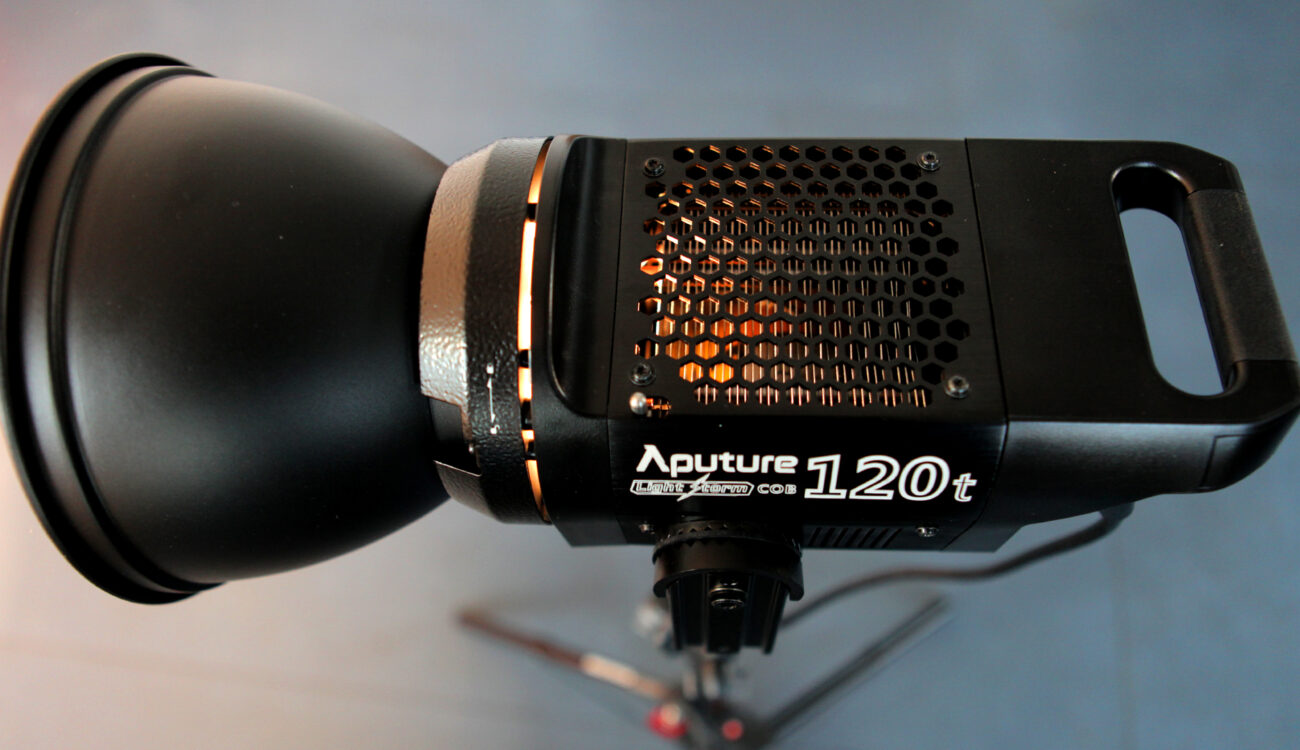 Times are changing, people! There’s a transition going on from traditional lighting with bulbs driven by glowing filament to high-output and high-quality LED lighting. The Aputure LightStorm LS C120t is a clear example, so let’s take a closer look. 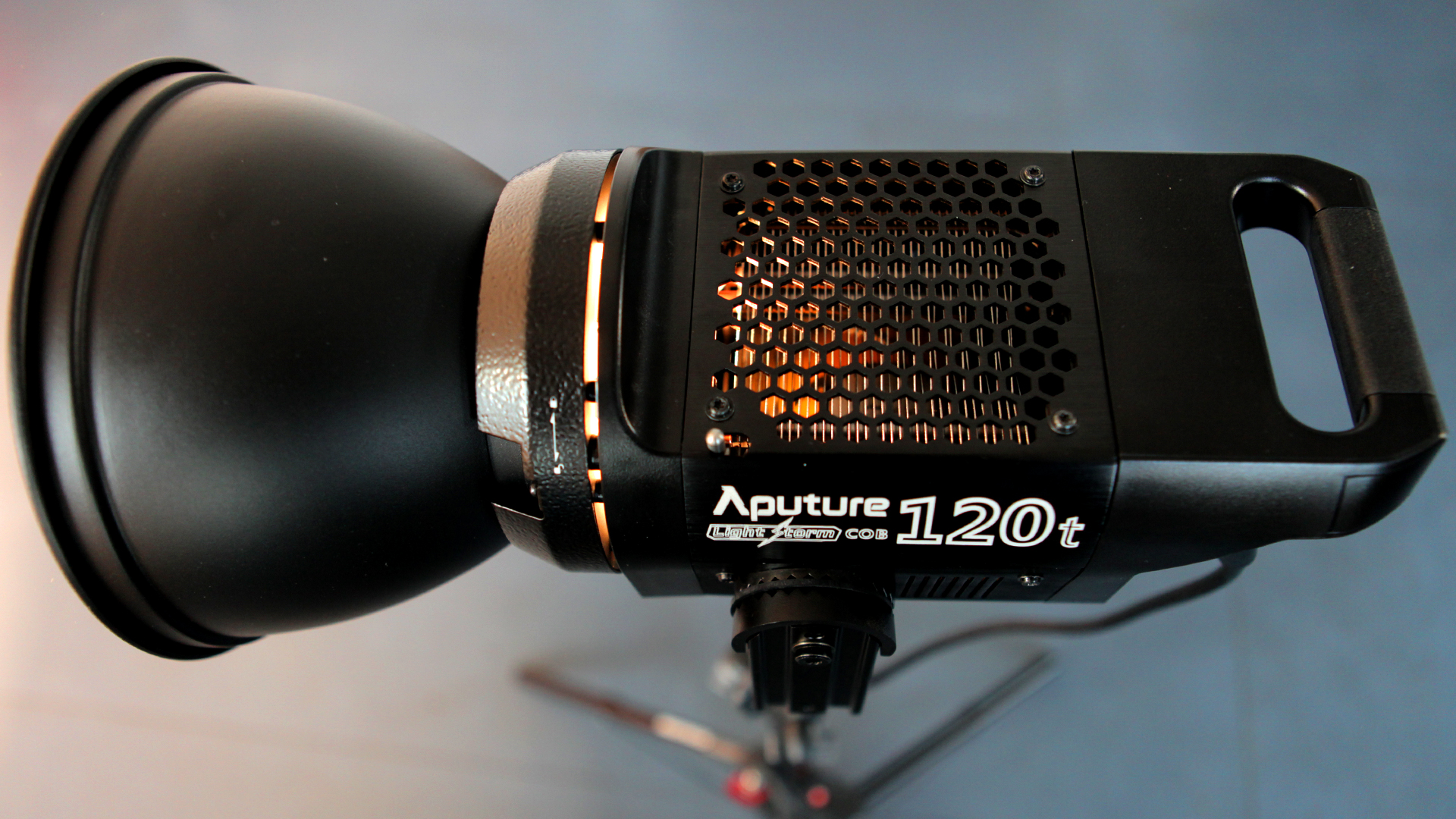 LED lighting is coming of age

Granted, the evolution mentioned above is not brand new, but to my mind as a filmmaker, it took me a while to really benefit from it. Lighting technology is transitioning from a century-old (but trusted and high quality) bulb driven devices to the LED lights of today. For a quite long time, LED lights were variations of 1×1 panels in different shapes and of very different quality and output.

These panels have one major downside: since they are formed of an array of individual LEDs, each tiny light source casts a hard shadow which results in very weird and unnatural looking patterns of multiple shadows within the frame. To solve this you need to apply heavy diffusion which in turn results in lower output. In addition, many of these early day panels had a very low CRI (Color Rendering Index) which translates as weird magenta or green shifts in the light.

This light does things a little different. First, its CRI rating is quite high at 97+. This is not unusual with next generation LED lights but it’s a necessity in order to get professional results. The output of just 2500 LUX at 1m won’t make the Aputure LightStorm LS C120t the best in its class, but it’s bright enough for a decent tungsten lit interview setup.

The giant single LED module in the Aputure LightStorm LS C120t is actually made of a vast number of micro LEDs which are driven by a so-called COB, a chip on board. As a result, the LightStorm LS C120t acts as a single-source high-output LED, which can then be modified with light shaping accessories.

It seems like Aputure will be introducing light shaping accessories like a dome, an umbrella and a fresnel lens to their lineup in the near future. The fresnel lens will be very interesting, since it will increase the light intensity and open up more fields of application for the LightStorm LS C120t. 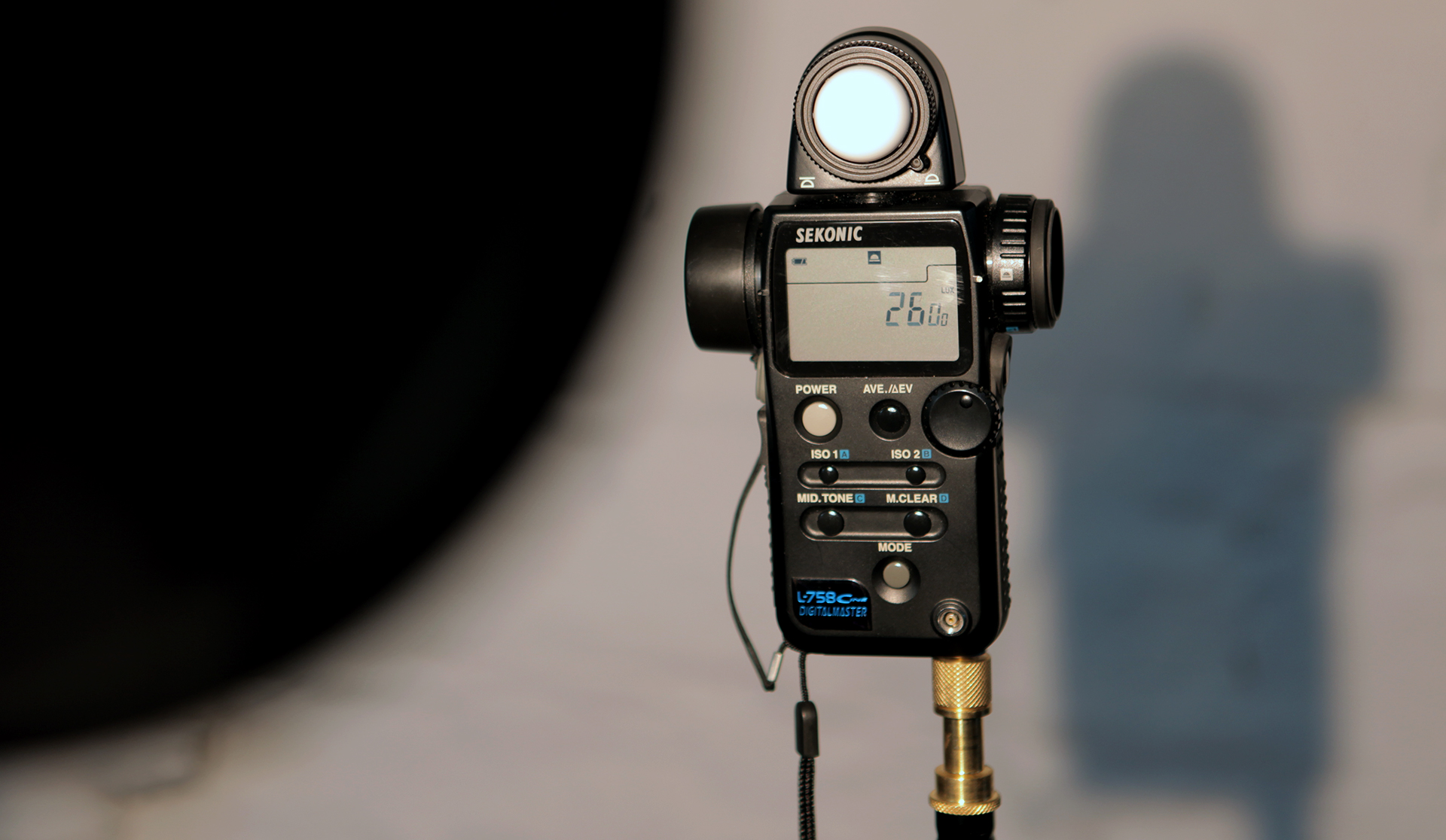 Third, the Aputure LightStorm LS 120t comes with a very familiar mount system, at least in the photography world: the Bowen-S mount. At first I was a little disappointed to find that the light comes with nothing but a plain silver reflector. But with this mount you can put any light shaping accessory you want on this light. Very nice!

My findings about the LightStorm LS C120t

My first impression was: this doesn’t look like a tool for digital cinema but one for still photography. I’m used to finding some barn doors or similar accessories on a light intended for shooting video. But with the integrated Bowen-S mount, you can choose to put on barn doors like those if you like. Or not. Or a softbox, or a gold reflector, or a grid, or… you get the point. I don’t own any compatible accessories so I couldn’t try it, but I think it’s a neat idea! A Bowens-type softbox is way cheaper than a “proper” Chimera of the same size, and you don’t even need a speedring. The provided silver reflector creates a 60° beam angle, while the light without the reflector outputs a 120° beam angle. 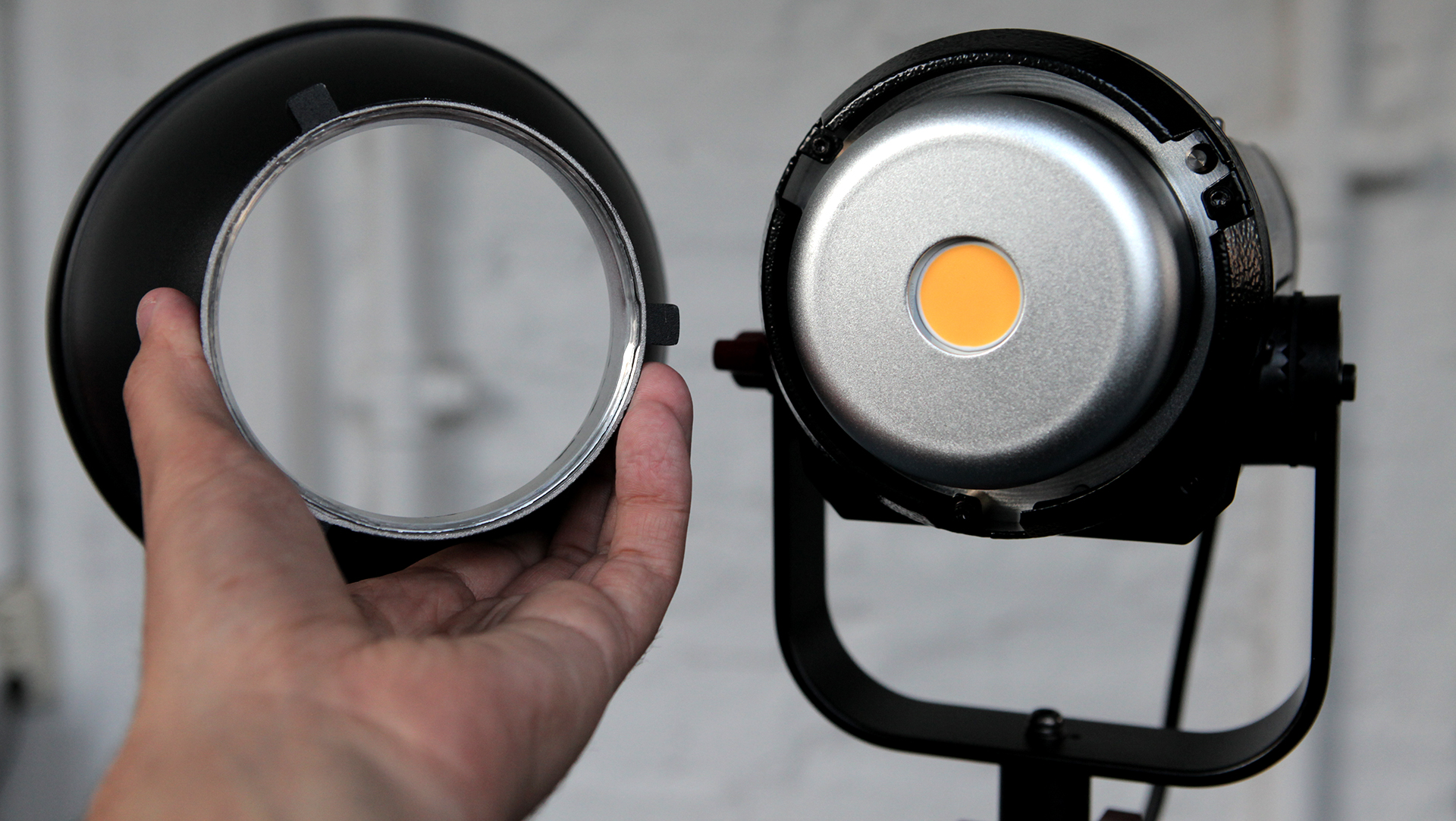 The LightStorm LS C120t is tungsten (3000K to be exact), which is a shame since it has become very common to have bi-color LED lights. Maybe the high CRI rating can be accounted for the lack of bi-color functionality but still, this is a real bummer. There will be a LS C120d (as in daylight) version in the future, though.

The integrated fan is really quiet! Even in “force mode” it’s barely audible. This might not seem like a big deal, but since a LED isn’t just a glowing bulb and there are quite a few bit of electronics involved, these parts tend to get hot. Other lights are much noisier, and one thing I don’t want on a quiet interview set is another source of noise! The integrated fan can be set to auto or force which will result in only 18dB of noise.

the wired remote acts as a V-Mount battery plate, too.

There’s a dedicated control panel that also acts as a V-mount (or Anton Bauer Gold mount) at the same time. You can set the brightness from 10% to 100%, control the fan mode and set the light to different channels. Up to 12 lights in 3 channels can be bundled together and be controlled via a wireless remote control. I don’t know if I would use the plasticky remote, but the battery plate/wired remote control is very handy, indeed. No need to bring down the light in order to adjust the brightness, just dangle the remote from the tripod and you’re all set.

The overall build quality seems to be pretty solid. Only high-quality connectors have been used and the metal housing of the main unit seems to be well built, too. The back handle and some of the front parts are made out of plastic, though, such as the knobs for mounting it on a tripod and the one for adjusting the angle. For some reason, the knob for mounting an umbrella is made out of aluminum… Why on earth?! The light itself plus the provided reflector (without cable and V-mount plate/remote) weights 1585g (3,49 lbs). 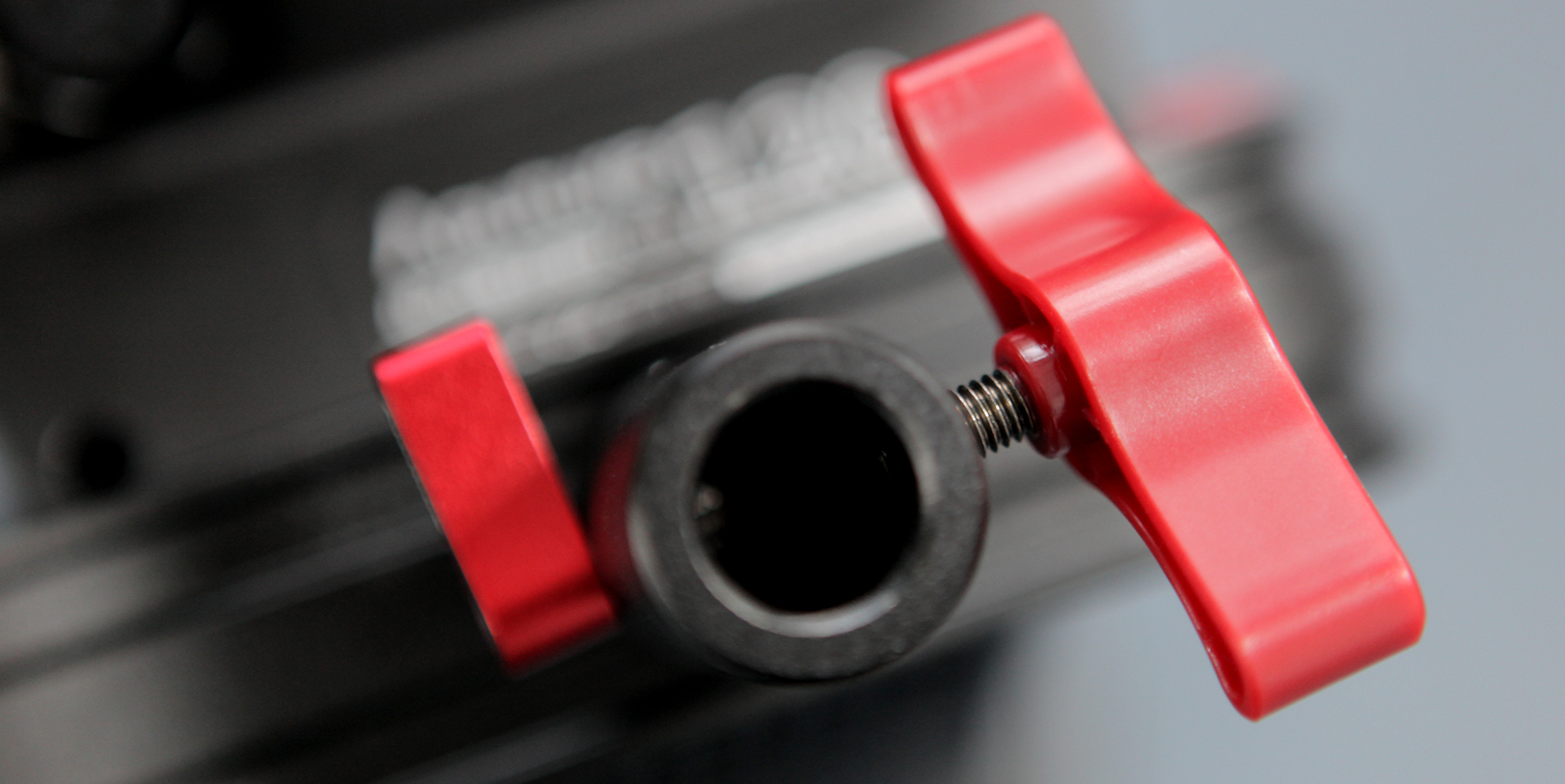 plastic knob for mounting the light on a tripod.

The integrated umbrella holder is nice to have. With it, you can create a big soft source the easy way. In terms of spill, I would of course prefer a proper softbox, but it’s a nice feature anyway.

What do you think? Could this be the replacement for your old-school tungsten lights? Let us know in the comments below. Make sure to read Sebastian’s summary of currently available LED soft lights, too!