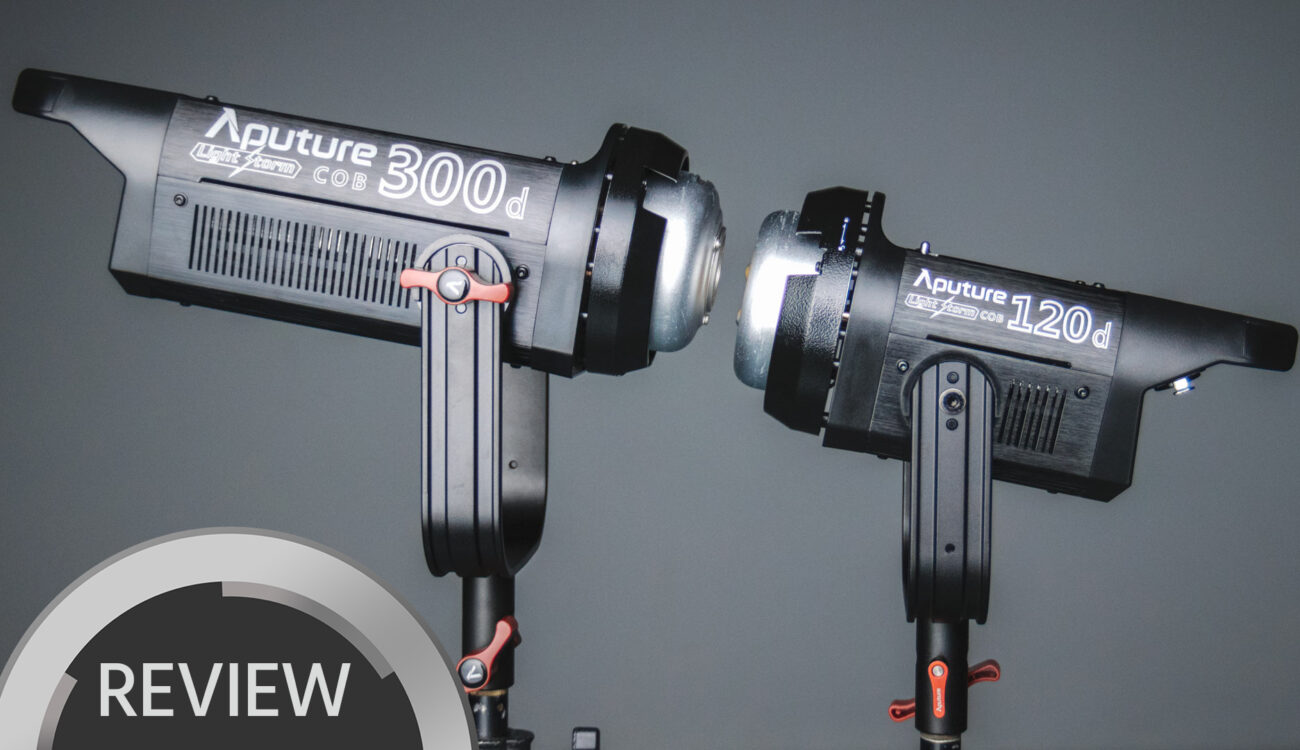 Aputure’s LS C300d has been one of the most anticipated new LED lights of the last year. With a strong output of 300 watts it is a significant update to their popular LS c120d, boosting more than twice the performance. In this LS C300d review we’ve taken a closer look at the maturing of Aputure’s LED lineup. 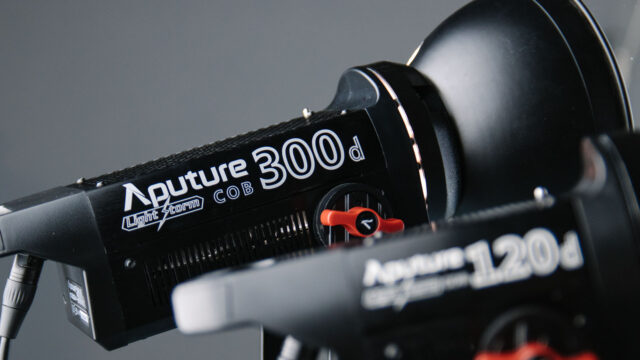 For those of our readers who are not familiar with the Aputure Light Storm c120d – a lot of filmmakers & photographers have been very excited about this LED light since it came out in 2016. It was one of the first ones with COB technology (single large LED source with strong output), that was targeted at professionals, offering low noise, great ergonomics and a high quality color rendition at a low price.

I personally used several Aputure c120d’s on a low budget film production last year, where we had no electricity on location and were able to use these lights with V-mount batteries on the go. This proved to be extremely valuable for our shoot, where the main camera (Alexa Mini) wasn’t a very lowlight sensitive camera. 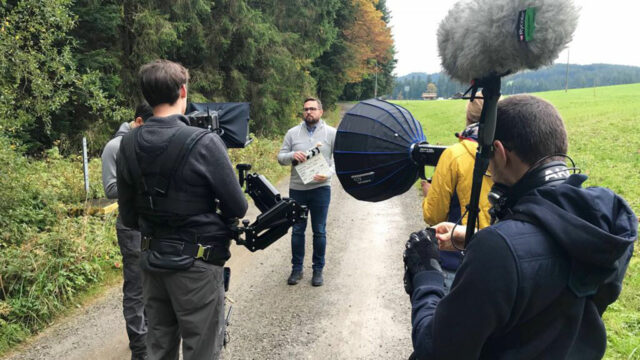 Using the Aputure LS c120d with a Westcott Beauty Dish in a forest.

The Aputure c120d was great, but it really lacked kick for many shooting scenarios and filmmakers were hoping for the next generation of LED. Fast forward to NAB 2017, when we were introduced to the Aputure Light Storm C300d, a stronger version of the c120d, that really left us impressed as it seemed to offer all the goodies. Let’s take a closer look in this C300d review: 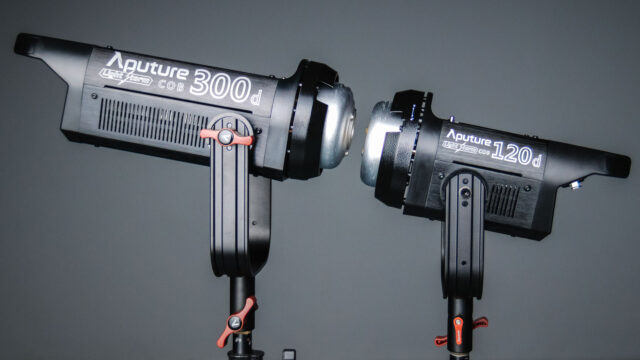 The Aputure LS C300d, as the name suggests, runs on 300 watts of power, whereas the c120d had 135 watts. Most other similar single-source LED lights currently run on wattages in the range between 100-300 watts. But now you may ask: Do you really need that much power?

Well, if you shoot anything else than closeup or portrait and especially for wider angles I would say: clearly yes. During our production, the c120d quite often did not offer enough output for our needs, especially when the light had been modified with a softbox.

The C300d on the other hand is certainly much more versatile in that sense. Whenever you have too much output, the control unit also offers a dimming functionality that lets you cut the light down to as little as 10%. As a nice bonus, there is a remote control in the package that allows you to dim the light remotely. 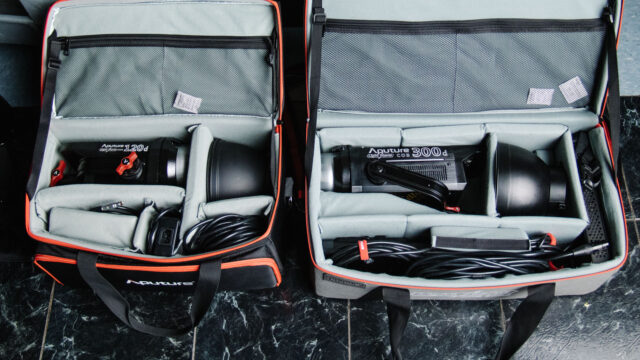 Of course, the C300d is bigger than the c120d and so is the package it comes in. All parts are neatly packed into a soft case which in total is also heavier than the C120 carry case by quite a bit. The light fixture itself doesn’t weigh significantly more than the smaller unit, but it comes with a lot of cables, transformers and other parts that are required to run the light.

In terms of output here is a side by side shot: 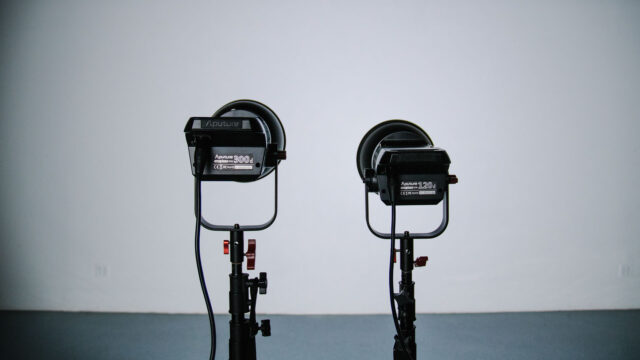 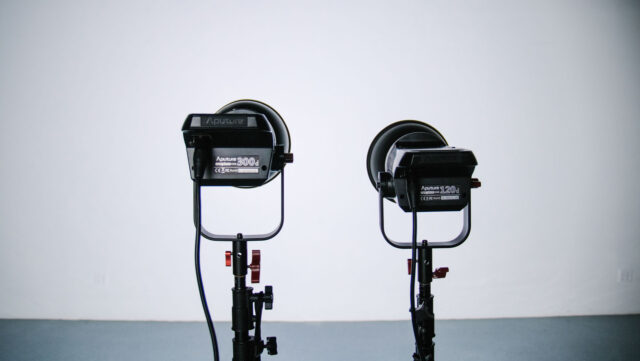 From a subjective view, having looked at both lights, I think the light intensity gain of the C300d over the 120 is equal to or maybe slightly more than 1 stop of light. The C300d itself is supposed to be equivalent to a 2K (2000 watts) tungsten light.

When compared to an actual 2K tungsten light, several other reviews suggest that the C300d falls a bit behind. Even though the C300d light output might be the same in theory, the way the light fixture is constructed probably doesn’t produce the same results at a distance. There is definitely a stronger light scatter right where the LED element sits – The falloff of these COB LED lights with their bowens mount design is greater when compared to an extended bulb on traditional lights. – After all this kind of design had initially been developed for photography, often used in combination with a softbox. Traditional film lights also have a parabolic mirror at the back that reduce the scatter of light rays and focus the beam. These LED Bowens mount lights have a very different design. 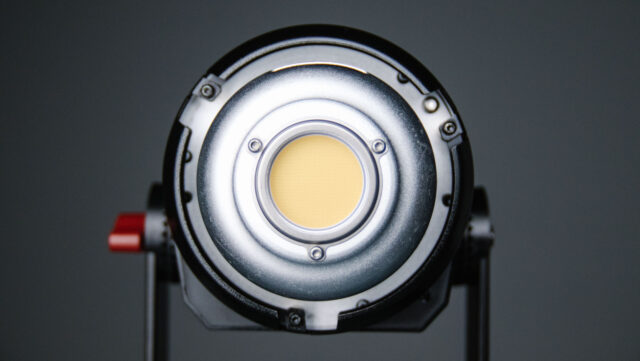 Another thing that made filmmakers happy about the c120d is its ergonomics. The head was lightweight, easy to setup and when connected to the control unit and power, it was very easy to control. The Aputure LS C300d works similarly and offers the same features, but if you’ve been working with a 120, unfortunately the 300 is a bit less convenient to setup and take down: 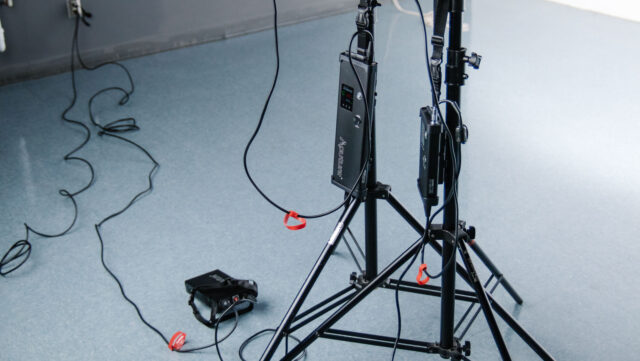 I am sure in the future manufacturers will combine at least one of the two parts into one or ideally put all the additional stuff into the light fixture itself, in order to cut down setup time. At the moment I’m just happy to get an affordable quality light with so much output, but in the future I would surely like to see the ergonomics improve. Aputure actually already did that for the c120d version, with the new Aputure LS c120d II, which combines ballast and control unit into one. 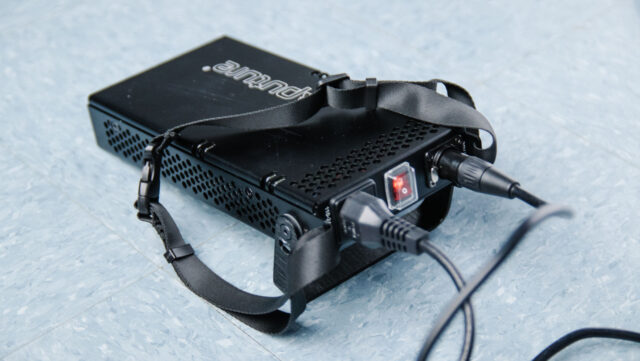 The power supply has a fan. It is wonderful that the light fixture itself is just as quiet as the c120d – on the C300d they used 2 fans instead of just 1 to achieve that -, but the power supply’s tiny fan makes quite some noise. It is audible in a quiet environment and might have to be moved away from the film set with additional 4-pin cables that don’t come with the package.

That said, if your action is not right next to the light, it probably won’t be audible in most cases, but I think it should still be pointed out in this C300d review. 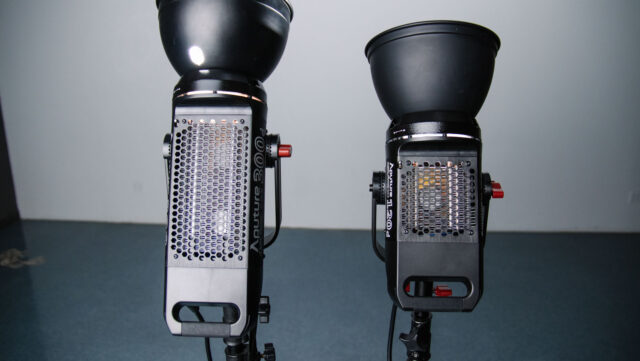 In terms of color, just like the LS c120d, the C300d has great color rendition, with a CRI rating of 95+. It is really wonderful to deal with this kind of light quality when compared to where LED’s were just a few years ago. This light will render skin nicely. Add to that, the fact that the C300d has a color temperature of 5500K, which is much more useful than the c120d’s 6000K (They fixed this on the LS c120d II as well). 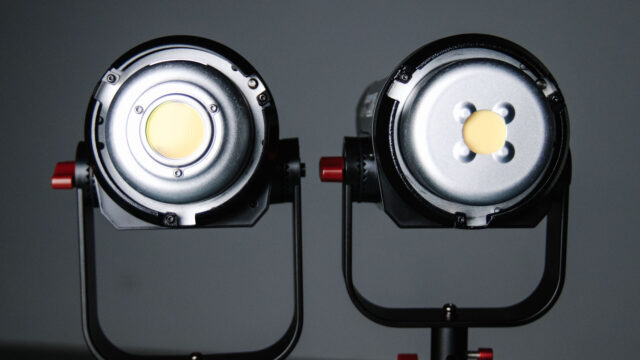 I do have one critique about color on the C300d: There is a strange yellow color spill on the side of the unit. It can be seen in the photo below. In rare cases this could be a problem, where the light is angled in a way, and the set is lit low key enough to actually create and see an unwanted spill. 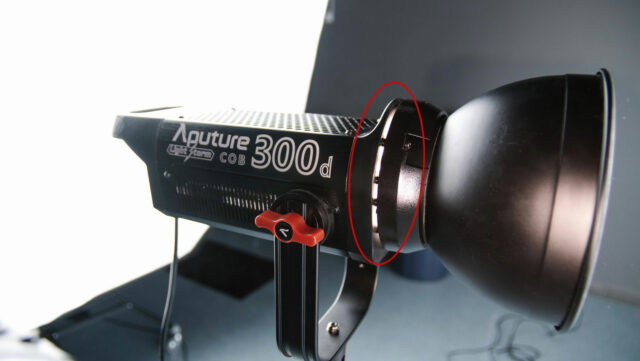 Yellow light spill through the gap on the side of the Aputure LS C300d. The orange light here also reflects back onto the front-side, because of a nearby bounce-card.

In this Aputure LS C300d review I had a few points of critique, however in conclusion the benefits of this LED light, at this point in time, certainly outweigh the shortcomings by a long shot. The C300d is a worthy step up in output over the popular c120d and as such an extremely useful addition to any filmmaker’s kit. The time has come where LED lights actually start to replace and overtake traditional film lights in some areas. Especially for people with low budgets and small crews this is great news and just another way to make more professional quality films with fewer resources. Aputure also offers several attachments, like a fresnel lens and other light shaping tools for these lights. Check them out here.

I can also see how LED technology still has a way to go. Even though it has been maturing tremendously since its introduction just a few years ago, there are certain things that are more professional and intentional about the construction of traditional film lights and LED light manufacturers still have to figure some of those things out. I am sure that slowly but continuously we will see this technology evolve further and there is certainly a bright future ahead for LED.

If you intend to light larger areas, wider angle shots with soft light, or simply need an LED with a strong output, then the C300d is certainly the one light to consider. There are few other manufacturers putting out similar lights, but for now the Aputure is definitely a safe bet. LED technology is evolving fast, but at a price of $1000 there is really not much to be sorry about with the Aputure Light Storm C300d. 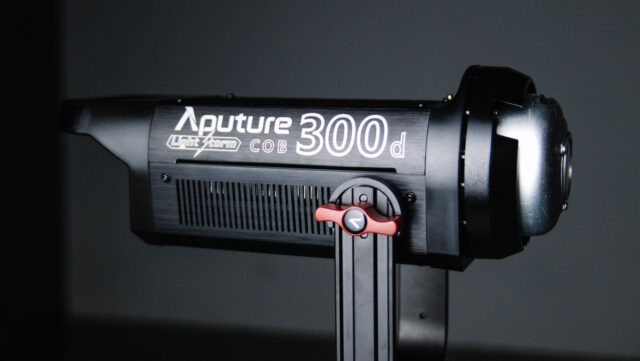