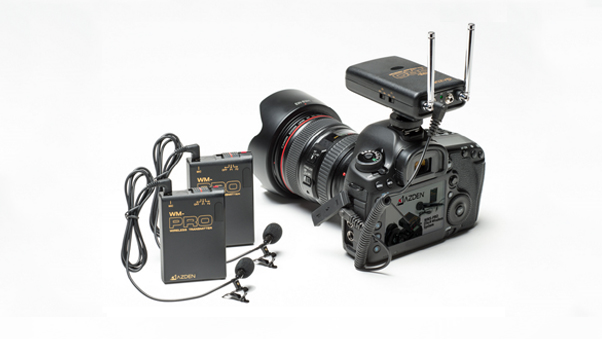 Azden has released a new line of wireless microphones that will enable you to receive transmit of two wireless lavalier microphones into one source. Designed with DSLR users in mind, both wireless mic packs send signal to a single hot shot mount receiver, outputting both microphones over a dual mono 3.5mm jack output.

The Azden WDL-PRO is a combo package, containing one receiver, two transmitters and two lavalier microphones. Each pack is compatible with two fixed frequencies (169.445MHz and 170.245MHz) simply assign one frequency to a respective wireless transmitter and you are good to go.

The Azden WDL-PRO is a dual mono package, meaning you’ll receive one mic signal per audio channel. Being designed primarily for DSLRs, the WDL-PRO ships with a 3.5mm cable for output, however for ‘more professional setups’ it does have the option of a dual XLR splitter.

Unfortunately, there is no way to independently adjust the audio levels. So if you are using the system in its native setup (with a DSLR), the volume adjustment on the camera will affect both channels of audio. Only when you split the signal (via their splitter) to an XLR compatible camera/recorder will you retain independent control over the channels.

Here are the specs for the WDL-PRO transmitters and receiver: I really like the design of this system, cutting down on receivers to the camera operating end and freeing up a channel for a boom mic/on-camera backup is a great solution. The lack of independent audio gain per transmitter, and limitation to only two frequency channels is a little prohibiting however (for selectable frequencies seek the more expensive Azden 330 series). It means you couldn’t use more than one of these packages in the same location, and you’d have to be careful with frequency conflict if you’re using other kit, or worse still, around others also using similar frequencies.

The price is accommodating to these lack of features however, a third cheaper than a single pair of Sennheiser G series packs. Available now from B&H.