The Canon M50 was recently announced, and I had a chance to review a pre-production version of it. Is Canon’s first attempt at a 4K mirrorless camera also the best vlogging camera out there? Let’s have a look.

I can’t stress this point enough before diving deep into the camera’s functions: this is a beginner’s camera and its price point (below $800 or €600) makes it a great deal compared to the competition. So, whenever I lament about a missing function, you should keep this in mind. It’s not an apples-to-apples comparison with the more expensive entry-level camera from Sony, the a6500, which is almost twice as expensive. 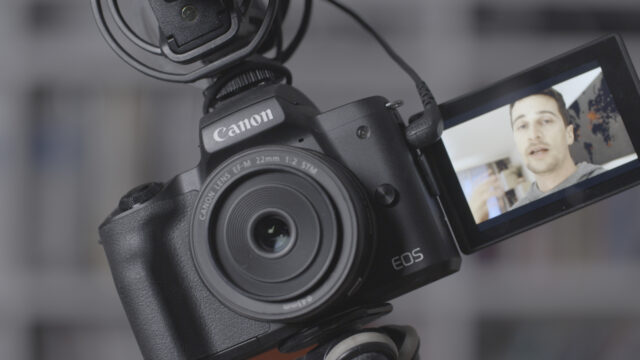 The Canon M50 has a tiny footprint, and is sturdily built around Canon’s EOS M lens mount. It is a smaller version of the EOS lens mount, and is also backwards-compatible but requires an adapter. The camera feels very sturdy despite its entry-level status and it feels like it can take a beating. It seems like Canon designed this as a “family camera” that can be in anyone’s hand from time to time. The flip-out screen makes it very convenient to use from every angle. It gives a lot of nice flexibility that its higher-end DSLR offerings are missing – lightness and the flexible screen, plus a decent viewfinder which can of course also be used for video. “Of course” because this is a mirrorless camera: on Canon’s DSLRs, the optical viewfinder becomes useless when you switch to the video modes because the mirror blocks your view.

The M50 has an APS-C-sized sensor, just like the Sony a6500. This means it has an approximately 1.6x crop compared to 35mm full frame. This is not a big concern for a camera at this price point, especially considering the fact that APS-C is pretty much the same size as Super35 sensors in high-end cinema cameras. It’s a decent size and certainly allows for professional filmmaking. However, the full sensor can only be used for photos or HD video recoding. As soon as you switch to the 4K (UHD) mode, the sensor crops A LOT more. We know this phenomenon from the Canon 5D Mark IV, and the reason behind it is probably a lack of processing power in the camera. In the case of the M50, the problem is that we end up with a 2.56x crop compared to full frame cameras. This is a MASSIVE crop factor. Everyone who knows the micro Four-Thirds crop factor of the Panasonic GH5, for example, knows what I am talking about – and that is only a crop factor of 2x. 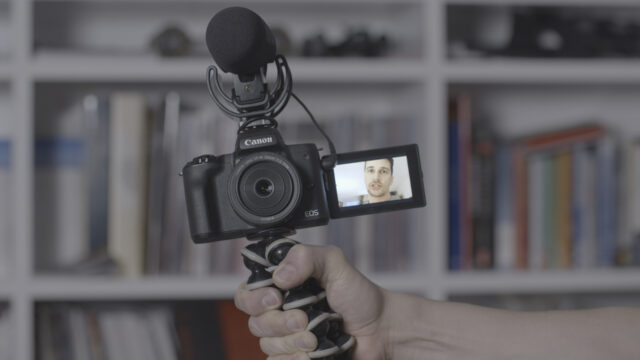 Canon has the best autofocus on the market – its Dual Pixel Autofocus – which is a big plus over all the other manufacturers. It also works brilliantly for video, when most of the competitors fall short on good autofocus for video (with the notable exception of the Sony a7R II and subsequent cameras). HOWEVER, for some reason, the 4K mode of the M50 cannot make use of the Dual Pixel Autofocus, having to rely instead on a rather bad version of contrast-based autofocus. And apart from a massive crop and a bad autofocus, the 4K mode of the camera suffers badly from rolling shutter, which is just as bad as in Sony’s a6500 entry-level competitor.

The Canon M50 has slow-motion functionality built in, meaning you can shoot at 100 fps (in PAL) or 120 fps (in NTSC) and immediately play it back at 25 fps (or 30 fps) to see the slow motion effect. However, this mode is only 720p and also suffers from heavy aliasing. It looks like Canon footage from a 5D Mark II when recording like this. There is a 1080p 50fps mode for normal recording, so this could be slowed down to a 2x slow motion in post production. There is no higher frame rate mode in 4K. 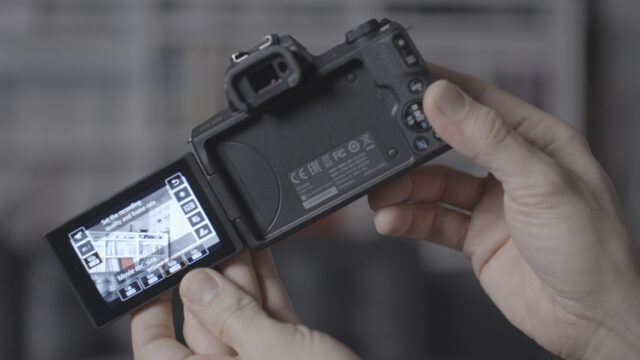 The Canon M50 has no further special picture profiles optimised for filming: there still is no C-log, so existing picture profiles need to be modified to get a higher latitude in post production. For the test shots in my review, I usually went with a a neutral picture profile. The camera has no further video functions like peaking or zebras, which we have come to expect from video-capable cameras. The digital stabiliser in the camera is quite good and makes it possible to use this camera handheld quite easily, especially of course if compared to an optically stabilised lens. An in-body stabiliser of the camera would have been nice but it would also have increased the size of the camera.

This is never our main focus, but of course this is predominantly a photo camera, and it comes with the new Canon CR3 raw format that, at the moment of writing, is not yet supported by any photo editing software I know. The JPEGs from these RAWs looks great though for a camera of this size.

The Canon M50 is a nice, powerful and affordable little entry-level camera for people who want an interchangeable lens camera without having to schlepp around a huge amount of kit. The video function is very good mainly because of the incredible Dual Pixel Autofocus in HD, but the 4K is clearly an afterthought and can’t really be used in practice much because of the crop and the lacking Dual-Pixel AF. The main purpose of this camera will be uncomplicated family shots or vlogging, for both of which HD is enough. It can be used for entry-level filmmakers who want to start working with interchangeable lenses, as long as they are happy with a 1080p output.

What are your thoughts on Canon’s first 4K mirrorless camera? Will you consider getting it to do some work? Share your opinion with us in the comment section below.