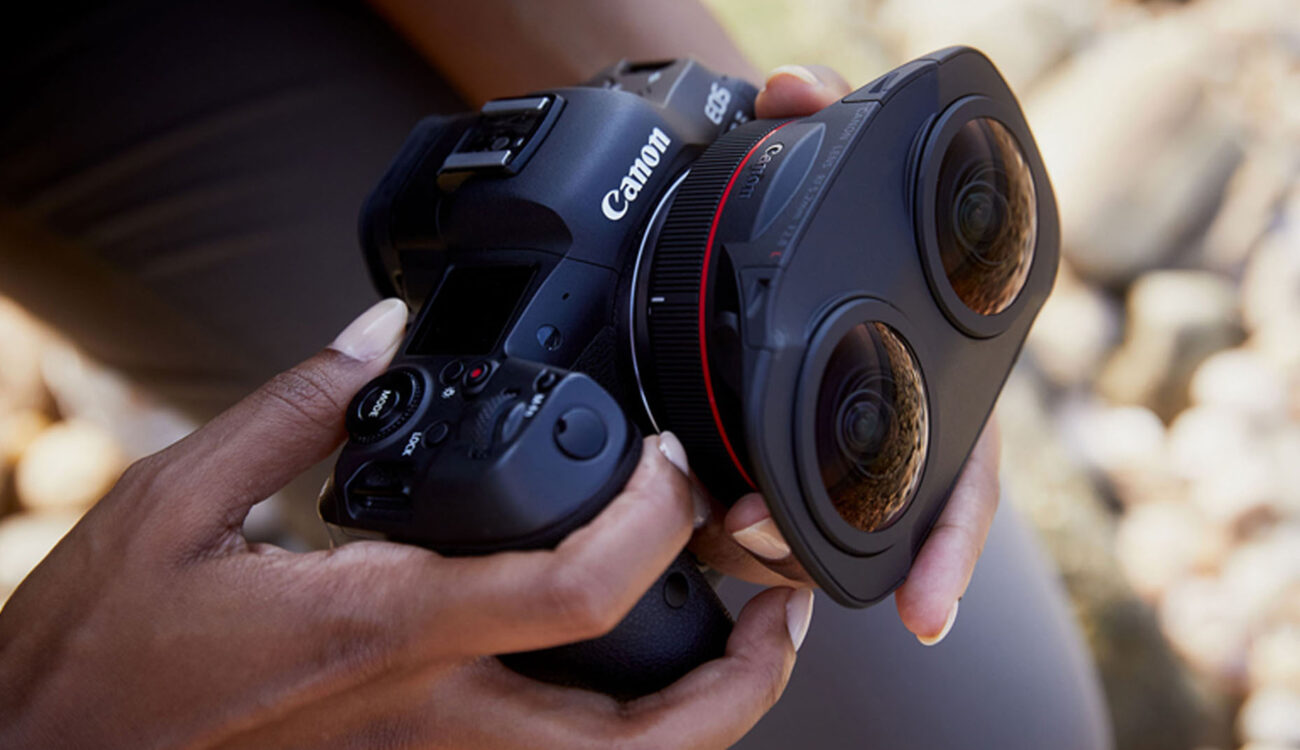 Canon has just announced a new lens for Canon RF cameras, and especially the Canon EOS R5: the Canon RF 5.2mm F/2.8L Dual Fisheye 3D VR. As its name suggests, this unique lens allows you to shoot stereoscopic 3D virtual reality (VR) content. Along with the lens, a firmware update for the EOS R5 and plug-in for Adobe Premiere Pro will be released to make shooting VR content a breeze!

Canon has been on fire lately! Indeed, it’s been less than a month since the release of the Canon EOS R3 with impressive specifications and the new Canon RF 16mm F/2.8 STM, and RF 100-400mm F/5.6-8 IS USM lenses.

Indeed, this lens will “print” two fisheye images on the same sensor, so you’ll need the extra resolution (8K video recording, for example) of the EOS R5 to get the best out of this stereoscopic lens.

The Canon RF 5.2mm F/2.8L Dual Fisheye 3D VR lens is engineered with an interpupillary distance of 60mm for delivery of 3D imagery in VR with natural parallax closely resembling human vision when viewed through a compatible headset.

When captured imagery is viewed on compatible head mount displays such as the Oculus Quest 2 and more, a viewer can feel like they are a part of the story that you create.

Each of the left and right fisheye lenses has its own optical system, including separate but coordinated aperture mechanisms. Together they seamlessly and simultaneously control the exposure of both lenses.

This lens is a manual focus lens, with a minimum focusing distance of 0.2m/7.87″. In addition, the focus of both the left and right lenses is adjusted simultaneously. There is a left/right difference adjustment dial in case you need it.

The design of the RF 5.2mm F/2.8L makes it close to impossible to attach front filters. However, you’ll find a built-in gelatin filter holder at the rear of the lens.

The EOS VR Utility will convert your pictures/footage from dual fisheye images to an equirectangular image and allow you to change the resolution/file format before export.

The EOS VR plug-in for Adobe Premiere will convert your footage and edits to a “regular” equirectangular image so you can edit your pictures like you’re used to.

The EOS VR Utility and EOS VR Plug-in for Adobe Premiere Pro should also be available simultaneously, but you’ll need to pay an undisclosed monthly/yearly fee. A free trial to process still images and some video clips for free inside the EOS VR Utility.

What do you think about this new Canon VR lens and ecosystem? Did you already shoot VR content? Don’t hesitate to let us know in the comments down below!