Canon today announced a new cinema camera with APS-C (Super35) sensor – the EOS C300 Mark III. Along with the camera, they also announced a new 25-250mm CINE-SERVO lens and some firmware updates, which we covered in a separate article – available here. The EOS C300 Mark III features a new 4K CMOS DGO (Dual Gain Output) sensor, modular design and the ability to record in multiple formats up to 4K 120fps in Cinema RAW Light. 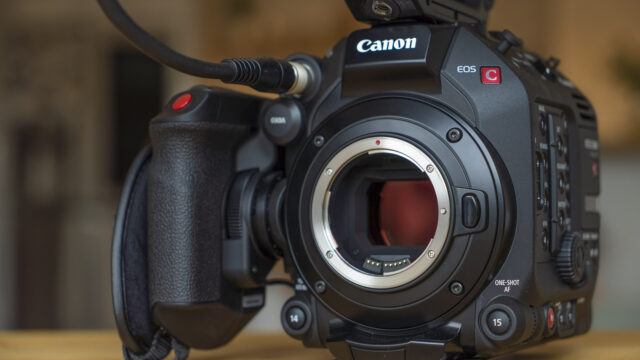 The new EOS C300 Mark III is Canon’s new flagship in the Super35 line-up. Before talking about the new camera, I would like to give you a little overview of Canon’s EOS Cinema line.

While many filmmakers were bashing video capabilities of Canon’s DSLR and mirrorless line-up in recent years, there was not much to complain about its EOS C line of cameras. I think this is where Canon remains fairly strong.

When Canon announced the full-frame EOS C500 Mark II last year, specs-wise it kind of looked like a C700 in a much smaller body, better suited for single camera operators, and with a much friendlier price tag. To refresh your memory about the camera, make sure to check our C500 Mark II coverage:

Canon C300 Mark II was announced in April 2015. At the time of its announcement, five years ago, Canon was asking $15.990 for the camera. Over the years, it got very popular, especially among documentary filmmakers. Many would say the camera became kind of an industry standard for 4K film productions (next to the Sony FS7).

Five years is a relatively long time in the camera world, but the EOS C300 Mark II is still being used widely in the industry in 2020. The camera received a few price drops as well – today, a new C300 Mark II sells for $8.999. This price might now even drop a bit more after today’s announcement. Let’s take a look at the new EOS C300 Mark III and its features and specs. 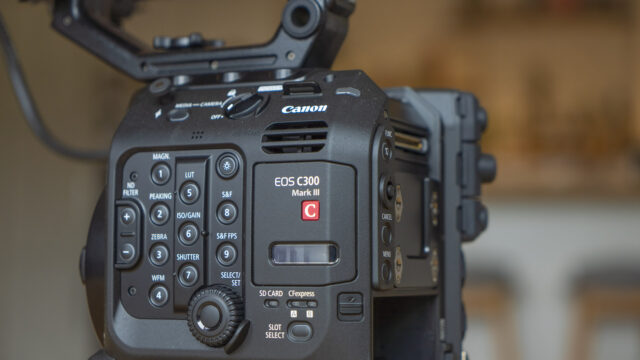 When combined, at pixel-level accuracy, the details and the qualities on the highlight and low light areas of the image are maintained and enhanced. According to Canon, the new sensor should be able to achieve 16+ stops of dynamic range. We will, of course, test this in our lab.

The DGO technology works at every ISO level and it should help in reducing the noise in higher ISO values and improve therefore the camera’s lowlight capability. It works, however, only up to 60fps – there is no DGO for higher framerates.

The good news is that the DGO sensor is also compatible with Canon’s Dual Pixel CMOS Autofocus, which is so popular among filmmakers for its reliability. The Dual Pixel AF works in every framerate, every resolution, and regardless of used codec. The only limitation is when a lens is stopped down to around f/13 – then the Dual Pixel AF does not have enough contrast to work reliably. 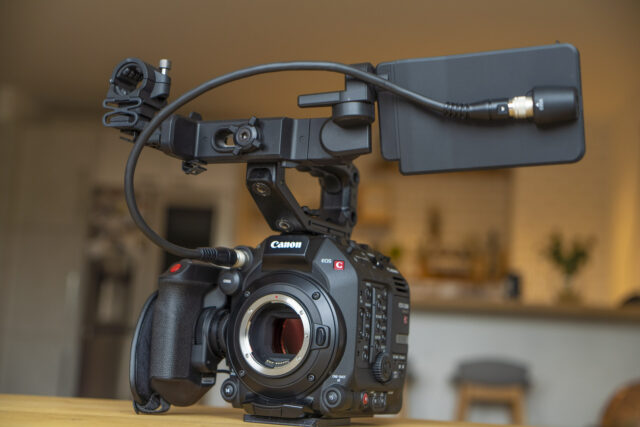 Canon introduced the new way of autofocus with the C500 Mark II, where the autofocus emulates the way how focus puller would work. The autofocus starts refocusing quickly and then slow it down before the focus is achieved. This is now also included in the C300 Mark III.

The camera also offers the Dual Pixel Manual Focus Guide that can tell users which way to turn the lens. This also works for instance with the Canon Cine Prime lenses. 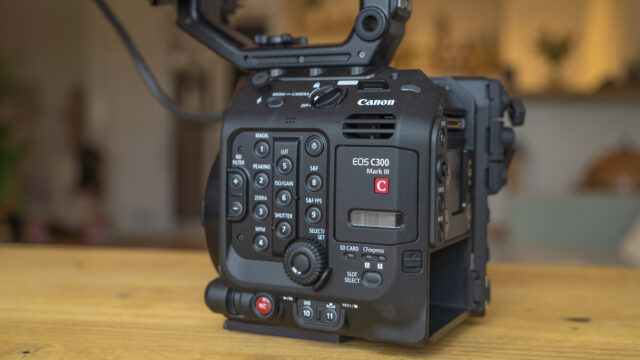 For non-RAW recording in XF-AVC, users can select ALL-I or Long GOP to film with high compression for efficient workflow and longer recording times. When recording 2K or Full HD in Super 35mm, footage boasts the 4K sensor’s full capabilities. This recording is downsampled internally to record the footage at the resolution selected by the user – no cropping of the sensor. In 2K with Super 16mm crop, the framerate can g up to 180fps. 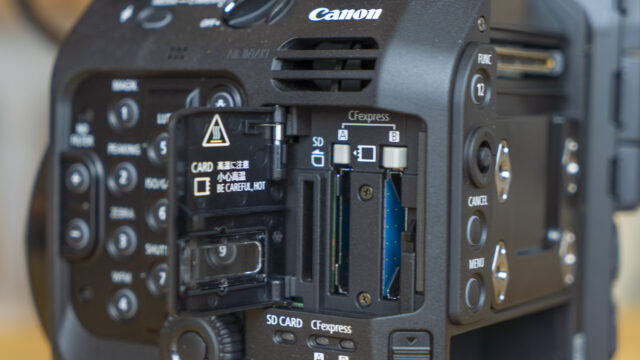 The EOS C300 Mark III features a configurable design – similar to that of the EOS C500 Mark II. There are two different optional Expansion Units for the camera (EU-V1 and EU-V2). They both fit on the C500 Mark II as well and they add extra connection terminals to the camera body and expand the camera’s compatibility with various styles of shooting.

Additionally, the lens mount can be changed between EF, PL and EF Cinema Lock mounts without the need to send the camera to an Authorised Service Centre. That certainly provides additional flexibility.

Canon EOS C300 Mark III will be available approximately by the end of June 2020. The price for the body-only has been set to around $10,000/€10.000 (without VAT), which is significantly less than the starting price of the C300 Mark II five years ago.

Are you using Canon EOS C300 Mark II for your work? What do you think of its successor? Did you expect the camera to have these features? Let us know in the comments underneath the article.