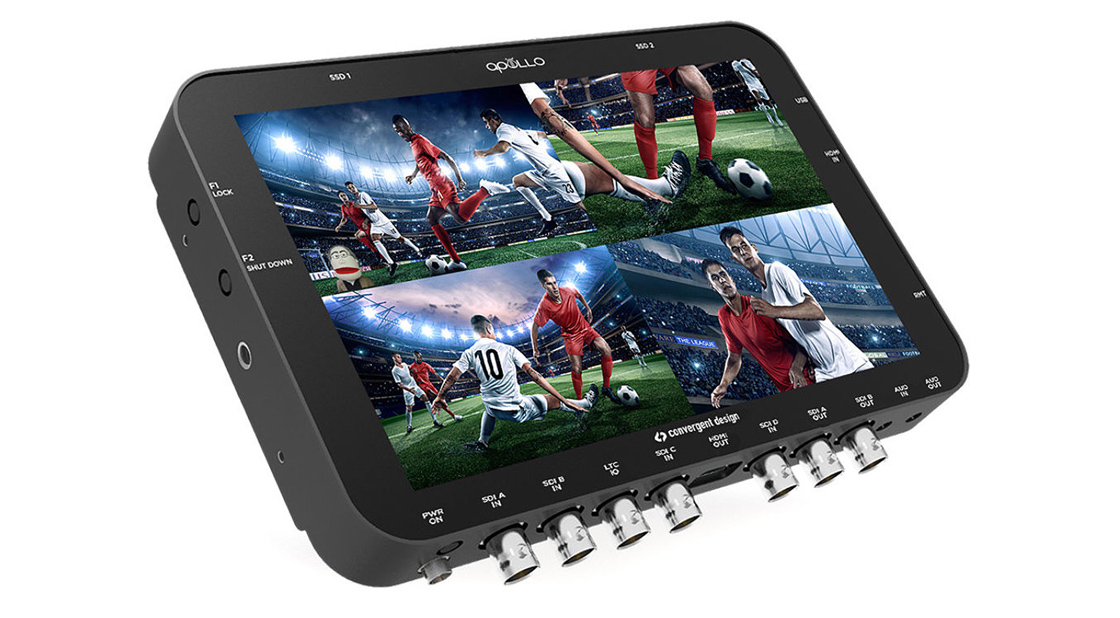 Convergent Design has announced an interesting new recorder that offers a very compact solution to multicam recording workflows. The Apollo takes the same form factor as the popular Odyssey 7Q and 7Q+, offering up to 4 channels of recording from 4 separate sources, with a final 5th channel as a multicam TX or quad recording. 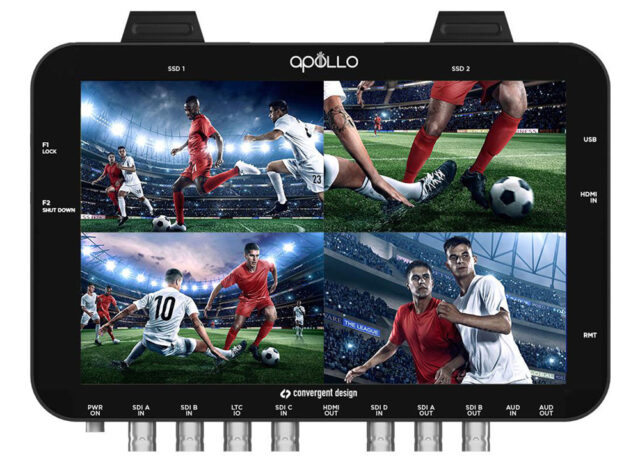 This will condense a lot of multicam users hardware. The Apollo is a switcher, ISO and TX recorder; it has the ability to record up to 4 ISO (isolated camera) channels, switch between the 4 as well as recording to a final channel TX (transmission record) or a quad-split reference view.

You’d be forgiven for mistaking it for the Odyssey 7Q/7Q+ recorder, the Apollo uses a similar 7.7″ OLED touchscreen display, dual proprietary SSDs and a host of camcorder battery plates as well as an AC adaptor; all these features contribute to keeping the form factor small and compact.

Here’s from the Convergent Design press release, bold highlights by me:

“Field producers can take it on location, record from any four HD cameras, view a quad-split playback on the way home and drop all four cameras in perfect sync into a single timeline to dive immediately into an edit.

Reality programs shot in cramped cars with tiny cameras can slip Apollo in the glove box or under a seat. A concert performance can be captured by recording four camera ISOs along with recording a Line Cut that can also be sent to a large live display at the venue.

Live-streamed events can be covered with four-camera switching without having to bring in a large flypack. Apollo can also be used as a secondary recorder/monitor; using our battery & wireless video receiver bracket makes for a great handheld Director’s Monitor.

And Apollo’s advanced built-in Image Analysis tools can be used to match the cameras during setup. Apollo addresses many modern multicamera field production needs in a single 1” thick device.”

Good new for Odyssey 7Q/7Q+ owners also, around the same time of release you’ll be able to pay for an upgrade that will enable you 7Q/7Q+ recorders to have the same multicam features of the Apollo.

Doing a lot of work in Live Events in the past I can see great use of the Convergent Design Apollo in multicam scenarios.  It maybe considered one of those nervy steps where you’re putting all your faith in one piece of hardware (ISO, TX and switcher). However you usually always have in-camera recording too that can serve as your backup; the Apollo has a feature enabled where it will keep recording other channels even if one drops out.

Post work time can be reduced. Not only will you be supplied with a ProRes TX recording but also a multicam sequence synced and ready for editing can be supplied via an XML EDL file.

I question its use as a functional mixer; cutting critically between shots is never ideal as a touchscreen interface. Not a lot of information is in the press release discussing this feature, however a second quarter 2016 update brings a “Remote keyboard control pad” which I hope is a form of hardware that links to the Apollo to offer physical buttons for mixing.

Speaking of future updates, the Apollo will be 4K enabled up to 2 channels of recording early next year, as well Avid DNxHD support and Cascade Interconnect, linking up to 3 Apollos for 12 channel HD/6 channel 4K workflows.

Specifications for the Convergent Design Apollo

The Convergent Design Apollo should start shipping December this year. The manufacturer’s list price is $3995, which includes an SSD to USB3 adapter, 5-pack of SSD mounting handles and a universal AC power supply. Owners of the Convergent Design Odyssey 7Q and 7Q+ will be able to purchase an Apollo Option for their devices as an upgrade for $1795.