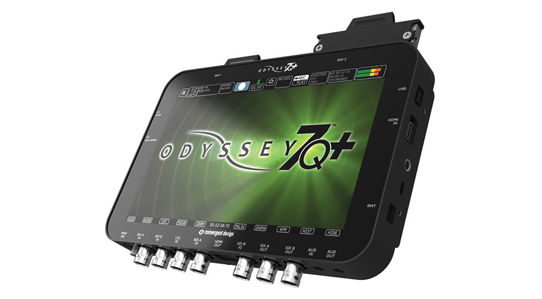 Convergent Design has released a recorder that will compete nicely with the Atomos Shogun. The Odyssey 7Q+ is a 4K raw recorder, with the addition of a HDMI input for direct compatibly with cameras like the Panasonic GH4 and Sony A7S.

The Odyssey 7Q is a compact solution combining advanced recording abilities over SDI with a 7.7″ OLED screen for monitoring. The Odyssey 7Q+ offers exactly this, but with a HDMI input also.

Check out the below video released by Convergent Design discussing the wide capability of Odyssey 7Q+.

The down conversion of a signal is a nice touch; on smaller budget shoots sometimes not every component is 4K compatible. Having the ability to record in 4K but output FullHD will help in these workflows, a perfect example of this is displayed in the above video where you want to record drone footage in 4K, but send a wireless signal in 1920X1080.

The ability to apply LUTs to your image whilst recording in raw/log is great; not everyone on set will know how to determine a log image, having the ability to supply an image in the ballpark of a finished result is much more pleasing to clients. The Odyssey 7Q+ has the ability to record 4K images up to 60p, and 2K images up to 120p. The purchase of the device includes ProRes capture of up to 30p in 4K, and 60P 2k/1080. The former mentioned higher frame rates are unlocked with an additional software purchase/hire.

This is worth noting with the 7Q+, like all Odyssey recorders only certain features are included in the initial purchase, this along with proprietary media can significantly add to the overall cost of your package, so factor this into your purchase. Here is a list of the included features and available paid upgrades:

Record Options for Purchase or Rental

The Odyssey 7Q+ is available for pre-order now, and is likely to ship before the end of the year. At $2295.00 it is more or less in the ballpark of the Atomos Shogun. Although as stated earlier, media and additional firmware support will significantly up the price (albeit with more peripherals, so pick the package that suits you best).