Cooke announced five new cinema prime lenses recently – four spherical and one anamorphic. Our colleague Graham talked with Les Zellan, Chairman of Cooke Optics, and aside from the new lenses, Les told us some interesting information about Cooke /i Technology and the unique Cooke Look.

For this year’s NAB which never happened, Cooke introduced five new lenses – four spherical and one anamorphic. The new spherical lenses include: 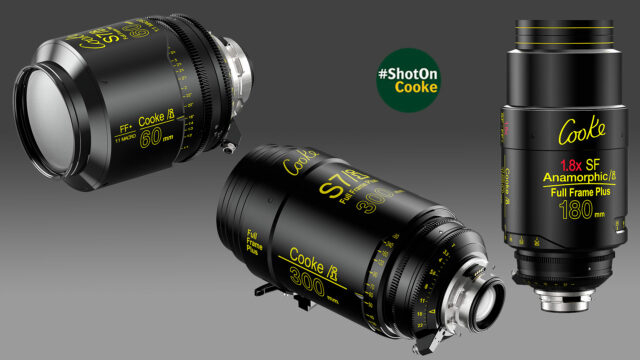 The Cooke /i is a metadata system that the company introduced already 20 years ago. It collects focus, Depth of Field, and IRIS information from the lens and sends them to the camera via pins in the lens mount. In its second generation, the system could help with tracking objects and in the third generation, Cooke added accurate distortion data for spherical prime lenses. They are now adding this information to anamorphic lenses as well. More information about the Cooke/i Technology can be found here on Cooke’s website.

The next interesting thing Les Zellan told us, is that one of the world’s most popular animation studios – Pixar – is using Cooke look in their movies by “shooting with virtual Cooke lenses.” And they have been doing it for a while already. With Toy Story, they mimicked the look of Cooke Super 35 Anamorphic lenses while for some more recent movies they mimicked the look of Cooke Full-Frame Anamorphic lenses.

Cooke’s lenses have always been a synonym for premium high-end cinema productions. Their lineup is mostly aimed at rental houses as the cost of a Cooke lens set usually is well beyond what a camera owner/operator can afford. The most affordable line of cinema prime lenses that the company offers is the Cooke Mini S4 (at around $7,300 per piece). Les told us that Cooke is not planning on releasing a more affordable line of lenses. Unlike some of their competitors, they will not go the path of rehousing stills lenses.

According to Les, the Cooke look is a set of specifications that gives their optical designers a box to work in. They have to find the new design within those parameters so that the lens has that unique look. If you want to examine the unique “Cooke Look”, you can check out “Shot on Cooke” which is a kind of online library showcasing videos shot on Cooke lenses. There are also lots of useful technical information with each video.

Do you have experience shooting with Cooke lenses? Do you like the Cooke Look? Let us know in the comments underneath the article.