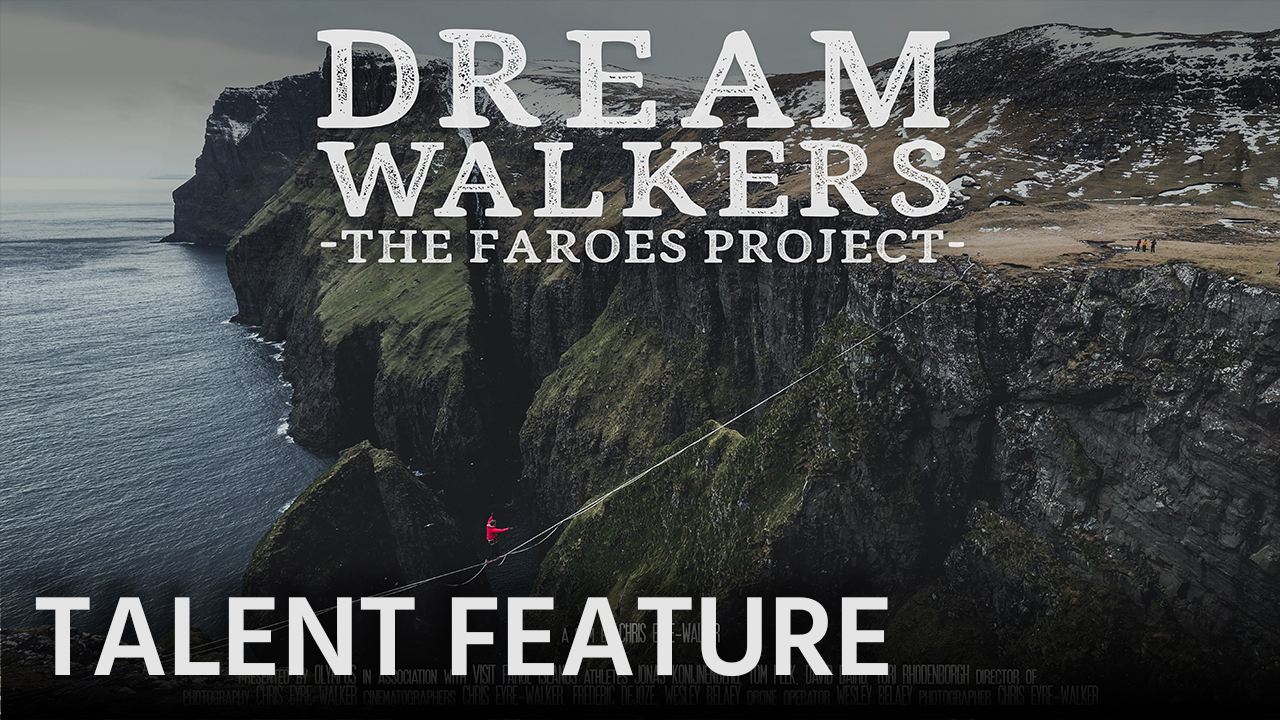 My name is Chris Eyre-Walker, and I’m an outdoor & adventure filmmaker and photographer, and an Olympus Visionary. Originally from Belgium, I ended up in Australia in 2012 from where I’ve been following my dream of becoming a photographer and filmmaker, tell stories and – most importantly – go on epic adventures. I recently shot the film DREAMWALKERS – The Faroes Project, the journey of four friends who set out on an adventure to be the first to highline one of the most unlikely of places: the Faroe Islands.

In 2015 I had the chance to intern for California-based photographer Chris Burkard, and ever since then I’ve been on the move from country to country, from project to project – from shooting surf at Teahupoo in Tahiti to, more recently, attempting a 7000m mountain in Kyrgyzstan. My life’s been a rollercoaster and it’s been one hell of a ride so far!

In 2016 I met up with a friend from Australia and we spent a weekend shooting highlining in Belgium. One thing lead to another and we were soon planning our Faroe Islands adventure. He told me that he and three friends wanted to be the first to highline the Faroes. With my past travel experience and love for this country, I happily joined in on the adventure and decided to create my first real adventure film.

Seven months and a hell of a lot of planning later, and we were on our way.

Currently based in: Sydney, Australia. 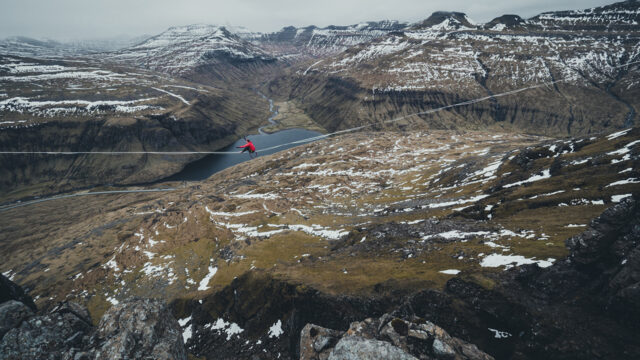 How did you get started in our industry? For me it was a slow move from photography to filmmaking. It still is, actually. I was fascinated by the idea of telling a more complete visual story and sharing my adventures behind the scenes as a photographer. Slowly but surely I’ve been working on my cinematography and storytelling skills, all the while sharing my adventures around the world as a photographer in a series called Adventure Photography On Location on my YouTube channel.

Current assignments: I’m currently travelling in Central Asia for a few months mostly for personal work, but I just came back from a three-week assignment from Lenin Peak (7134m) in Kyrgyzstan for Olympus Australia. The idea was to see how well their cameras would perform at that extreme altitude and demonstrate the capabilities and advantages of a mirrorless m4/3 system for expeditions where weight and size are of vital importance.
Unfortunately, we didn’t quite make the peak. At 6500m we had to turn back due to the weather and one member of the expedition no longer feeling his toes. We were experiencing -30ºC and gusts of wind of up to 30-35km/h. While we suffered in these conditions, it was a positive surprise to see that my Olympus E-M1 Mark IIs seemed to not even be bothered by the extreme environment, so I think it’s safe to say that this is the camera for the job!

What types of productions do you mostly shoot?  Most of my work is for my own YouTube channel. I’d say it’s a mix between run-n-gun documentary and educational style, with the occasional video for Olympus.

What is your dream assignment / job in our industry, and what are you really passionate about? To be honest, I’ve never really thought too much about that. I suppose my dream is to become the best at what I love doing, have the chance to work with others in the industry and hopefully be involved in projects I can’t even think of at this stage.
There’s nothing more inspiring than good collaboration with other creatives and athletes who are the best at what they do! 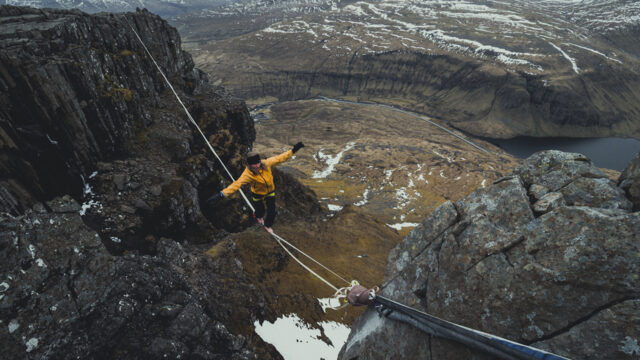 Personally, I’m more and more drawn to adventure documentary style. I love being close up and right in the action. Working with athletes pushing their limits all the while pushing my very own is when I feel like I’m doing something worthwhile.
The stories we create and tell while going beyond our limits are the ones we’ll remember for the rest of our lives. It’s those stories I love to tell.

In the work that you are presenting us, now that it is done, what would you have done differently throughout the production? More sleep! Haha. I guess that would never really happen in any version of this project, that’s just how these adventure projects go. But my average sleep for the two weeks in the Faroe Islands was around 5h per night. Not bad… unless you’re spending the other 19 hours of the day in the rain, snow, hail and winds of the Faroe Islands. But we made it in the end!

But honestly, this project went exceptionally well and I believe that’s a result of the 7 months of planning, passion and involvement of everyone on the team. 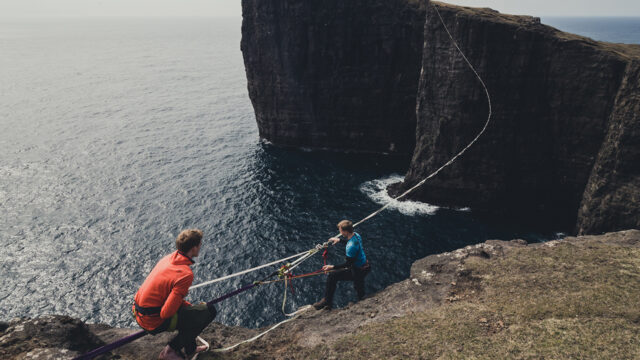 You chose to shoot your project with the Olympus OM-D E-M1 Mark II. Can you please describe why you chose to use it, what was your workflow, were you happy with the results and will you ever go that way again? As a photographer, I’ve been using Olympus cameras for the past three and a half years, with weight and size being the biggest factor for me as a travelling creator. I spend around 9-12 months each year on the road, and so does my camera equipment! And naturally, I also shoot my video work with these cameras.

The one thing that Olympus has over any other camera out there is the next-level sensor stabilisation. It’s unbelievably good! There have been many times when I’ve taken a tripod or gimbal with me and just left it in the bag because this camera does it all in-body.

Out of all the shots in the DREAMWALKERS adventure film, we shot about 3% on a tripod. The rest was handheld with a mix of the occasional gimbal shot for faster camera movements.

The smaller the gear and the simpler the setup, the more I can focus on my subject and the story. I intended this film to be a documentary of the adventure of 4 friends who attempt to be the first to highline the Faroe Islands. The cameras were just telling the most visually-pleasing and beautifully-looking version of this adventure. I never wanted the gear to get in the way – and the E-M1 Mark II is exactly the right tool for this kind of job.

It’s easy to use, super weather-resistant and with the sensor’s digital and lens stabilisation (with certain lenses) you have a setup that can work in any environment, no matter how extreme the conditions.

What’s your favourite lighting equipment and why did you choose that kit over other solutions? I shoot 99% run-n-gun, documentary-style in the outdoors, so I don’t really use any lights except available, natural light.

Do you use drones or gimbals in your productions? If so, what is the most effective way you’ve found to deploy them? For DREAMWALKERS we used a DJI inspire 1 PRO. It allowed me to control the camera separately from the drone itself and therefore achieve the shots I had in mind. I got lucky: my pilot was world class and the communication between us was perfect. He constantly read my mind and knew exactly what kind of shot I was after and what path the drone had to take in order to achieve it.

The biggest challenge for this project was always going to be the wind. The Faroes get winds of up to 190km/h – not exactly ideal conditions for a highlining project, or for flying a drone for that matter. The possibility of highlining and the ability to fly a drone were pretty much intertwined: if the winds were good for highlining, we could usually also fly the drone.

For the occasional gimbal shots, we used a Zhiyun Tech Crane gimbal. Small, light and easy to use, it does the job and fits right in with my shooting style. I was quite impressed with the battery power on these things! You can almost shoot a whole day with one set of the provided, rechargeable batteries!

What editing systems do you use? I edited the entire project on my 2017 MacBook Pro. With around 4000 clips, I went through the process of creating low-resolution ProRes proxy files which I stored on an SSD. With the Thunderbolt 3.1 connection on the MacBook, the whole project went buttery smooth and fast to edit using Premiere Pro CC 2017.

How much of your work do you shoot in Log and what is your preferred way of colour correcting? I shot most of this project on a flat profile similar to Log. Since we were going for a muted, atmospheric look for the film, the grading was very subtle and desaturated, and the flat profile was a perfect starting point.

I graded most of the film directly within Premiere Pro. However, as a photographer I feel a lot more comfortable inside Lightroom when it comes to colours, so for some of the footage, I extracted screenshots and imported them into Lightroom to get the colours and look just right. I then exported each screenshot as a LUT and applied these to the scenes in Premiere Pro. Not a very efficient process, but definitely worth it to me.

How frequently do you travel, and do you have any tips when it comes to packing your gear? Like I mentioned, I spend 9 to 12 months per year on the road. Everything I need is with me at all times.

While I try to pack light, it’s almost impossible to be a full time, lightweight filmmaker / photographer while on the road. New airport regulations around batteries and the carry-on limitations are a real pain, but I’ve been lucky so far!

My one tip would be to split up your hard drives. Check the backup, carry-on the original version and, if possible, have a cloud backup too. I also try to keep my vital stuff on a 3rd SSD, which is much more secure when it comes to getting dropped or bashed around.

If you want to see more from Chris Eyre-Walker, head over to his website. 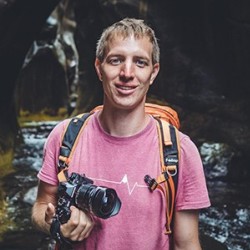 Chris Eyre-Walker is a 27 year old adventure, outdoor and travel photographer from Belgium based in Sydney – Australia. He’s a passionate traveller and his work spans from underwater surf photography to the adventures of extreme sport athletes high up in the mountains.