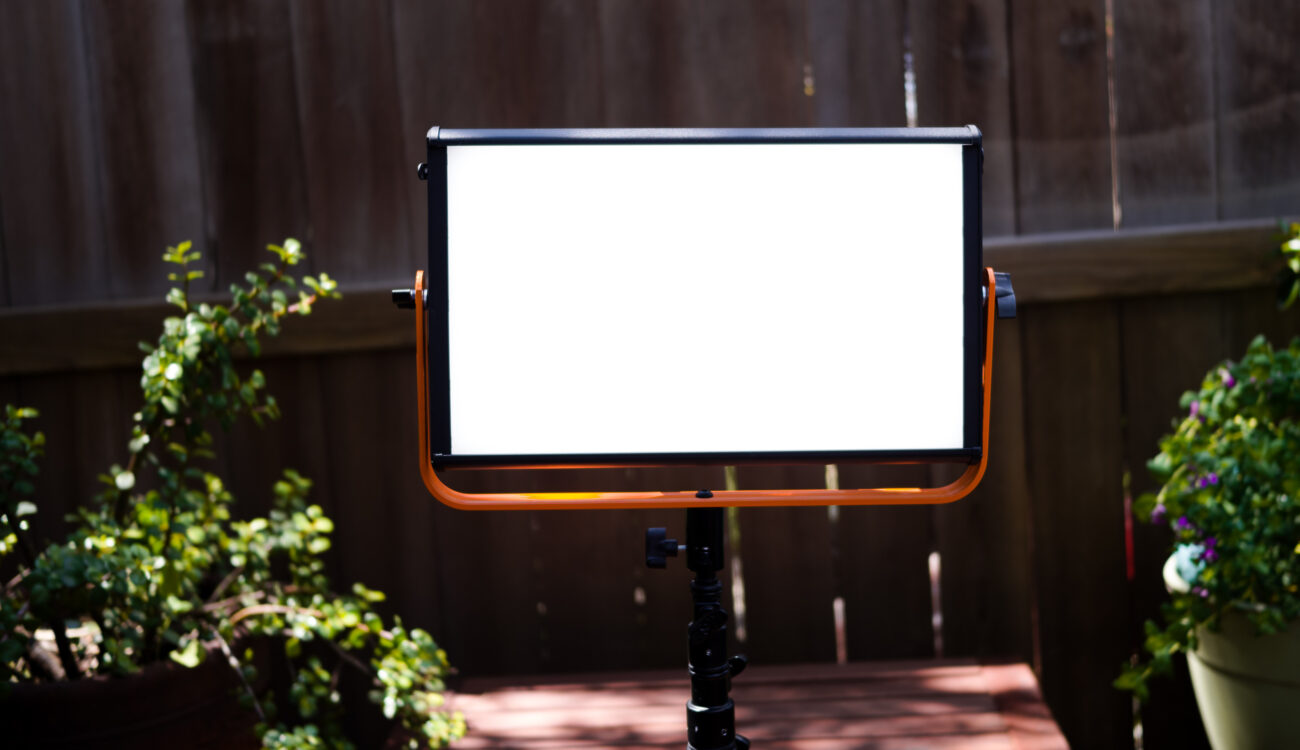 You may be most familiar with Dynacore as a battery manufacturer and I was personally excited to have the opportunity to review their new DLS-2 60W bi-color LED panel light over several weeks during “stay at home orders” in California. They also sent over their new D-155MA batteries in gold mount for review alongside the DLS-2 fixture. Let’s dive in: 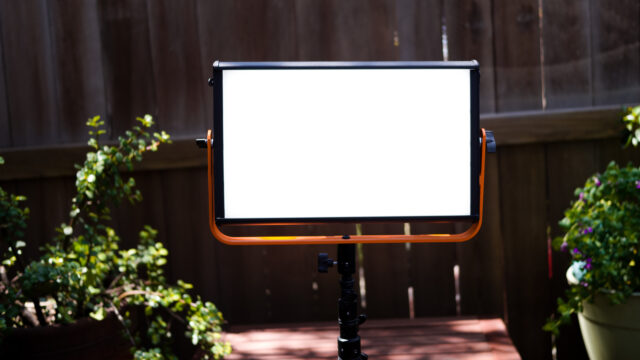 As more and more LED panel lights have flooded the market I’ll admit I’m becoming a little harder to please when it comes to this particular product category. There are just so many options out there. Of course this brings up the obvious point that not all these fixtures are created equal and at a price of $499 the DLS-2 is certainly on the more affordable side.

The DLS-2 60W fixture makes an impression out of the box with its orange paint job, low weight and thin form factor. It’s easy to get caught up in the fact that this isn’t a RGBWW light and it doesn’t include dozens of features like lightning and candlelight modes etc, but the point is that the vast majority of lighting that I’m (and I strongly suspect you) are engaging in these days is based around tried and true daylight and tungsten. 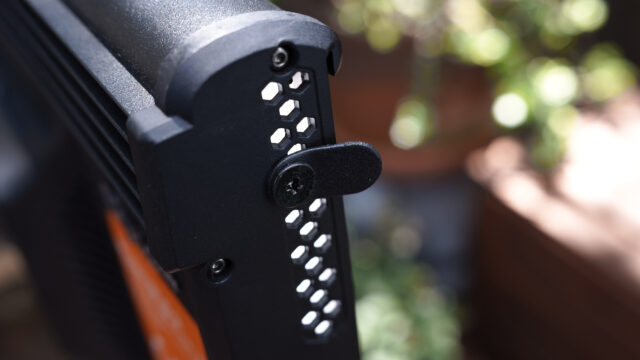 Sturdy metal barn doors ship with the light and are held in place by a rock solid philips screw/metal tab combo (pictured above). This works to keep the barn doors from ever slipping out, but the metal tab can be very hard to pivot by hand and might require using a screw driver. 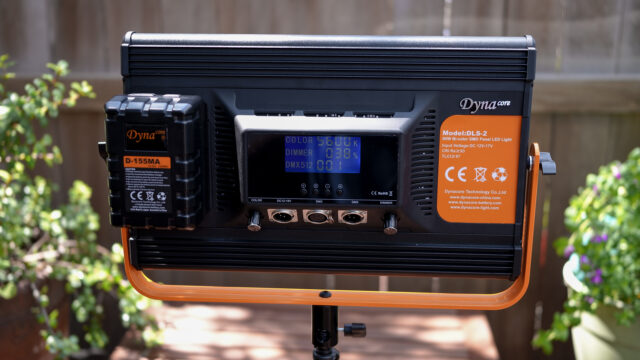 The DLS-2 has a bright rear LCD screen (pictured above) and it’s easy to change DMX 512 channels and to power on and off and that’s really the extent of it. Two rear knobs allow you to change intensity between 1% – 100% and between 3200 and 5600 kelvin respectively and the control is instantaneous and easy. It seems like you should be able to do more with the rear LCD and it is a little odd that you can also control the intensity and color with rear + & – buttons as well as the knobs — it feels like an unnecessarily redundant design feature.

As great as it looks I do worry to orange paint might catch a reflection or two on-location that the standard boring matte black paint job of other fixtures wouldn’t. 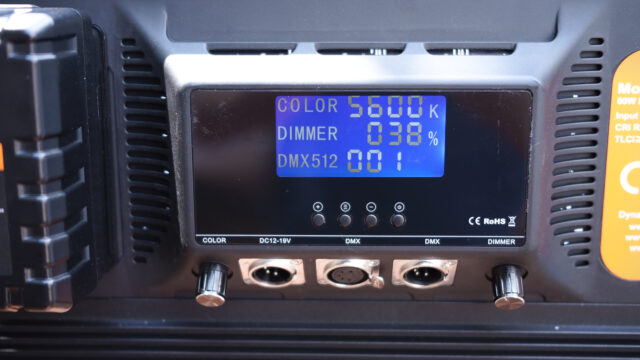 Personally I’m an all gold mount battery operation here and the Dynacore D-155MA batteries power the DLS-2 light for hours and hours at lower intensities. Wall power is also an option through 4-pin XLR input. I wish the feeder cable between the XLR input (pictured above) and the power brick was a little longer as you’ll find yourself clamping it or bongo tying it to c-stands if you need to put the light up in the air on a stand for any reason.  Additionally, the battery plate won’t allow you to easily slide the battery out if the light yoke is positioned anywhere but exactly vertical. I’m guessing this wouldn’t be an issue with the V-mount version of the light. 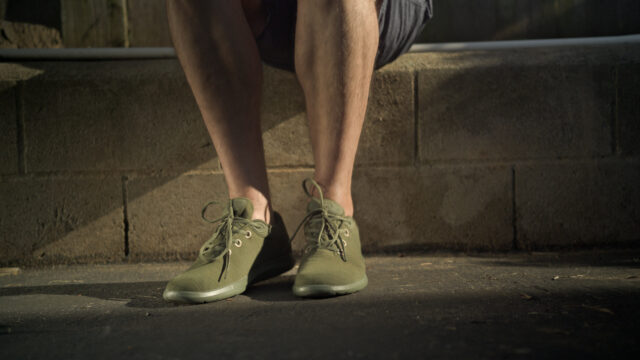 We used the Dynacore DLS-2 60W on a product commercial as a fill light. See a sample frame above. Image Credit: Rin Ehlers Sheldon

The fixture has a wide 120 degree throw with a built-in diffusion panel in front of the LED diodes.

Given the size and weight the output is impressive and I would compare it with the output of an Astra 4X if you’ve had the opportunity to work with that light before. You’ll find enough punch for plenty of interview applications and smaller scenes, but this obviously won’t be the fixture you’ll use outside at noon.

I grabbed a few measurements on my Sekonic C-700U Spectrometer of how accurately the DLS-2 handled color temp (kelvin) at a distance of 3ft. Here are my readings with a target of 5600K: 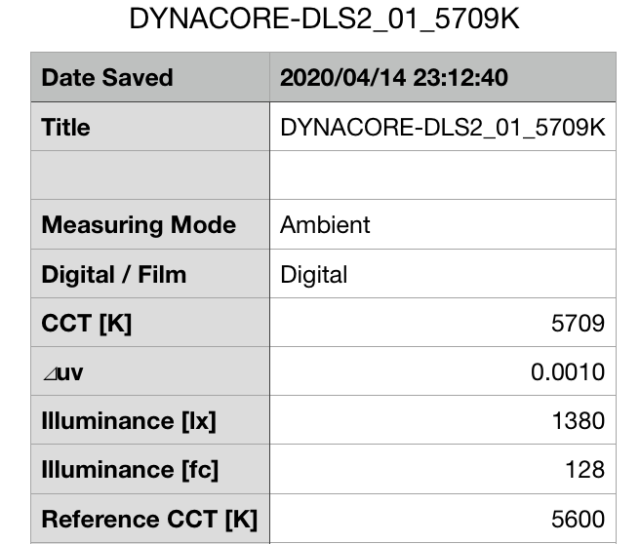 Again, fairly solid marks for the kelvin temp at 3200K.  We did see a notable drop in output from 1380 to 1150 once we switched over to Tungsten from Daylight. Not disastrous, but worth noting that your peek output with this fixture is at 5600K. I did test the light with a target of 4500K and received a reading of 4231K.

To check the color rendition I grabbed a quick reading with the light set to 5600K. 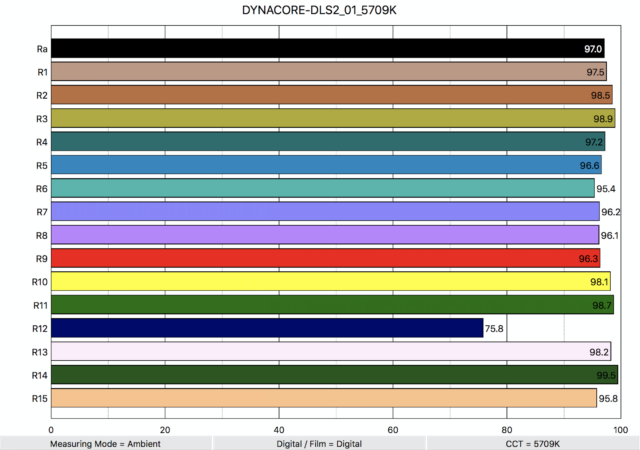 These results are excellent and I was generally seeing a 96 CRI average throughout testing at different color temperatures. This is especially impressive given the overall cost of the DLS-2 panel and shows how far we’ve come with LED tech as a whole. Would I use the DLS-2 panel in a professional production? Yes — especially on a travel show where transit space is at a premium. As I mentioned at the top, Dynacore is known primarily for batteries, but the DLS-2 is an impressive LED fixture at an affordable price point. 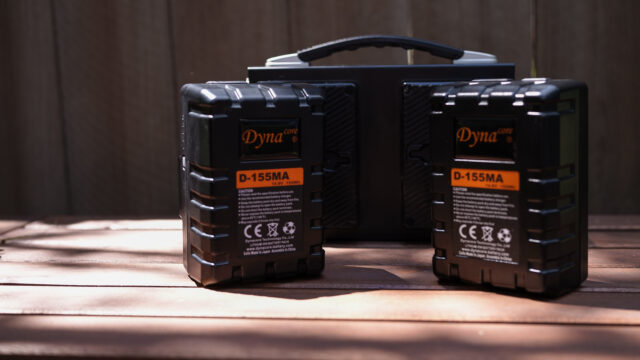 When you take the 2lbs D-155MA gold mount batteries out of the box it is clear that these batteries are mean’t to take a hit. They have a polycarbonate exterior and Dynacore says the internal cells are kept isolated for additional protection from impact damage. This isn’t the first 155Wh battery from Dynacore, but it seems the real change between the previous generation and this one is the attempt to make a rugged and low profile battery. I compared the battery in size to a 150Wh bebob mini battery I have and the D-155MA is just slightly larger, but qualifies as low profile in my opinion. I’m sure we all have used 150Wh batteries in the past with terrible form factors that are bulky and hard to mount with accessories and that is not the case here. Each battery includes a single USB and D-Tap out (max output 100w) and the USB out charged my phone for hours and hours and… hours. Having a D-Tap out is becoming more and more standard for charging accessories and that’s welcome too. It’s worth noting that I tried using these batteries on a few different chargers and I only had success using the Dynacore branded charger — something to keep in mind.

The 2lbs DS-2A charger does have a built in fan that gets considerably noisy while charging. Something to note of when recording audio. With a 2A output it does take time to charge the D-155MA’s to full, but they do both charge simultaneously.

Official Specs for the DS-2A charger below:

Official Specs for the D-155MA batteries below: 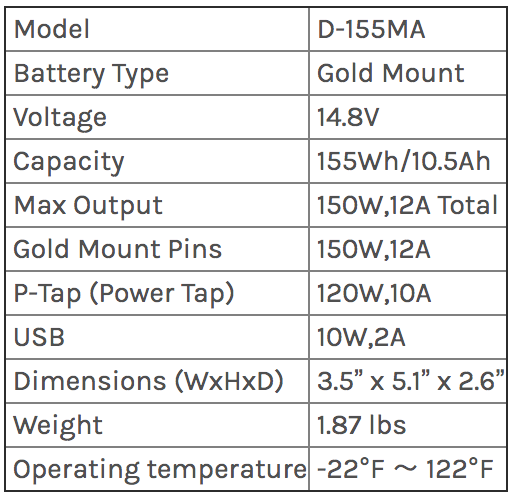 The real banner headline here though is the build of the D-155MA gold mounts. Time will tell, but I would expect these to be excellent additions to rental inventories and should hold up well over the long term.

Where is the Dynacore DLS-2 60W, DS-2A charger and DM-155MA battery series available? You can find them at Omega Broadcast in the US and at BBP lighting in Europe. Dynacore also offers a 120W variant of the DLS series.

Will you be an early adopter of the DLS-2 60W and the D-155MA gold mount batteries? Let us know in the comments below!