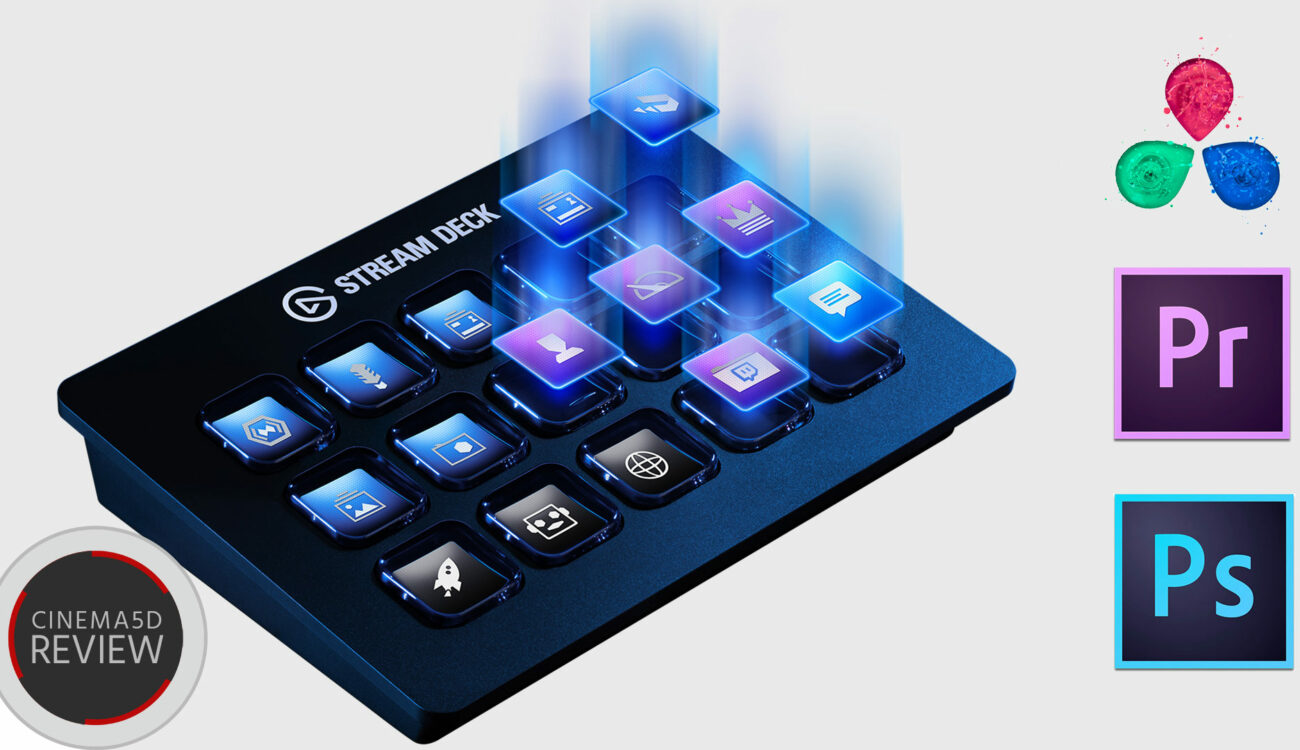 Meet the Elgato Stream Deck, a programmable keyboard designed specifically for the needs of gamers. Wait, what? Well, rest assured: there’s more to it because this little device has the potential of simplifying and speeding up your post-production workflow just as much as it steps up the pro gamers’ game. 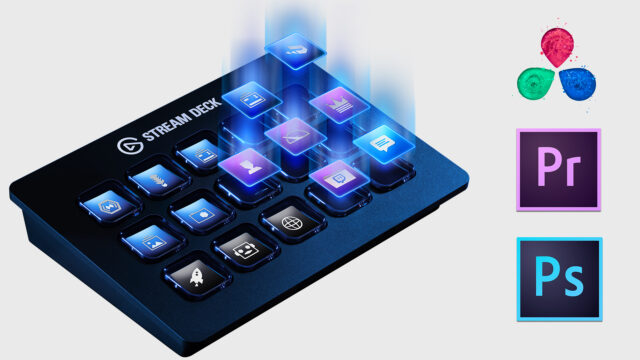 The Elgato Stream Deck isn’t a pro video device. It’s designed for hardcore gamers who stream their gameplay using Twitch and other platforms. They make extensive use of shortcuts for all sorts of things: chatting with other gamers, capturing screenshots and performing complex combinations of different actions of their virtual heroes. The Stream Deck helps them to do all this at peak performance and speed by providing a set of 15 buttons which can be programmed to your liking.

Everybody loves keyboard shortcuts as they eliminate the need for a mouse for a specific command. The downside is that you have to memorize all these shortcuts for all these different applications. Grab a still in DaVinci Resolve? ⌘⌥G. Toggle an image to black & white in Photoshop? ⌥⇧⌘B. Did you know that one by heart? Really?

If you’re sitting in front of your computer 24/7 this shouldn’t be an issue, but if you (like me) find yourself clicking around the menus on the hunt for that command that you just can’t remember the shortcut for anymore, then Stream Deck could be a big time saver.

Although somewhat reminiscent of an external number pad, each of the buttons on the Stream Deck doubles as an LCD screen. This allows you to know exactly what kind of command you’re about to trigger when hitting that button.

The list of preset actions is limited to a range of gaming-related set of commands for now, but there’s one section of interest for post-production workflows. In the System section there is one particular item which is the focus of this whole article: Hotkey.

In order to program the Stream Deck you’ll need to install the accompanying software. With it you can just drag and drop functions like the above-mentioned hotkey to each of the 15 LCD buttons. Each button can also act as a “folder”, giving you a total of 225 buttons: 15 folders with 14 assignable buttons in each plus one “go to top” button that is created automatically. 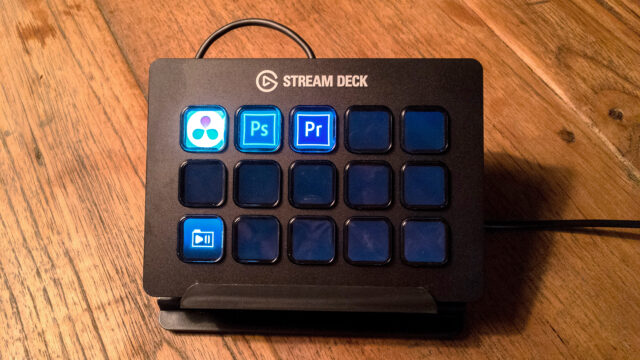 You can also assign an app launcher to a button. In my setup, I have given folders application icons, and inside each folder is a launcher for that app plus several hotkey functions I use frequently. 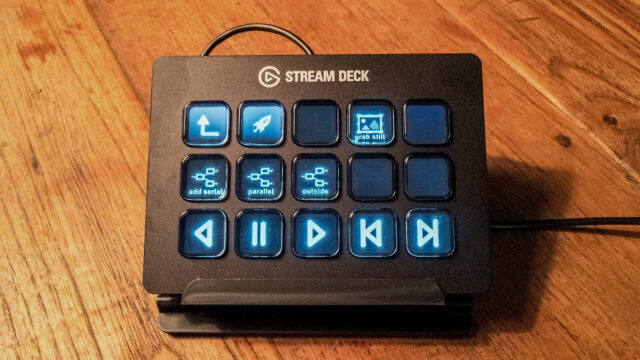 Shorctus for DaVinci Resolve. The rocket will launch the app.

In my example, I quickly created a bunch of icons for things like JKL control, previous and next clip, adding different nodes and one shortcut for grabbing stills. It’s not super advanced, but I find it very convenient to not have to reach out for the keyboard for every basic task. Your setup can be completely different, of course – therein lies the beauty of this device!

Once you’re done programming the Stream Deck you can export your setup to a file. That way you can import several sets of configurations if needed. 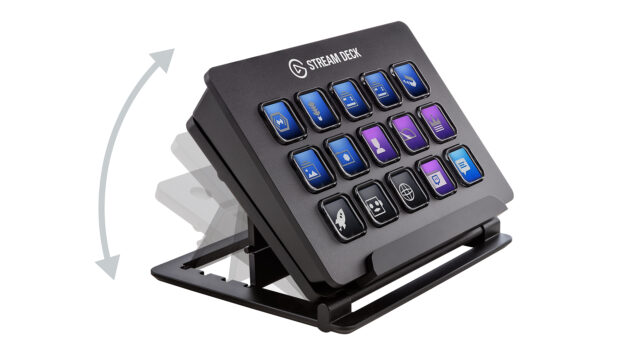 The top plate is made of metal so the device doesn’t feel plasticky at all. The buttons stick out quite a bit, so if you’re used to the butterfly keys of the new Macbook Pro you will have to press harder than usual in order to activate the buttons. It’s not bad, it’s just a bit unfamiliar, at least to me. The pressure point feels a little soft but with a good bounce, so these buttons seem to be built for some serious hitting!

The stand is basic but functional. You can adjust it to several angles and then just slide the Stream Deck into place. A certain angle seems to be necessary since the actual LCD screens sit a bit below the button surface and therefore the displayed icons are much clearer when viewed straight on.

Features of the Future

Since the Stream Deck was originally designed for gamers, it’s not perfect for postproduction workflows. But that’s OK. Since having the device here for testing, several updates have been released already. Elgato seem to have an open ear for their community and they will expand the set of features over time.

Some things that would be really nice to see for our line of post production work:

All this is possible I assume. But again, the Stream Deck wasn’t designed for post production workflows. So nobody’s to blame here, really. It’s just that since all of this seems actually possible, it would be nice to see these features sometime in the future, right?

There are alternatives out there, obviously. For DaVinci Resolve you can choose from a range of pro control surfaces, ranging from $1,000 – $30,000. The Stream Deck is $150, making the comparison a bit apples and oranges. The Blackmagic Design control surfaces are far more advanced and complex, but on the other hand they only work with one single application. 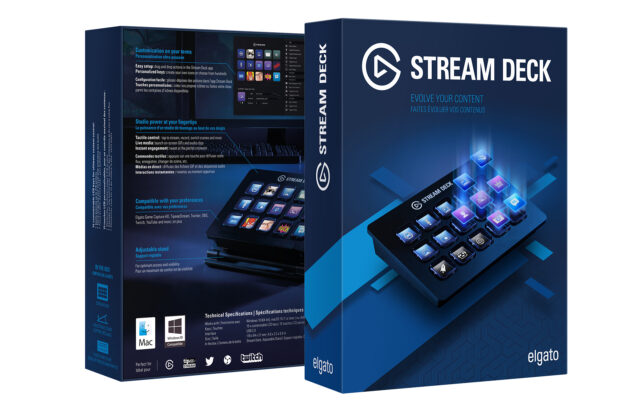 Then there are the X-Keys keyboards which are more in the same league with the Stream Deck. The X-Keys XK-24 USB keypad offers the same functionality for the same price, but lacks the LCD screens, so you have to add your own little paper icons. I think the Stream Deck, although mostly aimed for gamers, is the better and more flexible device.

What do you think? Which hotkeys would you use with this device? Or is a pro control surface the way to go? Share your thoughts in the comments below!