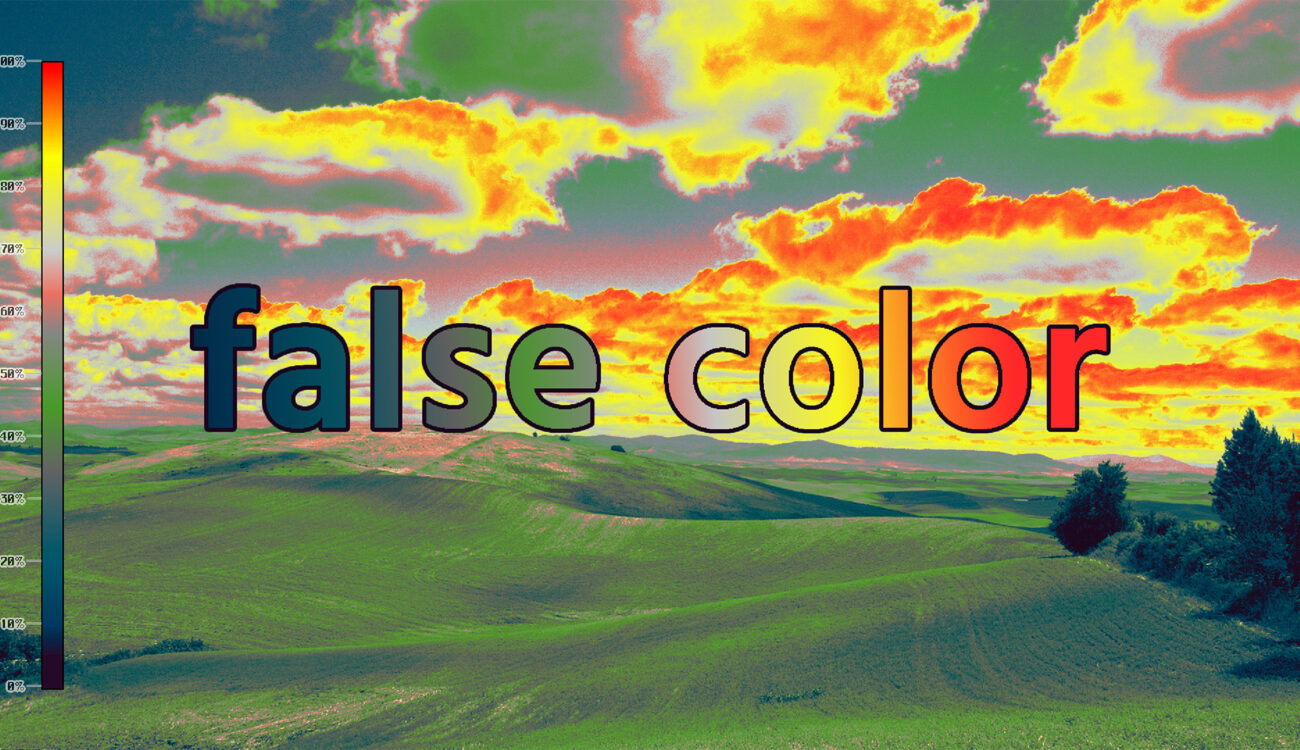 If you are used to working with professional monitoring equipment on set or in post, it’s more than likely that you’re familiar with the concept of false color for controlling exposure or for matching different shots. Tomasz Huczek from timeinpixels.com is (see update at the end of this article) done with version 2 of his OpenFX plugin for you to benefit from false color within DaVinci Resolve and other applications alike.

What is false color?

False color is a concept for examining exposure in a given shot, just like a zebra pattern only far more advanced. When activating false color mode on a certain monitor, the incoming video signal will be processed in a way that well-defined areas of brightness values are mapped to a specific color range. 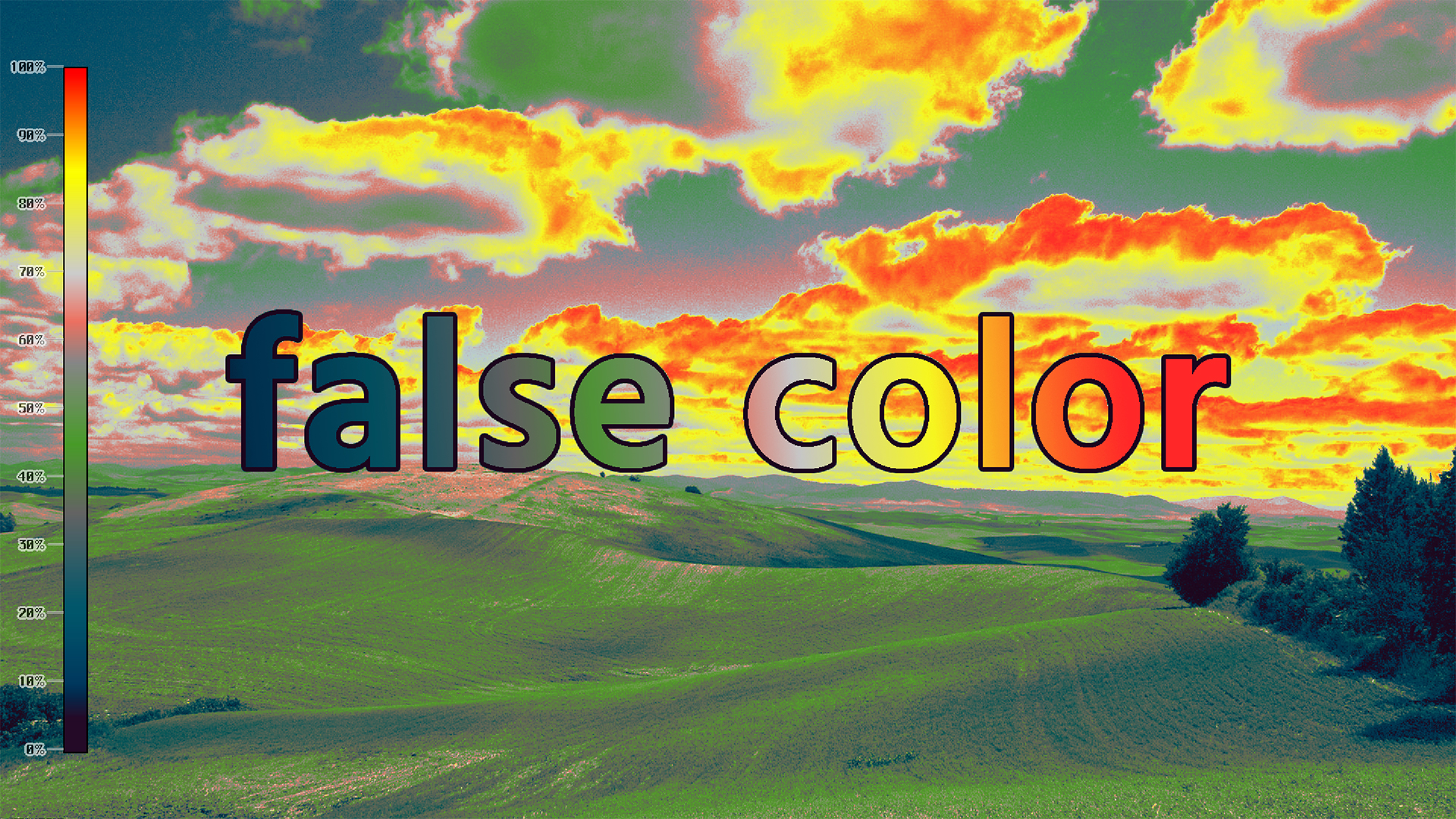 As you can see, the clouds are a bit overexposed in this example

For example, everything above 90% brightness will be colored in red, skin tones (depending on your given scene maybe at around 70%) will be displayed in gray and so on. That way, you’ll get an oddly colored image, but you can spot overexposed parts in the blink of an eye while checking for correct skin tones at the same time. Depending on your workflow, looking at the given image is far easier rather than looking at scopes as you’re able to see both, your video feed and the exposure overlay at the same time and in the same window.

The plugin, developed by Tomasz Huczek, brings this functionality to DaVinci Resolve in the form of an OpenFX plugin which means it works in other programs like Scratch, Nuke, and Sony Vegas, too. The plugin can be extremely helpful in the process of matching shots in terms of consistent contrast and lighting ratios in an edited sequence. It’s available for both Windows and Macintosh platform and the best thing: . (see update at the end of this article)

The workflow for DaVinci Resolve would be this: select the false color OpenFX effect from the OpenFX tab in the upper right corner of your screen when working on the color tab. Drag it onto a node and you’ll see the effect immediately. Personally, I would use a dedicated node just after the first node which contains primary corrections. That way, you can match different shots and add more artistic secondary grades later on. Also, you can toggle the node which contains the false color plugin on and off to see the plain image when done with false color mode.

You can adjust each value to your liking, so the plugin is very flexible, yet pretty simple to use.

Still in beta (not anymore – see update below)

One thing to remember is that the current version of the OpenFX plugin (ver. 2b1) is still in beta. That means certain features are still missing, such as presets. Presets can be very handy as they are designed to mimic false color modes of popular cameras and monitors such as the RED false color scheme or the smallHD scheme for example. That way you can use the color scheme you are used to the most. The first version of the plugin had this functionality, so it is more than likely to see it in version 2 as well.

Tomasz told me that the final version is pretty close but since he is the only developer these things take time, for sure. If you like what this plugin can do for you and your workflow, please consider donating a small amount.

Help me out to bring an even better plugin in the version 2.0. The list of the desired features is long and all the development requires a lot of time. By donating you allow me to spend more free time on this project and deliver the upgraded version to you sooner!

Right now, Tom is working hard to release version 2.0 with support for presets and configurable ranges for 0 IRE, 100 IRE and range defined by user (or predefined for skin tones).

Plans for the future

Latest news is that Tom started working on a plugin version for Adobe Premiere and After Effects, so if everything is going according to plan, he will release the beta version for the Adobe software together with the official 2.0 Open FX version for Resolve, Nuke and Sony Vegas.

Make sure to check out Tomasz’s site (timeinpixels.com) for downloading the plugin, as well as his photography portfolio.

You can download the latest version of DaVinci Resolve here for free.

Tom was quite busy since the release of this article! As of today, version 2.3 is out and it packs a lot of features, check it out here. The whole plugin has been revamped from ground up and there’s a new pricing model, too. There is still a free version available but it’s limited to the RED false color scheme. The more powerful and highly customizable version is $8.99 (OFX or Adobe CC). If you need both of these versions, you can purchase a bundled version for $14.99.

As you can see the plugin is no longer free of charge but to me, for less than $10 it’s quite a lot of value. Tom has put together a nice roundup of all the features and usages of this nifty plugin, after digesting this guide you will agree with me, I’m sure!